In this exclusive interview (don’t they always call it “exclusive” to make it sound cool?) I talk to Mitchell Baker the Chairperson and Chief Lizard Wrangler of Mozilla about how you go from a failure to 24% market share using primarily volunteer labor across the world. Links from our discussion include Mitchell and John Lilly’s op-ed piece on Net Neutrality at the Wall Street Journal: http://online.wsj.com and labs.mozilla.org and browser Market Share by Net Applications at marketshare.hitslink.com. Also Mitchell’s blog at blog.lizardwrangler.com.

Listen to the Podcast Once (45 min) 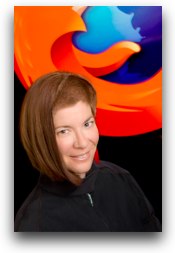 I have the great pleasure of introducing to you to  Mitchell Baker, the Chairperson of the Mozilla Foundation, the people who bring us the Firefox web browser and the Thunderbird email client.  Welcome to the show!