Remember my adventures from getting the iPhone 4 and the new iPad? I made it my quest to make it even HARDER for the iPhone 5 – tune in to find out how that worked out for me. Andy Dolph send in a great recording explaining the differences between different audio compression methods. In Chit Chat Across the Pond, after eating a LOT of security vegetables Bart and I talk about ways to really get the most out of using the Finder.

Hi this is Allison Sheridan of the NosillaCast Mac Podcast, hosted at Podfeet.com, a technology geek podcast with an EVER so slight Macintosh bias. Today is Sunday September 23, 2012 and this is show number 385. On today’s show, Bart and I had too much fun, so since Chit Chat Across the Pond ran pretty long, I’m going to have a relatively shorter front section of the show. Let’s face it, you all tune in to hear Bart anyway, so you’re probably relieved! Don’t worry though, I moved some of the other things I was going to say to next week. I do want to tell you my story of adventure of getting the new iPhone five and Andy Dolph is going to join us to discuss audio compression and the different options you have available to you. this is his first recording for the Nosillacast and I think I’m going have to invite him back because he’s great.

iPhone 4 – wanted to be FIRST!

New iPad – wanted to be FIRST!

iPhone 5 – wanted to be FIRST! 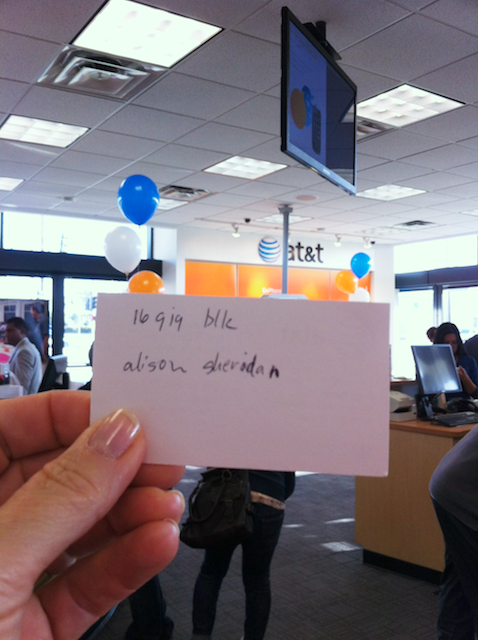 Andy Dolph was listening to last week’s show when Tim Verpoorten happened to mention something about compressing audio. Andy wanted to elaborate on audio compression and I think you’ll enjoy learning from him, I certainly did.

Hi Allison, I was listening to your latest show and in the section with Tim, he talked about converting audio files (which is a common enough thing)but he commented on converting mp3 to mp2 or wav – which is a really bad idea. As an audio engineer these things drive me nuts.

I won’t go into all the details here, here’s a little segment I recorded for you simplifying the different kind of audio codecs we use, and when/why certain conversions are a good idea or a bad idea…

You can find Andy’s podcast at Holistic Money Radio at loveandmoneyrevolution.com/radio

My son Kyle had a terrific internship this summer at British Petroleum as a chemical engineering student. The internship was great because of how much cool work they gave him. He got to do three major projects, one of which required him to learn VBA in order to script Excel to make sense out of giant wads of data being created in the refinery. Of course since he’s Steve and my son he was brilliant at all of this, and two days before his last day he had a final out briefing on his projects. That left him two days with nothing to do.

Most people would goof around on Facebook or Twitter or maybe even read a book, but Kyle had a better idea. He decided to download ScreenSteps and start documenting his work. When you have kids, you pretty much assume that they don’t listen to a word you said, but somewhere along the line you realize they HAVE been listening. I couldn’t have been happier when Kyle called me asking some questions about exactly how to do a particular screenshot. I couldn’t have been more proud!

Even better he taught me something. When you take a screenshot in ScreenSteps, you get a bunch of choices, one of which is to use the same area where you took a shot before. This is super handy when you’re filling out a form and you want to take shots along the way, or different states of the same window. So you tell ScreenSteps to take the shot, and then hit R for the previous capture area. What I didn’t know was that if you hit R again you get the shot area before that. You can keep hitting R going back in time to previous shot areas. Pretty cool that he figured out something I didn’t even know.

I should mention that Kyle was running Windows at the time. You can actually get a license for ScreenSteps that works on both Windows and Mac! It’s not cross platform software but they want to keep you working as a slider so they make it easy for you to use both platforms with no pain. The other nice thing is that they have a free 14 day trial so you can actually get the feel of the software and how it works before you plunk down your hard earned cash. Check out ScreenSteps at BlueMangoLearning.com and be sure to tell them Allison sent you!

Where I was trying to get to when I got lost last time:

It’s a place called “The Wonderful Barn” and is an architecturally very unique and special building, yet, it’s not even signposted, let alone developed for tourism. It was built in 1743, and was built as a strange mix of the practical and the frivolous. The reason it looks so unusual, is that it served as a focal point at the end of one of the vistas in Casteltown Estate (a near-by Palladian manor), so it’s what we know in Ireland as a folly. But unlike most follies, it served a practical purpose too, being a granary. Also quick plug to anyone in the Maynooth area in the next few weeks – the Russel Library in St. Patrick’s College has an exhibition on the architect August Pugin, who designed the grandest of the buildings in the college. In Ireland his work in SPCM is probably his most famous work, but globally he’s probably best known as the designer of the interiors of the houses of parliament in London. I spent a very pleasant afternoon there today-http://library.nuim.ie/russell

Main Topic – Getting the Most out of the Finder

Since our recent discussion of proxy icons was so popular, I thought it might be worth going through some of the ‘power features’ of the Finder, and to share some of my tips for making the most out of the Finder.

I haven’t forgotten that I promised to talk about Linux on old Macs, I’m still experimenting away and will report back soon. I’ve managed to acquire a G4 iMac, a PowerMac G5 and a 32bit Intel MBP to test with. 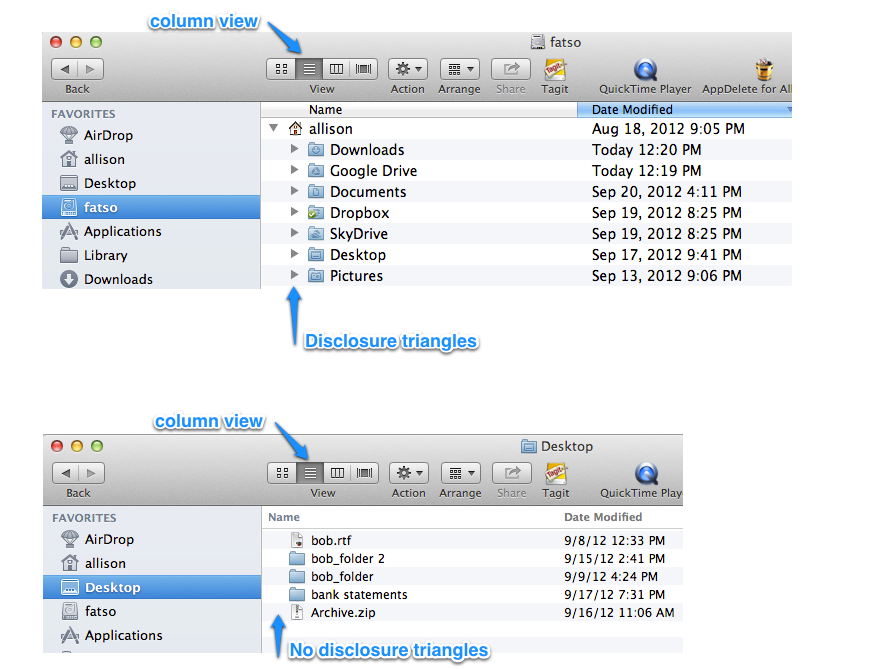 After Bart and I stopped recording, it was still bugging us why I couldn’t use the right arrows to open a folder in the list view. We got the idea to test it on Steve’s machine to make sure it wasn’t some goofy utility I’d installed. And of course it did work on Steve’s Mac, but then I noticed something else – his folders had little disclosure triangles on them, but mine didn’t. Then I tried a few more folders and some of them DID have disclosure triangles. What the heck is going on here? I whipped open my trusty Clarify, took a couple of screenshots, annotated them and combined them into one shot using Pixelmator. Then I took a screenshot of THAT with Skitch (I have to use ALL my tools, right?) and shared it to Twitter.

In a few minutes, Pramit Nairi (@pramitnairi) had the answer. Turns out how you have the folder set in View Options changes whether you get your disclosure triangles. If you set that to anything BUT “none”, you lose them. Now how’s that for an obscure detail to know? Gotta love Twitter though for quick answers, and Pramit for knowing the answer! Plus Bart and I can sleep at night now.

That’s going to wind this up for this week, many thanks to our sponsor for helping to pay the bills, Blue Mango Learning at bluemangolearning.com makers of ScreenSteps and Clarify. Don’t forget to send in your Dumb Questions, comments and suggestions by emailing me at allison@podfeet.com, follow me on twitter at @podfeet. I contribute a fair amount over on Google Plus nowadays so just search for me by name if you want to circle me up. If you want to join in the fun of the live show, head on over to podfeet.com/live on Sunday nights at 5pm Pacific Time and join the friendly and enthusiastic NosillaCastaways. Thanks for listening, and stay subscribed.

17 thoughts on “#385 iPhone 5 Adventures, Audio Compression, Getting the Most Out of Finder”