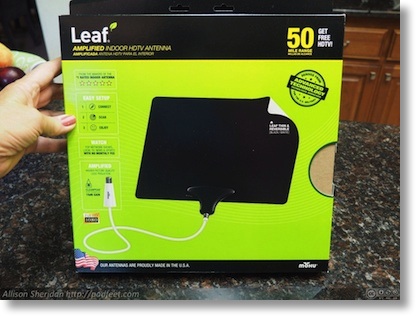 Steve and I are big fans of television and we really like the content we get from cable. We have 5 TVs, 3 of which have TiVos on them with cable cards so we can watch and record a ton of TV. We also like Internet TV content. We use Amazon Instant Video to rent movies whenever our iTunes on our AppleTV decides to be stupid and not let us watch the movies we rent. We love Netflix for shows like House of Cards and Orange is the New Black. We have a Roku and a Chromecast for entertainment too. We’re pretty much TV addicts.

We watch Tom Merritt and Brian Brushwood on Cordkillers every week and dream of a world when we can watch what we want, when we want on any darn device we want. We hear about people killing the cord or cutting the cable and dream of having that kind of courage … but did I mention that we really like TV?

Getting over the air TV sounds really fun though, so we wanted to see if we had some way to dip our toes in on this revolution. We heard Tom and Brian talking about the Leaf Antenna, which ranges in cost from about $35-70 depending on how much range you need. Since it’s an indoor antenna, that means no climbing on the roof for installation.

I mentioned that we have 5 TVs, 3 with TiVos/Cable Cards, but the other 2 TVs have nasty old cable boxes. The kitchen cable box absolutely REFUSES to obey the remote control if I’m holding it. I don’t know how this can be, but I can stand 6 inches from the box and it will take me maybe 6 tries to actually turn off the dang TV. I hate that thing. The other room with a cable box is a spare bedroom, so that TV gets used maybe a half dozen times a year when my daughter comes to visit.

Verizon gave me a deal on the 2 cable boxes, pay for 1, get the 2nd one free, but still it’s an unnecessary $10/month, right? It’s important to step back and do some math here. The 50 mile range Leaf antenna is around $70, so it would pay off in 7 months. Except buying ONE antenna won’t save us a dime because we get one box for free. So we have to buy 2 antennas, which means it’s 14 months to pay off. Ok, that’s still fun. However, the TV in the spare bedroom is a GIANT CRT that won’t take a digital antenna without an adapter box, so we might as well buy a new TV. Let’s just say we can spend only $300 on a new TV. So we’ve got $70 x 2 + $300 ÷ 10, carry the 2, add in your phone number if it’s a leap year and this will take 28 years to pay off. So we’re doing it anyway.

It was pretty fun to set up. Steve is the electrical engineer in the family (I’m mechanical) so I had to fight him to get to do it myself. I’m sure that’s a typical argument in your house, right? Anyway, the Leaf antenna is a 12×12 inch flat device, maybe 1/16th inch thick. It’s black on one side, white on the other just to match your preference in color. It’s even paintable so you can camouflage it. There’s a cable that connects first to your TV via coax with an amplifier about 12 inches away. The amplifier requires power to operate, which is provided via a USB cable connected to the amplifier. If you have a TV that has a USB port, you can power it directly from the TV, but they also include a USB wall charger. It also comes with a 16ft (5m in real units) coax cable to plug into your TV which lets you position the antenna to a location for best reception and convenience.

According to the manufacturers, the amplifier has “Clean Peak filter technology” providing 15db of gain. To be perfectly honest, I haven’t a clue what that actually means. I asked Steve to explain. He explained that adding gain with an amplifier means it boosts the TV signal level, where 15db of gain is a factor of 30 increase in signal power.

He was a little bit concerned about the design. Remember that the amplifier is close to the TV, not the antenna itself. He went on to explain that it is best to have the gain as close to the antenna as possible to maximize the signal-to-noise ratio (SNR) for the best channel reception. Since the cable between the antenna and the amplifier is 16ft, it degrades the signal somewhat and introduces some noise. However coax cable minimizes the signal loss over this distance, because coax is about the least lossy cable type you can use.

I’ve managed to make this a 20 minute explanation of about 2 minutes of set up. I turned on the TV, told it to scan for channels, and after about 5 minutes and some positioning of the antenna, we we able to receive all of our local OTA (Over the Air) channels cleanly without signal break-up. In the literature they say the Leaf is a multi-directional antenna with no pointing needed, but we don’t buy that. We were able to basically get a good signal and then get no signal by turning it 90 degrees. So in both rooms we were able to get a ton of channels – some of which were in English. We got the network channels, NBC, ABC, CBS, FOX, and a few local channels, all in beautiful HD. We also got Japanese, Korean, Vietnamese, and Spanish channels. Oddly my favorite thing we found was that in the middle of the day, KTLA Channel 5 plays awesome shows like Father Knows Best, Flipper, and the Partridge Family. These are the shows of my youth.

Bottom line? Goodbye cable boxes for our two little-used TVs. We now receive our local HDTV channels free of charge, and with no video compression that cable providers and ISP’s typically apply to their video feeds. We are happy campers.