Last week I talked about the awesome $5 app for the iPad (and iPhone) MultiCam from RecoLive that lets you record a multi-camera session using cameras on your iOS devices and Mac and even your desktop. I had one complaint that I wasn’t able to use an external mic, because Multi-Cam simply didn’t have an option to choose between microphones. I tried to use a USB mic plugged into the iPad but I think because I had to use not only the Camera Connection Kit but also the 9 pin to 30 pin dock connector adapter, the iPad just said it wasn’t supported. 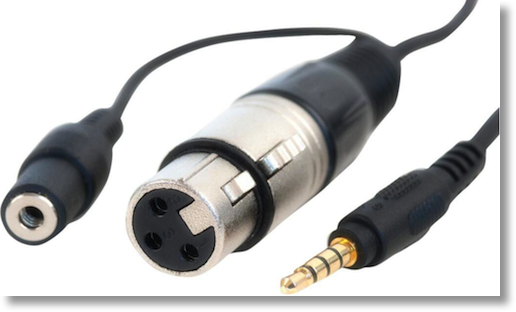 This week I remembered that ages ago Steve bought me a device called the ProJive XLR from CableJive that might do the trick. Big girl mics have XLR connectors, which is a three-pin connector, and the ProJive accepts the XLR connector. On the other end it has an audio connector that you plug into the headphone jack on the iOS device. I’ll never understand how you can use a microphone by plugging into a headphone jack, but it actually works. The ProJive also has a monitor cable so you can plug in a set of headphones to monitor your own audio.

I plugged my Heil PR40 into the ProJive, and the audio jack into the iPad and fired up MultiCam and it worked perfectly – good audio AND video!

One other note, last week during the live show I hung up on the audience from the $400 Mac OS app Wirecast Studio, and then fired up RecoLive’s Switcher iPad app and I successfully sent video to the live audience over on Justin.tv. There was much enjoyment! Steve and I got excited that I could actually do the live show this way till we realized that if I do it that way, my microphone won’t actually record into GarageBand … so there would be no podcast! I guess I’m going to end up dusting off my giant, complex, mixer if I’m going to keep experimenting with this…