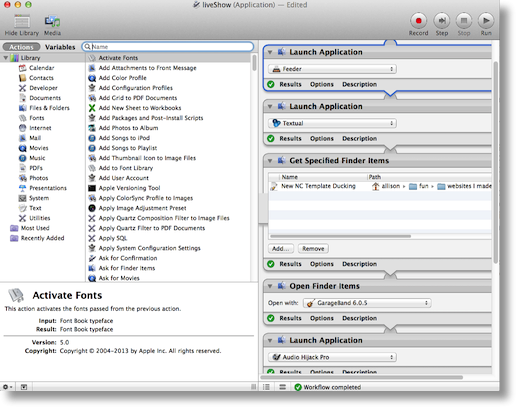 Every Sunday night between 4:30 and 4:45pm, I get ready to do the live show. It’s a pretty complex operation (I even have a diagram). Most of the hardware pieces are plugged in all the time, my microphone, my camera, and my Mac, but I run seven applications on my main Mac to get the show to come out in video on Justin.tv, and audio on Alpha Geek Radio and the NosillaCast app and podfeet.com/live. The diagram is terrifying to most people but I’ve been doing this for a while so I’ve pretty much got the hang of it. Every once in a while I may forget a step but it’s pretty obvious what I forgot since something just won’t work. This week I was jogging on the beach when it occurred to me that Dorothy (aka @maclurker) should really automate some of this for me. She’s the one who automated the back end for me, so once the show is done I push a button and the audio file gets encoded properly with all the right ID3 tags and such for iTunes. The only problem is that she’s off on her silly boat with her husband (or is it silly husband with boat) up to Canada. Yeah, she left me. Sure she’s got Internets most days but it’s not the same. I decided that I would try to give this automation thing a crack on my own. I figured I’d get stuck, because inevitably whatever I want to automate ends up needing AppleScript and we’re way past my pay grade. I had nothing to lose though, and I could torture Dorothy on her trip with endless questions when it didn’t work out, so that would be fun too. Let’s review what I have to launch every week:

That’s not too bad, 5 applications just need to launch and 2 need specific files launched. I should be able to crack the code on this! I will definitely spare you the missteps I encountered in my ignorance of using Automator, and instead walk you through how easy this actually was. I did a search for Open and luckily Automator figured out what I meant and showed me the Launch Application which was buried in Utilities where I never would have found it. From there I simply dragged Launch Application into the main window and it showed me that it would open Contacts by default because it’s first alphabetically in my list of applications. I changed the pulldown to the application I needed, and then did a rinse and repeat on the other 6. Just like that I had a workflow. I pushed run and surprisingly most of it worked! I had to figure out how to launch those two particular files. For GarageBand I used an action called Get Specified Finder Items, and browsed to my configuration file. Then right after that I dragged in Open Finder Items and set the Open With pulldown to GarageBand. Basically I told it to go find the file, and to open it with the right application. It didn’t work at first because Automator grabbed the wrong GarageBand, so I pointed it at the right one. I had more problems with Wirecast Studio, for some reason it just simply barfed on opening the file. It would launch Wirecast just fine but then hang up. I had to crash out a bunch of times. Oddly if I opened it by hand and opened that file it worked just fine. I even tried dragging in a Launch Application action to get Wirecast up first and then open the file but it wasn’t happy with that either. I suspect it’s actually a problem with Wirecast Studio, it’s kind of an odd application. The good news is it motivated me to go into the preferences of Wirecast and look to see if there was a way to tell it to always open that file. Duh, it was in the preferences. All these years I’ve been launching Wirecast, closing the default file, and opening the real one. I’m an idiot, but at least now I can make my Automator workflow just Launch Wirecast. I created this in Automator as a Workflow so I only needed to save it as an Application and now I can launch it with Spotlight or Alfred and just like that, my 5 minutes of opening applications and getting the right files in them is automated. I’m really proud of myself. Hope this inspired you to try your hand at Automator to get rid of some annoying repetitive tasks you have to do. If I can do it, anybody can!