I’m still having a ball with my new mirrorless camera (the Olympus OM-D EM-10). When I first started looking into this I mentioned that I was going to make the switch to my friend Diane. For some odd reason she trusts my judgment and said, “great, when you decide, let me know what to buy”. Like me, she loved her big girl camera but didn’t enjoy lugging it around. I remember when she was going to France and debating what lens to bring because she just couldn’t bear the idea of bringing more than one.

After I did the research and bought mine, we went out and bought one for her too. She loved it at first sight and has gotten very adept with it very quickly. We both bought our cameras with a 14-42mm kit lens. I have to take a break here and explain crop factors because this whole story won’t make sense without it.

Crop factor is a ratio of the sensor size in a camera relative to a reference format, which is the old 35mm film cameras. You’ll hear people talk about a digital camera with a full frame sensor, that means the imaging area is the same as a 35mm film image area. Diane and I both had Nikon DSLRs, which had a crop factor of 1.5. That means to figure out the 35mm equivalent, you take the lens magnification you’re talking about and multiply times 1.5. So when we put a 40mm lens on our Nikon DSLRs, it’s really 40mm x 1.5 = 60mm equivalent. Make sense so far?

Ok, so our new mirrorless cameras are the Olympus E-M10, which has a crop fact of 2. I like it, the math is easier! When Diane and I were talking about lenses, she said she wanted a big zoom like the one she’d had on her Nikon, which zoomed up to 200mm. I explained to her that the 200mm lens on her Nikon with the 1.5 crop factor was equivalent to 200mm x 1.5 = 300mm. I then explained that she only needed to buy a 150mm lens for the Olympus because it has a 2x crop factor, 150mm x 2 = 300mm. Any chance you guys are still with me on all this math?

Diane believed me and bought a 40-150mm lens on my advice. She understood the math but said that she couldn’t feel it. She decided to do an experiment to prove it to herself. She took her Nikon D40 and put on her 18-200mm lens and zoomed all the way in. With the 1.5 crop factor that should be 300mm of zoom. Then she took her Olympus E-M10 and put on the 40-150 and zoomed it all the way in. With its 2x crop factor, that should also be 300mm. She set them side by side on a table with the bodies lined up and took a picture from each one of the same subject. 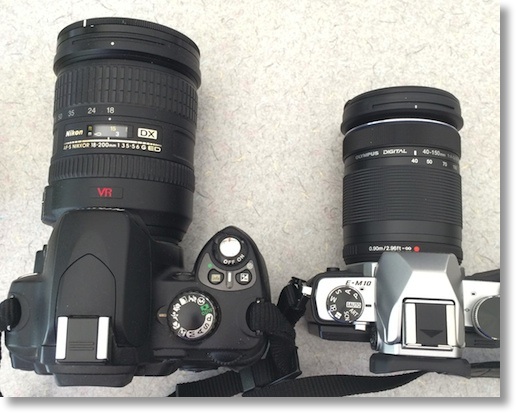 Her results completely confused me. The mirrorless Olympus E-M10 showed a more zoomed up image than the Nikon D40 DSLR. They weren’t off by a lot but there was definitely a significant difference. By the way, the images are in the shownotes so you can see what she found. I dashed off a note to Steven Goetz who convinced me to go down the mirrorless path, and is therefore obligated to answer every photography-related question I might have for the next 5 or so years. I asked him to explain how this could possibly be.

Steven came back with a fascinating answer that I never would have thought of. Evidently the lens that Diane was using, the Nikon AF-S NIKKOR 18-200mm allows you to focus on objects extremely close to the lens, as close as 8 inches from the front of the lens. This is extraordinarily close for a big zoom lens. Steven found out that there’s a trick though, the 200mm zoom is only achieved when focusing at infinity. If you think about it, you normally need/want a big zoom when something is very far away, so getting the full 200mm when focused at infinity is perfect. Steven went on to explain that when focusing on closer objects, the internal focusing of this particular lens deliberately shortens the focal length to achieve focus. Even though your lens dial shows 200mm of zoom, you’re not really zoomed up to 200mm. Isn’t that crazy?

Steven gave a link to KenRockwell.com if you want to read the full explanation of how this is accomplished. After learning all of this I ran the same test with my Nikon D40 and a Sigma 18-200mm lens compared to the same 40-150mm lens from Olympus that Diane was using. I got the same results. When I focused on something at a long distance, both cameras captured the same field of view. With something closer however, the Olympus lens zoomed in more than the Sigma. I am losing something though, the Olympus micro four thirds lens can only focus up to 35″ (.9m) away, while the Sigma could focus at 18″ (.45m), so half the distance. Anyway, I thought this whole thing was fascinating and I hope you did too. I’m not sure Diane will ever believe me again when I tell her this stuff though!