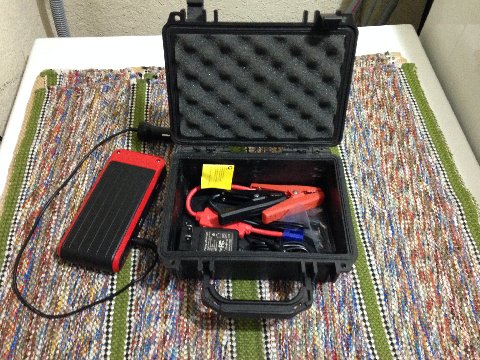 I have to set up this next segment. I was doodling around on Think Geek (as one does) and I came across a very silly thing. It was a small portable charger that they claimed could jump start a car. The description read like it was real, but I knew it had to be fake. Think Geek is like that, they’ll sell you a can of air if you don’t keep an eye on them. I showed it to Steve and he agreed it had to be a joke. I thought it was funny enough that I sent the link to Honda Bob. If you haven’t listened to the show for years, Honda Bob is our mechanic, who has been maintaining our cars for 35 years. He’s a good friend now and a great geek. I advertised for him on the show for years, and he became rather iconic as people did their own ads for him – the culmination being when Knightwise from Belgium did an ad entirely in the voice of a Klingon War Commander!

Anyway, Honda Bob decided to order the Powerall Deluxe to see if it would actually work. Here’s his review:

Last week, Allison told me about a device I might be interested in. I logged onto ThinkGeek.com, checked it out and decided to get one. Hello, Im Honda Bob and I want to review the POWER-ALL Portable Power Bank. It’s a portable power supply, car jump starter battery and a bright LED flashlight. It’s a portable, rechargeable high capacity, very powerful 12,000 mah battery that is very compact and lightweight. It only measures 6.5 x 3″ and it is only 1 1/2″ deep. It weighs only 14.5 ounces…that’s less than a pound! The jumper battery I had before weighted in at 16 pounds. 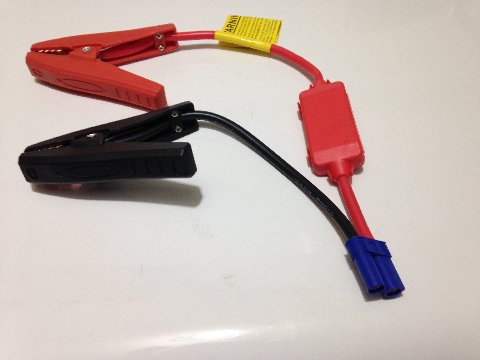 For me, it was the perfect solution because I don’t have to lug around a heavy device. Since I am mobile, the more weight I can remove from my service vehicle – the better. This device is able to charge two devices at the same time using USB ports. It comes with a multitude of adapters for just about any smart phone on the market,
as well as any tablets, cameras, camcorders, MP3 players, wireless headphones or portable gaming systems,
as well as other 5VDC devices. You can use the various adaptors that come with the unit or the USB cable supplied with your device.

This device is also powerful enough to jumpstart a car! It is capable of inputting as much as 400A into a dead battery to help start your car. Just hook it up the terminals, wait about 5 minutes, then start the car. It’s as simple as that!

The very bright LED light has several functions: a simple flashlight, a strobe light, and a light that flashes SOS.
When I got this unit, I immediately plugged it in. In about 4 hours, all 5 blue power lights lit up in turn showing a full charge. When you turn on the POWER-ALL and connect up to 2 USB devices, it charges each one completely then automatically shuts off. I plugged in my i-Phone with the Mophie Juice Pack and the Plantronics BlueTooth headset
and in 2 hours, they were both fully charged.

The unit itself has built in self protection against:

The POWER-ALL comes with a 110V power supply, and an adapter for a power outlet in a car. I plan to stash it under the seat and leave it plugged in all the time, since my power outlets only works when the vehicle is running.
That should keep it fully charged and ready for action. 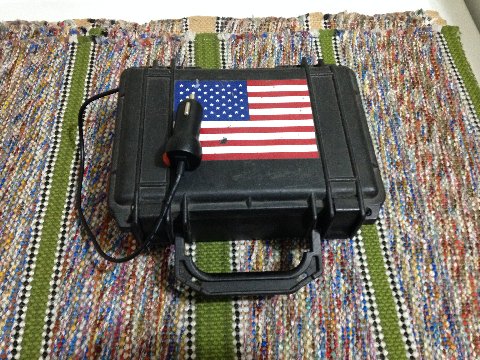 The only thing I don’t like about it is the carrying case…it’s kind of flimsy. It’s definitely not designed to be thrown around.
I got a nice indestructible pelican case for mine. The POWER-ALL Portable Power Bank is sold at Thinkgeek.com for 129 dollars and 99 cents. But, as always, there is a link in Allison’s show notes.

Thanks Bob! I definitely need/want one of these, so I did some searching and found it for $30 less on Amazon so only $100 and eligible for Prime shipping, so I’ve included my affiliate link in the shownotes. When I got it, it didn’t come with a case at all, so maybe that’s why it was $30 cheaper. From what Bob said though, that case wasn’t any good. It did come in a pretty sturdy cardboard box, good enough for me to keep the jumper cable parts in the trunk while the battery and 12 V (cigarette) adapter up in the glove box charging. The instructions gave us some more specs as well – the device is 12,000 mAh, and both USB ports are 2 amps, so with 5volts that means you can charge iPads with the POWER-ALL as well.

I talked to Honda Bob today about how I bought one too and he told me that he got a second chance to use it and again he successfully jump started a car with it. I’m super excited about this device, and I still can’t believe it can really jump start a car!