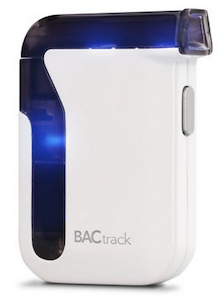 When Steve and I were at CES, we had some audio difficulties with a few of the interviews. In particular we were really disappointed to lose our interview with Stacey Sachs from BACtrack, makers of home breathalyzers. You know I’m a sucker for metrics, so this sounded like a fun product. When I explained to Stacey that we had lost the interview, she offered to send me one of their devices, and I jumped at the chance to do some real world testing.

BACtrack is named after the acronym BAC, which stands for Blood Alcohol Concentration. The unit I tested is called the BACtrack Mobile Breathalyzer. Before we start using the device, you might be wondering whether the results will be reliable. They said on their website that their products “Meets all standards of an FDA 501(k) approved alcohol screening device”.

I found the government site where you can look up products to see if they meet the 501(k) standards and I found several of the BACtrack devices listed there. I know most people wouldn’t have even checked, but I went a step further and read up on the testing of the device under the decision on whether the FDA would approve. You’d think reading FDA approval documents would be boring but I found some fun stuff. For example, they explained how the BACtrack breathalyzer actually works:

That’s pretty cool. The parent company for BACtrack was allowed to do their own consumer study and they were required to determine if people could figure out how to use it accurately and to compare the results to a professional breathalyzer test administered by a trained individual. The BACtrack tests were correlated to 97.2% against the professional breathalyzer, which is good enough for me. If you’re a data and analysis nerd like me you can go read the full results over at the link in the shownotes to accessdata.fda.gov.

I think one of the reasons I was so interested in the FDA approval is that this kind of approval will be necessary on many of the health and fitness devices that are coming out. I know Apple has been in discussion with the FDA about the Apple Watch, for example.

Now that I’ve either a) motivated you to care about the BACtrack breathalyzer, or b) bored you to tears, let’s take a look at the device. BACtrack makes several different models of breathalyzers, the model I am testing is called the BACtrack Mobile. This unit is about half the size of a deck of playing cards and comes in a nice little zippered pouch, suitable to carry in your purse or pocket. It syncs to the BACtrack mobile app on your iOS or Android smartphone via Bluetooth.

I’m a fan of Bluetooth…when it works. So often though, pairing things to Bluetooth is a real hassle. I’m happy to report that all you do is turn on the BACtrack and it pairs to your phone. No secret codes, no turning Bluetooth on and off again. Every time I’ve used it, it connected easily. Steve and I were even able to get both of our phones to see the device at the same time which was surprising.

The app shows the device on screen with an invitation to run a test. You tap the test button and the first thing it does is ask you to guess your Blood Alcohol Concentration. When Stacey was explaining their devices she explained that people really like to be able to guess. If you’re testing yourself, and you get good at predicting the results, then you’ll better understand how alcohol actually affects you since we all have different responses to alcohol.

After you’ve entered your guess, the BACtrack tells you to take a deep breath and shows a pinwheel thing to show you how long to breathe in. Then it tells you to blow into the device while a new wheel goes around. When it’s done (and you’re allowed to breathe again), it does some work and then shows you your Blood Alcohol Concentration level. It couldn’t be easier. After it tells you your Blood Alcohol Concentration, it shows you a graph to tell you when you’ll be sober, or a reading of 0. 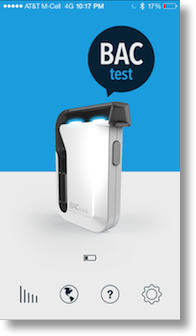 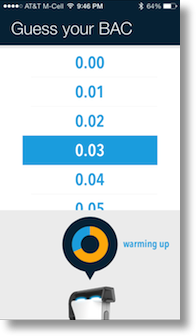 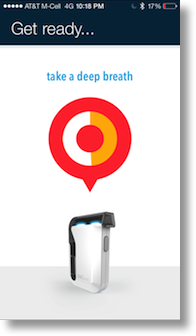 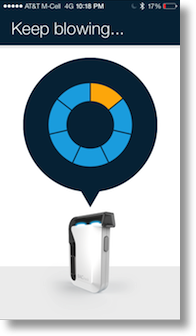 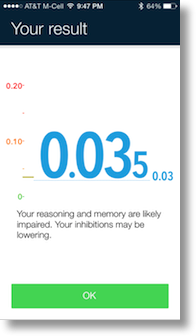 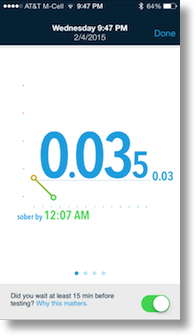 There’s one tricky bit to measuring your Blood Alcohol Concentration, and that’s that you have to wait 15 minutes after you drink anything to get an accurate reading. I had 6 oz of wine over the course of an hour and a half. I took the test without waiting 15 minutes, and while I guessed it might be 0.03, it came back showing 0.26, which is just shy of the level at which their documentation says you will lose consciousness! I waited 15 minutes and it came back with a reading of 0. In other words, pay attention to the instructions and wait the 15 minutes!

You know I’m a giver for the team and all, so you’d think I would have thrown back six drinks in 20 minutes just to give the BACtrack a run for the money but I found I was drinking less and more slowly because I was measuring it, and of course I had to wait 15 minutes to do the test which slowed me down too. You know they say that what you measure you will affect, which is why counting calories and steps works to get fit, so maybe by measuring your Blood Alcohol Concentration, you’ll find yourself drinking less. Not sure if that will be the result but you’ll definitely learn more about how quickly your own body absorbs alcohol.

The BACtrack comes with some interesting documentation, including information on how you should expect to feel at higher and higher Blood Alcohol Concentration measurements. They’re very careful in the documentation to tell you not to use this measurement to determine if it’s safe to drive. I’m sure legally they have to say that but I would think a real measurement of my Blood Alcohol Concentration is more reliable than my brain after a couple of drinks thinking, “I’m FINE!” isn’t it? I understand why they say that though.

Finally if you want even more metrics, you let the BACtrack create logs and make graphs over time of not just your own readings but also for friends (it comes with extra mouthpieces so you can share). The downside to keeping the logs is you have to create an online account, and the data is then stored on their servers. The BACtrack comes with a small brochure explaining their privacy policy and in my scanning I didn’t see anything alarming but it did give me pause to think of my alcohol intake being stored on someone’s servers.

The BACtrack Mobile is $99 (it used to be $129) and the app is free for your phone. Now I have to point out that BACtrack sells a line of lower-priced breathalyzers, called the Elite Series and they’re $50 and under. I did some research and the Elite Series doesn’t use fuel cell technology, it uses a semiconductor sensor instead. I’ll spare you the science, but the thing you need to know is that semiconductor sensor breathalyzers have some downsides. They are less accurate as they’re more sensitive to other substances, like cigarette smoke and perfume. They also need to be calibrated – BACtrack recommends every six months, which sounds kind of painful to me – not even sure where you go to get one calibrated.

If you want to save some money but stay with the fuel cell technology for higher accuracy and reliability they have the BACtrack Element that runs $80 and just shows you your level right on the device.

Remember, just like the only way to be sure you don’t get pregnant is to not have sex, the only way to be sure you’re sober is to have nothing to drink. With that caveat, I think the BACtrack Mobile is a terrific device and will give me metrics to make sure I know precisely whether my driving might be impaired, endangering my life and the lives of others. I included a link to the comparison chart of all the different models over at bactrack.com so you can figure out which one is right for you.

6 thoughts on “Breathalyzer Testing With the BACtrack Mobile”