Two interviews from CES: Adonit styluses have come a long way from their simple beginnings, and 360Heros holders for multiple GoPro cameras for surround video. Allister reviews Evernote’s Scannable iOS app which can make short work of “scanning” documents with an iDevice camera. Steve Davidson reviews the Blue Ant Ribbon to “Bluetooth-ify” your favourite earbuds. In Chit Chat Across the Pond, Elaine Giles and Mike Thomas of the MacBites podcast talk about their world of IT training.

Hi this is Allister Jenks standing in for Allison Sheridan on the NosillaCast Mac Podcast, hosted at Podfeet.com, a technology geek podcast with an EVER so slight Macintosh bias. Today is Sunday March 22nd, 2015 and this is show number 515.

On this week’s show we have two more CES interviews from Allison, I review Evernote’s new iPhone app Scannable, Steve Davidson reviews the Blue Ant Ribbon, and then on CCATP I talk to Elaine Giles and Mike Thomas from the MacBites podcast about the world of IT training.

So, let’s start the show with two more CES interviews.

Adonit Styluses for Tablets Have Come a Long Way 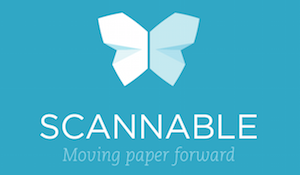 Over the years I’ve used several different apps on my iPhone for capturing printed material using the device’s camera. Most get the job done but with varying quality results and sometimes at the expense of ease of use. As a result I’ve sometimes just reverted to taking a simple photo and making do with some careful alignment by hand. Then along came a new app called Scannable, from the folks at Evernote. It is without a doubt the best app I have used.

It doesn’t get any easier than this because as soon as you launch the app it fires up the camera and will automatically recognise documents in its field of view. There are no buttons to push, even for multiple pages, until you’re ready to send it somewhere. About half the time I am stilll aligning the document to where I think it needs to be when it finds and captures the page.

To give you an idea of just how fast it is I did a timed experiment. I quit the app, laid my phone on my desk, locked and in sleep mode, and placed a single page, two sided document on a pile of papers on my desk. The total time – without rushing – from that state until I had both sides of that document captured in a single PDF ready for exporting or sharing on the phone, was 27 seconds.

It only takes another few seconds to be in the mail composer view or be saving to Evernote or a few seconds more if you want to export to another app directly on the iPhone. As soon as it’s sent wherever it’s going you can either go right back and do something else with the same document or start anew. Either task is one big button to push and you’re back in business.

Oh, and I checked the resulting note in Evernote on my Mac and there’s a 1.5mm high line of text that is perfectly readable.

Check out Scannable, from Evernote in the iOS app store. It’s free.

Next up we have a review from Steve Davidson. 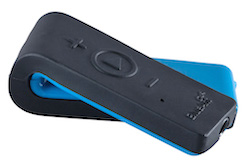 I’m going to begin this review by giving you the punch-line: I really like this thing. In fact, I’m thinking of buying another one for myself, and one for each member of my family. Yeah, I recommend it.

I think I’m getting ahead of myself, so let’s start with the problem it solves. I have accumulated a reasonable collection of in-ear monitors, like earbuds and earpods, each of which has its own set of characteristics and optimal uses. For example, I have a set that does a really good job of negating ambient noise, another set that is really comfortable for long term use, a set that have hooks to keep the tiny speakers in-place and only loosely connect with my ear — which is perfect for walking the dog, when I don’t want to be totally isolated from my environment — there’s a pair that has really good base response, and so on. They are all quite different, but they all have one thing in common: The connect to my iDevices with a cord. The cord is a problem when I’m on my elliptical machine, or when I’m multitasking household chores and watching a movie on my iPad (which tethers me to a fixed location or by reducing my available hands while I carry the iPad around with me). Obviously, Bluetooth is the solution, but I’m loathe to give up my suite of ear-things and buy a bulky (and expensive) one-trick-pony Bluetooth earphone.

The solution to this problem is the Blue Ant Ribbon. Blue Ant is the name of the manufacturer, and the device is called the Ribbon. The name is based on its shape: Imagine a really thick stick of chewing gum folded over in the shape of the letter “V” (more or less). At the butt end of one side is a standard 3.5mm headphone jack. The device is a Bluetooth transceiver, so with the Ribbon, you can effectively “Bluetooth-ify” any audio listening device.

And it goes even beyond listening. It has a built-in microphone that can be used to take or make phone calls (or other microphone functions like talk to Siri, use Skype or FaceTime, etc.).

The Ribbon is very well thought out. The inside of the “V” has a set of ridges that holds it fast to the edge of clothing, so you can have it straddle a collar and it stays in place. With it clipped near the collar, I can coil up my earbud cord, thereby eliminating having that cord flopping around as I move or having it getting caught on things. It can be paired with multiple devices (but you can use only use one at a time), so I use it with my iPod when walking the dog or my iPad when I’m on my elliptical machine.

On the front surface are volume up and down buttons that are placed on either side of a play-pause button. The buttons are ridged to make them easy to identify with your fingertips. The play-pause button works for both audio and video content, and can be used to answer or hang-up a phone call. And a double-click summons Siri. Press-and-hold this button to power on or off the device (and it has voice prompts to tell you what’s going on). There’s an LED on the front that also indicates status (charging or paired, for example).

Charging is easy, using a standard micro-USB cord. And I really like the battery level icon that it puts next to the Bluetooth icon on my iDevices — so at a glance, I can see how much charge the Ribbon has left. This makes battery management very easy. Charging takes around an hour or two, and the device lasts forever between charges; the spec says 250 hrs standby and 6 hours play time.

If I have any critisism of the Ribbon at all, it would be that the built-in microphone is not as good as the microphone in any of my Motorola Bluetooth earpieces, probably because it isn’t noise-cancelling.

And the price is right (usually): A few days ago I saw it on Amazon for under $25, as I write this, it’s much higher — the price seems to fluctuate. Here’s a link through Allison’s Amazon Affiliate program (so she’ll get the credit)

So, to sum it all up: The Blue Ant Ribbon is a very capable device that effectively Bluetooth-ifies any listening device — and it has the Steve Davidson seal of approval.

Thanks for that excellent review, Steve. As someone who listens to podcasts or music every day on my walk to and from the office, this is an intriguing option which I will certainly be investigating further.

Now you know Allison trusts us guest hosts with doing all the hard work of creating the shows while she’s away, but I’m sure you also know she can’t help but pop her head in with an important message!

Hi everyone! I bet you’re having a blast listening to Allister right now. Sorry to interrupt so I’ll be brief. Remember the episode where I had Shelly Brisbin on to teach me to use some accessibility features on iOS? I explained that it was a tricky episode to record because we wanted to be able to hear high quality audio from our iOS devices. I figured out how to do it with a combination of a new feature in Yosemite’s QuickTime and using the new Audio Hijack 3.

It occurred to me that other people might have a need to play audio from iOS, not just for accessibility reasons so I decided to create a tutorial for it. I whipped open my trusty Clarify and quickly snapped screenshots of each app window and I how I had things set up. For QuickTime I had to use Clarify’s timed screenshot capability to capture a pulldown window. After I had all the screenshots taken, then I went back and started annotating them. I dropped in arrows and sequence numbers, and then in the text field I was abled to use the numbered list function to explain each of the steps.

One of the last things I do is to start at the beginning and explain what problem the tutorial solves. I also like to articulate the basic idea of the steps I’m going to show the reader. I think it’s much easier to write the introduction after I’m done because I often find improvements along the way as I’m creating the tutorial.

Anyway, using the built-in connection to my WordPress account on my web server, I pushed the publish button and created a page at podfeet.com under Mac and Recording tutorials called How to Record Skype Call Including Audio from iOS.

If you know stuff and other people could benefit from your knowledge, you might find Clarify a fun way to teach. Check it out out over at clarify-it.com.

Elaine Giles and Mike Thomas discuss with me the nature of the IT training they deliver for individuals and businesses, online and in person.

I had such a great time chatting with Elaine and Mike. If you want to hear more from them, be sure to check out the MacBites podcast where Elaine, Mike, and MacBites Siri bring you tips and tricks and valuable first hand experiences of the Mac platform, iPhone, iPad, iPod and AppleTV … and anything else Apple may tempt them with. Trust me when I say you haven’t heard it all until you’ve heard one of Elaine’s tales of Apple repair despair! I was assured during our chat after recording that a new episode is imminent.

Well, that’s going to wind things up for this week – normal service should be resumed next Monday. Allison has asked me to tell you the next live show will be on Monday, March 30th, not Sunday at the usual 5pm Pacific Time.

So don’t forget to send in your Dumb Questions, comments and suggestions by emailing Allison at [email protected] and check out the NosillaCast Google Plus Community too – which you can find at podfeet.com/googleplus – for lots of great content between shows! If you want to join in the fun of the live show head on over to podfeet.com/live next Monday night – that’s Monday about a week from now – at 5pm Pacific Time and join the friendly and enthusiastic NosillaCastaways. Thanks for listening, and stay subscribed.