While on our great India/UAE/Nepal vacation, we were having to convert money from different countries as often as we were changing time zones. Don McAllister was using an iOS app called Vert from calumaa.com/vert that I really liked. Now a money conversion app doesn’t sound a bit interesting but this one is so much more.

Vert (short for convert) is designed to convert measures for acceleration, angle, area, cooking, currency, data size, data transfer speed, density, energy, force, frequency, fuel consumption, illuminance, metric prefixes, power, pressure, radioactivity, speed, temperature, time, torque, typography, viscosity, volume, volumetric flow and weight. But wait, there’s more! It even does clothing conversions including bra cup and band, hats and caps, shirts and blouses, shoes, and suits and dresses. All alone at the end of what it can do is a category called “other” and in there is one solitary conversion: rock climbing. Whew! I defy you to find something you need to convert that’s not in that list! 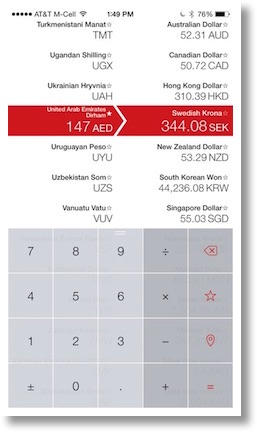 Let’s dive into one of these categories so I can walk you through the user interface on Vert. We’ll use Length since that one is pretty easy. Vert has two columns of units, with the conversion happening from left to right. In the middle of the screen, two units are highlighted in a very pleasing red with white text. You simply scroll with your finger to set the left and right columns to the conversion you desire. For example, I can scroll the left column to where it says 0 yd, and the right column to 0 m. Below the columns there’s a numeric keypad where you can type in the number you need to convert. As I type in 10 for example, the left side change to show 10 yd and the meter side changes to 9.14 m. Ok, easy enough. What if you want to convert in the other direction? You don’t have to scroll both sides to flip them, there’s a chevron pointing from left to right, so a simple tap flips it the other way so now it shows 10m is 10.94 yd.

Just within length there are 35 units between which you can convert! Seriously, we’ve go hectares in here, parsecs, light-minutes, fathoms, nautical miles, chains (whatever those are) and Hands for measuring horses! It’s crazy. But here’s where the elegance of this app comes in. You’d lose your mind if every time you wanted to convert from chains to parsecs you had to scroll through 35 units. Once you find the ones you need to use often, you tap on the tiny little star to the right of it. Then down next to the keypad you can tap on the big star and the list is instantly filtered down to just the ones you need. Want them all back? deselect the star and you’re back in a sea of measurements.

The keypad lets you do math along the way too. Here’s an example. We wanted to tip the same on our trip for the driver and the assistant. It was suggested that we tip 300 Indian rupees for the assistant and 500 Indian rupees for the driver, times the number of people times the number of days. But we only had US dollars (which they would actually accept). 100 Indian rupees is 1.6 US dollars (Vert downloads the latest currency conversion when you’ve got an Internet connection). With Vert I can type in 300 for the Indian rupees, which is converted to 4.8USD, but then I can type x 2 people x 3 days = and the USD side updates to $28.78. VERY handy. If you don’t need the calculator/star section, you can simply swipe down to get it out of the way, swipe up to bring it back.

Switching between measurements is as easy as a sweep in from the left. Swipe from the left again and you have access to a long list of settings. You can modify the theme if you don’t like the red/white color scheme, but I think it’s very pleasing. I won’t go through all of the options but a few settings are interesting. You can choose to have the units within a category sorted either alphabetically OR intuitively. I looked at several categories intuitively and I couldn’t tell what they meant by that, but then again I was jet lagged so not at my alertest! In the settings area you’ll also find a short, 6 screen tutorial to walk you through how to use the app. I found that super useful.

You can also turn on “uncommon units”. On the Vert website they say that’s included “because it’s fun and you will share it with others!” They’re right. Did you know that there are 50M Bulgarian shot glasses of volume in an olympic-sized swimming pool? There’s a free version of Vert called Vert Lite, but it doesn’t include all of the categories of measurement. It would be a good way to find out if you like the elegant interface as much as I do, but if you want all of the conversions you’ll need to shell out the full $3 for the pro version. If you appreciate an elegant interface, I think it’s well worth the money, plus it’s a universal app for iPad too. Check it out at the link in the shownotes in iTunes or on their website at calumaa.com/vert.