When Steve and I normally travel, we meet interesting people everywhere we go. There’s little opportunity for that when you travel in a large group because you’ve got no motivation. One night Steve and I got to the hotel bar in Jaipur ahead of our group and a man hollered out, “We saw you in Ranthambore!” It turned out he and his partner had been in the same hotel when we went on our first jeep safari to see tigers. We walked over to them and then one of them noticed Steve was wearing an Apple shirt and with BREATHLESS excitement asked if he worked for Apple? That was enough to bond the four of us for life.

I wish I could remember their names because they were delightful. One of them showed me an awesome app for iOS called Touchnote. Here’s the problem to be solved. When you’re on travel, it’s fun to send postcards home, but it’s a GIANT pain to A) find postcards, B) find the right denomination stamp and C) find a postal box. Our buddy Ron ALWAYS sends us a postcard on travel, I have no idea how he pulls it off. Enter the free Touchnote app for iOS from touchnote.com/. You buy credits in the app, I bought 6 credits for $10 I think, which was the smallest denomination. I was able to send postcards to the US for the equivalent of $1.33 each which is actually pretty inexpensive.

I know Touchnote isn’t the first company to do this but they do it beautifully. You give Touchnote access to your photo library, then pick a layout for the card. You can add a caption to the photo side, and then you write your brilliant and witty text on the other side. The good news is that you can send multiple copies of the same postcard to different people, so I wasn’t forced to be creative multiple times. The bad news is that the app does not ask for access to your address book so you have to type in the addresses by hand. I wish it would just use the address book but I suffered through. 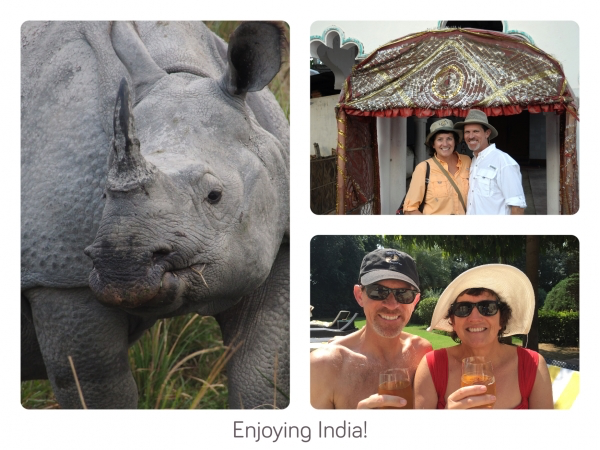 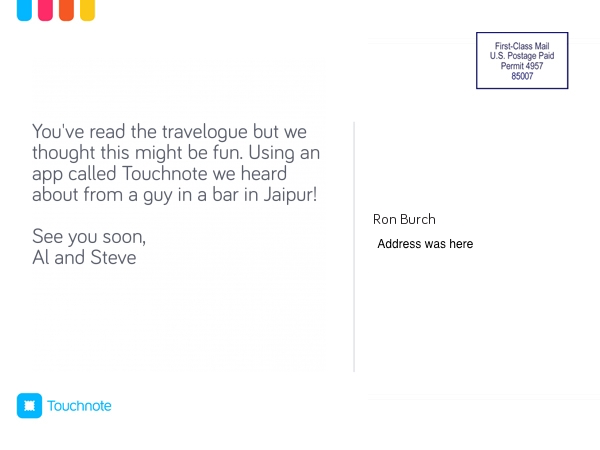 I didn’t send a copy to myself but my friend Diane told me that the finished product had arrived, that the card stock was shiny and thick, the images were crisp and beautiful, and that the text was clear and readable. It arrived in 4 days which is inside of what they promised at Touchnote. The cool thing is that the postcard did not have to travel all the way from Nepal to the US. I think they’re a British company but they must have had it printed and mailed from the US to get there that fast. Diane confirmed that the postmark was from Arizona which isn’t QUITE as cool as if it had said Nepal but she probably got it two weeks earlier! I give Touchnote a big thumbs up and will keep using it for sure!

6 thoughts on “Touchnote for Postcards”