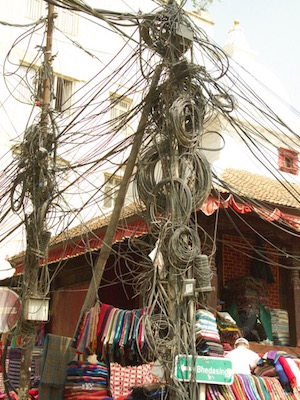 When we finally did get on real Internet at our hotel in Calcutta, that was interesting too. We tried on our iOS devices, but the screen wouldn’t render properly for us to log in. They had to send the “IT Guy” to help us. He typed in a lengthy url with some .jsp stuff and the end and we were in. Getting real Internet after a week of 14KB/sec on the ship when we were lucky was like drinking from a cool, clean fountain after a hike through the desert. We were SO excited when we met at the hotel bar and had Internet. I distinctly remember Jacques looking at me with glee in his eye saying, “I updated an APP!!!” and giving me a white man’s high five. It was sad for the two of us who weren’t into geek stuff but it was pure joy for us normal people. I should mention that when we did get Internet, I had 38 app updates waiting on my phone, plus iOS 8.2! I decided to wait for the iOS update just to be safe. Normally I have automatic app updates running so it was interesting to see how many really come in when you’re not paying attention. I never did let my Mac run software updates because half-good Internet made it nuts. It kept asking for my password but then rejecting it as too slow, so I finally gave up.

I have never been in so many places where the power goes out frequently. Just about every hotel we went to had at least one short term power outage while we were there. It happened at the tea plantation. It even happened in the Dehli airport! It always resumed in a minute or two so it wasn’t a huge problem but it was endemic to Nepal and India. I can’t remember it happening in the UAE, but that’s a very wealthy country with all brand new infrastructure.

Speaking of infrastructure, the wiring in India and Nepal was absolutely NUTS. I put an image in the shownotes of a typical street corner in India showing you what their wiring looked like. It was HUNDREDS of wires just jumbled all up in a ball and dragging across multiple buildings. Every time I looked at it, I would say “ever heard of cross talk???” to which Rally would respond, “ever heard of TALK?” He guessed that everyone who wanted a phone line or power or TV just strung a new line each time.

Probably the most humorous tech problem happened in Ranthambore which is where we went on the game safari and saw a tiger. The hotel was idyllic, set in a jungle with bungalows spread around a beautiful garden. They explained that there was Internet in the lobby and a bit of Internet out on the veranda but that it didn’t reach to the rooms. Of course that meant we all kept huddling in the lobby to sip some Internet. It was pretty poor. One day Steve and I were sitting there and the power went out. When it came back up, we had no Internet at all, so Steve asked the front desk if perhaps they could reboot the wireless router. The guy smiled and said of course and then walked into the lobby and reached down to the router, BEHIND THE METAL FIREPLACE SCREEN! If you don’t catch what that’s so funny, it turns out that the absolute BEST way to block electro-magnetic signals is to erect a mesh of a conductive material around the transmitter. I believe it was Faraday who first discovered this phenomena, so it’s often referred to as a Faraday Cage. We tried to explain to them that they might have a wee bit more success with Internet service if they put the wireless router on the mantle instead. They smiled and agreed but I’d bet dollars to doughnuts that the next shift put it right back where it belonged! 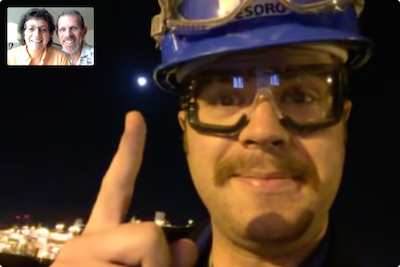 One thing that helped us not miss the family too much in almost a full month of travel was using FaceTime where we had good Internet. We were in Dubai when Steve’s dad’s 80th birthday occurred, so we pre-arranged a time with Steve’s mom to make sure she had her iPad ready. It was so awesome to be able to see and talk to him literally on the other side of the world! Later Lindsay or Kyle, I forget which, told us that when they called him he said, “Steve and Allison Facebooked me!” Oh well, he got close! We did post a screenshot of us and him on Facebook so maybe he’s right. We also FaceTime’d with Kyle which was a bit easier because he was working nights so daylight for us was when he was awake. He’s really goofy, I think you’ll like the screenshot I put in the shownotes. He was showing us the moon. Lindsay had the advantage though – she’s watching Tesla for us so we got to see her on FaceTime. I have to admit though that the dog did not seem to be a bit interested in the whole FaceTime experience!

I’ve talked about TimeScroller often over the years, and it was really invaluable during this trip. When we first arrived in Dubai, TimeScroller told us that we were 12 hours ahead of our home in Los Angeles. But while we were there, the US went onto (or is it off of?) Daylight Saving Time, so then we were 13 hours ahead of home. Ok, that’s fine. But then we went to India. India decided something brilliant a while ago, they decided to all be on the same time zone. The problem was that the country didn’t sit geographically where you’d expect one whole hour to be, so they had to move by a half hour. So now we’re 13.5 hours ahead of home. That was pretty good for time in India but the crazy Nepalese were off by another 15 minutes, so we were off by 13 hours and 45 minutes! If you’ve been listening to the show for any length of time at all, you know that real math like Calculus came easily to me but I have a lot of trouble with arithmetic. Just picture that it’s 8:13 in the evening and I’ve got to add 13 hours and 45 minutes to that? Not happening. TimeScroller for the win.

I have a pretty good sense about what time it is in Europe because I chat with Bart so often, but it was a mystery to me on the trip and TimeScroller saved me again. New Zealand is a real challenge since they’re A) living in the future by nearly a day, and B) are south of the equator so when we go into summer they go into winter, which means they move into DST when we’re moving out. That means they actually get farther away in time from us. Throw that 45 minute offset into the mix and I had no chance of knowing what time it was when I wanted to chat with Allister or Devon and Maryanne. TimeScroller on iOS and on the Mac as a widget was my constant tool of choice.

When the big Apple announcement occurred at 10am in California time, we had just gotten to Delhi India, so that meant the show was on at 10:30pm our time. Don, Wally and I sat up in our room with the two MacBooks and Don’s iPad to watch the news. It was a real slog staying up that late after a long day traveling from Dubai, but we knew that we just had to do it. It was good we had three devices working on it because even though we had acceptable Internet, it was just like at home where one device would lose the show so we’d flip to the next one. It’s a fun memory of the trip with the four of us huddled around a 9.7″ iPad in the end.

One fun bit – as we’re watching across the globe, Bart tipped me off that he and Steven Goetz and Switcher Mark were in the NosillaCast chatroom while watching so we were actually able to chat while we watched the show. It was surreal to be doing something so normal but in such an extraordinary place. Oh here’s another fun tidbit – when we first arrived, I got an email from NosillaCast listener Navin Khilnani welcoming us to Delhi! I just wish I’d known sooner that we’d be in his home town so we could have had a meetup but it was too late to set something up. I did want to give Navin a shoutout though!

Steve and I chose to use our American Express card to pay for things on the trip because they don’t charge you to use it internationally. Both MasterCard and Visa charge I think 1% as a foreign transaction fee, but not AMEX. On the trip Steve discovered another huge advantage of AMEX, and it’s that they send an email to him INSTANTLY every time we used it. Instantly if we had Internet of course! Seriously, we’d order a gin and tonic in the hotel bar and before we were half done drinking it the email would come through.

That’s going to round out my travel documentary about how tech was impacted on such a crazy journey. I guess I should mention that we also saw goats, monkeys, donkeys, water buffalo, cows, dogs, goats, camels, camels carrying baby goats, peacocks, warthogs, geese, rhinos, elephants and two tigers!