Live show is on Tuesday next week at Noon Pacific Time so Europe can come to the show. I got to host the Daily Tech News Show in Tom Merritt’s absence. Chris from Michigan tells us about Rise – the Sunrise Sunset Calendar for iOS. Steve Reviews the Feiyu G4 3-Axis Steady Gimbal for GoPro to steady your videos. In an attempt to prove that I can talk about anything I want on the show, I’ll tell you about our cool new hot water recirculation pump and how I used a Craftsman Infrared Thermometer to measure the water temperature. In Chit Chat Across the Pond I’m joined by Patrick Beja from FrenchSpin.com to talk WWDC.

Hi this is Allison Sheridan of the NosillaCast Mac Podcast, hosted at Podfeet.com, a technology geek podcast with an EVER so slight Macintosh bias. Today is Sunday June 14, 2015 and this is show number 527. Before I forget, next week’s show will be delayed by a couple of days because I’ll be at the Midwest Mac BBQ and MacStock for the weekend. For the live show listeners, I’m going to do it at NOON Pacific Time on Tuesday 23 June. Now I realize that messes up New Zealand and Australia, but Tracey Baucells asked me if maybe once in a while I could have the live show when Europe is still awake. Since I was moving the show from it’s normal day anyway I figured this would be a great day to do it. So if you’ve never been to the live show before because it’s in the middle of the night for you, I’m pretty sure this makes it 8pm for England/Ireland area, and then 9pm for Germany and others in that timezone. You can find all of the instructions on how to participate over at podfeet.com/live. You can even watch the clock on that page to make sure you’ve done the math right – it shows the time at MY house so if it’s coming up on 12pm then you know you did it right.

By the way, if you use the new NosillaCast app you’ll get notifications from it telling you when the next live show is. Alternatively over on podfeet.com/live there’s a calendar link you can copy and then paste into your calendar tool of choice. I keep that up to date whenever I’m changing up the show time. I hope to see more new people there and some of the classically trained NosillaCastaways as well.

I’m super excited about the show this week for a bunch of reasons. I’ve got a review from Chris from Michigan (who we get to meet in Chicago at the Midwest Mac BBQ and Macstock!) then a review by Steve about this really cool GoPro Gimbal, then I’m going to tell you about my hot water recirculation pump (which is actually really cool) and then on Chit Chat Across the Pond I got to talk to Patrick Beja from French Spin and Daily Tech News Show. He was dying to talk about WWDC, and we had a BLAST. He was fantastic and I know you’ll enjoy it.

This week Tom Merritt was away on special assignment so he left his show in the capable hands of his 3 co-hosts and his 2 producers, but that still left him with one day where he needed a host, and in a moment of madness, he picked me! I was thrilled to get to do it but when the time came I was actually kind of terrified. It’s different when it’s someone else’s baby, you know? You drive your own car or ride your own bike but when it’s someone else’s it’s a lot of responsibility. The show aired on Tuesday and my guest was Todd Whitehead of Alpha Geek Radio fame. I posted the video over at podfeet.com so you can watch, or you can subscribe at dailytechnewsshow.com.

Saving Water in California with a Hot Water Recirculation Pump

Chris from Michigan is here to tell us about a sunrise/sunset calendar called Rise. Don’t be confused by the name, this is not the Sunrise calendar app that Microsoft just bought, it’s a horse of a completely different color!

Rise – the Sunrise Sunset Calendar from Chris in Michigan

Hey Allison and fellow Castaways. Chris from Michigan here, and I’ve got an iPhone app that does just one thing and does it well. It is called “Rise – The Sunrise Sunset Calendar” by Sunrise Sunset Calendar, LLC. Here’s the problem to be solved: I’m planning a trip to California and I will need to catch a bus at Powell and Market in San Francisco at 7:00 AM to connect to an Amtrak train in Oakland. I’m staying at an AirBnB 1 and 1/2 miles away and I’m planning to walk to the bus stop. But will I be walking in the dark or will natural light be guiding my way? 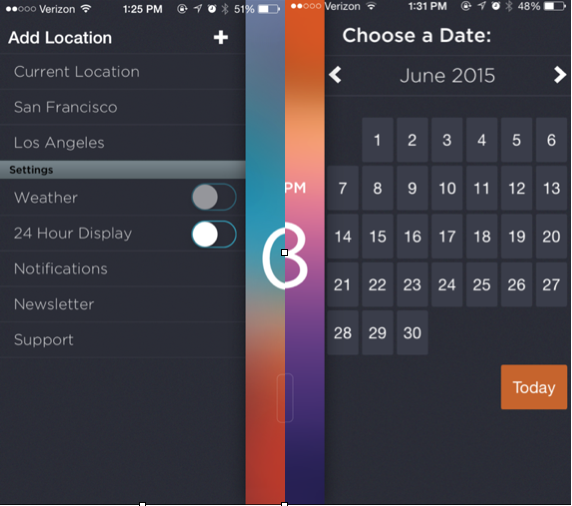 Swipe up and down for for the sunrise and sunset times as well as the first light and last light times: 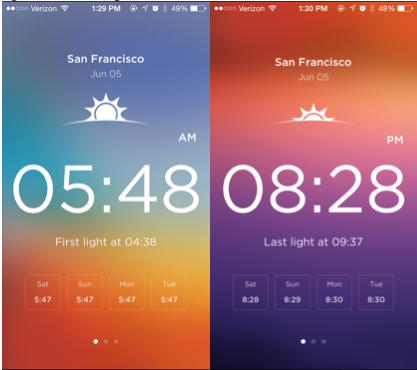 There are a couple of in-app purchases, one for notifications ($1.99) and one for weather & notifications ($2.99) but I have several weather apps and I don’t need to be notified when the sun comes up, so the in-app purchases are not that vital. “Rise – The Sunrise Sunset Calendar” is optimized for the iPhone but still looks pretty good on an iPad, and is available in the App Store. That’s it for now. I use the Twitter handle CalMiKy and I will Stay Subscribed.

That sounds really cool, Chris! I’m thrilled to know you’ll be at Macstock and the Midwest Mac BBQ too! One of the common misconceptions about California is that it’s hot here. It isn’t hot, it just isn’t cold. There ARE hot parts, inland Orange county and the Pomona area east of Los Angeles, and of course the desert itself gets really hot but if you’re by the ocean it’s quite mild. The real surprise to those of us from Michigan is how cool it gets at night. I remember as a young nerdlet of 7 years old in Michigan running around at 8 at night during the summer in shorts and a t-shirt and being quite warm, but out here you pretty much have to drag a sweater along for the evenings. It’s pretty much 70 during the day and 55 at night…all year long!

Patrick Beja joins us to talk about the World Wide Developers Conference. You can find Patrick on Twitter @notpatrick. He hosts several podcasts at frenchspin.com including two English-language shows called Pixels which is gaming, and the Phileas Club where he gets people from different countries together to discuss the week’s news. He says it’s culturally very interesting and he promises it’s a great time as well.

That’s going to wind this up for this week, many thanks to our sponsor for helping to pay the bills, the makers of Clarify over at clarify-it.com. Don’t forget to send in your Dumb Questions, comments and suggestions by emailing me at allison@podfeet.com, follow me on twitter @podfeet. Check out the NosillaCast Google Plus Community too – lots of fun over there! If you want to join in the fun of the live show, head on over to podfeet.com/live on TUESDAY at Noon Pacific Time and join the friendly and enthusiastic NosillaCastaways. Thanks for listening, and stay subscribed.