I’m sure you’ve heard me mention a few hundred times that we have a fabulous Google Plus community at podfeet.com/googleplus and an equally interesting Facebook group at podfeet.com/facebook. We have both so you get to choose where you want to play.

There’s so many reasons to love these communities, not the least of which for me is that you guys can go in there and solve each others’ problems. I love to help people but having more people answering questions is always better. The other thing that’s great is that sometimes someone asks a question (dumb or otherwise) and we discover that lots of us had the same question.

Let me give you a great example from this week. Allister Jenks posted this question:

Any suggestions for a very simple notepad for macOS which launches quickly with an open window/document? I want somewhere I can quickly paste some text for reference, but rarely want to keep it.

TextEdit keeps asking me to create new documents and the default view is too small. Ideally I should be able to set a monospaced font and choose foreground and background colours and size, and it should remember those. Any more than that is overkill.

Immediately a whole bunch of people jumped in with “I have the same question!” I was amongst the people who piled on with the same question. It irritates the daylights out of me that TextEdit doesn’t open with a blank page, AND I hate the spelling because it means Spotlight is always confused on the first 5 letters whether I want TextEdit or TextExpander.

Knightwise suggested the text editor Atom which Bart and I have talked a lot about on the show for programming. I’m not sure that one fits the requirement because it has a tendency to open with the last thing you were working on. A handy feature for sure, but we’re looking for something we can launch and hit post, and not save.

Kenneth Taylor jumped in with the suggestion of nvALT from Brett Terpstra. I haven’t used nvALT in ages, so I fired it back up. nvALT is a spinoff of Notational Velocity. It’s a really sweet tool that lets you save notes that sync flawlessly (and always have) between devices. One of its most powerful features is search – which is oddly where you also type the title of new notes. Brett has really been bringing it into the fold for Markdown fanatics so that’s cool. However, it doesn’t meet this very niche need that so many of us have – just open up in a blank screen so I can paste AND be able to see what I pasted in a format of my choosing. Glad Kenneth reminded us about nvALT though, it’s back in the rotation of my useful apps.

George from Tulsa suggested an app called Tex-Edit from Trans-Tex Software. He explained that it’s highly scriptable with an interface to Automator. It looks like it hasn’t been updated in a while though with the last release talking about Yosemite. Worth a look if you’ve got $15 and you’re looking for a scriptable text editor.

Rob Rait suggested a very simple $0.99 Mac App Store app called Notepad. This looks so beautifully simple I thought it was going to meet all of Allister’s requirements. While you can change the font to what you want, it sadly doesn’t remember that choice for new documents. Allister is terribly clever and figured out how to launch a saved document from within Alfred that has his settings but I’m not sure I want to go that far for this task.

Trevor Drover won this small but evidently important challenge (at least in my opinion). He suggested CotEditor which is available for free in the Mac App Store. On first launch, it opened in a blank window. YAY! Our first criteria is met. 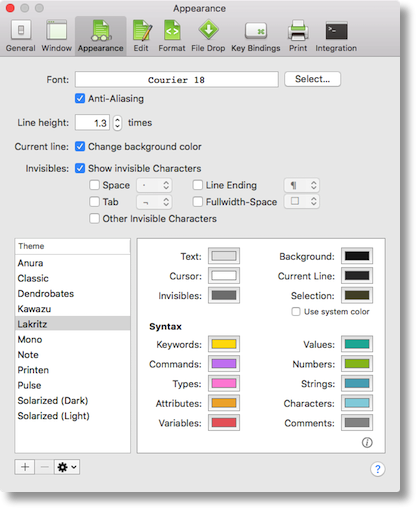 Next up is being able to control the font and background colors. A quick trip to CotEdit Preferences shows a plethora of settings that are actually easy to follow. In my experience, like with Atom, the preferences are arcane and not very clear, but CotEditor is laid our really well. For example, under Appearance, you can set the default font, size and color, the line height and whether to highlight the current line. You can choose from a variety of built in themes, change the default colors of those themes, and even create your own themes.

Before I go on with what else I like about CotEditor, note that all of Allister’s original requirements have been soundly met.

In Atom, I finally had to call Bart to find out how the heck to get it to recognize that I was writing JavaScript and so to do the correct syntax highlighting for me. Instead of in Preferences, or in one of the menus, it was down in the bottom right of the window, which is well known as the graveyard of visual clues! In CotEditor there’s a super obvious pulldown in the top of every window that says Syntax Style. Even better, under the Format tab in preferences, I found a Default Syntax Style section where I could change it to JavaScript. Yippee!

By the way, if you DON’T want CotEditor to open a new document on launch, you can disable that in Preferences. You can choose auto save with versioning which I know a lot of you like (although I think it makes us weak). Here’s another cool option in Prefs. Let’s say I get all excited about using CotEditor and I have a document open. Then let’s say tomorrow I edit that same document in Atom and save. By default CotEditor will automatically update the already open document to the modified version!!! I tested it and it works. Really crazy, never seen that in any app before.

You’ve got options for word and character count, you can set default window sizes, and transparency of the window (which I find annoying at best).

In learning JavaScript one of the things I really liked about Atom was that it would autocomplete standard syntax terms. That was terrific. And then over time I realized that if I did a typo, like once I wrote Nan (lower case second n) instead of NaN for Not a Number, and Atom remembered it and kept offering it to me! In CotEditor I can tell it to give me a completion list that includes words defined in my chosen syntax style but NOT to include words just because they’re in the document. That’s going to help me out a lot. CotEditor lets you choose to invoke the word suggestions manually with Escape or you can have it suggest completions while typing.

In this week’s Programming By Stealth episode, Bart explained that whenever he creates a new function he has a standardized set of comments so that he’s forced up front to describe to his future self the purpose, returns and arguments. I created a TextExpander snippet for it and plan to use it, but CotEditor has a built in snippet tool that might be even better. You define a snippet of text, and then a keystroke to invoke it. Works like a charm and might be better than gumming up your TextExpander snippet library. Not transportable to other editors though so use with caution.

In Atom, I REALLY like that when I type a ( or { it adds the second one so I can’t possibly forget to close off my stuff. Not that I don’t still close it incorrectly, but it’s nice to have at least one safety net. That feature seemed to be missing in CotEditor but I found a place to turn it on in the Edit preferences. Another thing I like in Atom is that when you put your cursor to the left of a bracket of any kind, it highlights the matching one. In CotEditor it seems to do it sometimes but I haven’t yet found the pattern of when it’s showing it to me. I’m sure I’ll get it sorted but if someone else (Trevor?) has cracked the code on that (all puns intended) I’d really appreciate some guidance.

The only thing I could find not to like in CotEditor is that to open a new document it’s f5 instead of ⌘O. I don’t know why some tools use f5, drives me crazy. In Preferences for CotEditor there’s a section called Key Bindings, and I can see File Open… and I can tell it to use ⌘O, but hitting the keystroke doesn’t do anything. When I quit and reopen CotEditor, the change I made to the keybinding has disappeared. According to the Help file, you can’t reuse a key binding but I searched all the menus and didn’t see one that was ⌘O so I’m not sure what’s going wrong for me. I GUESS I can live with this.

Anyway, the subject of this story was the wisdom of crowds. Through our fantastic audience, we got a lot of great suggestions to a problem many of us had. If you’re not yet a member of one of the two groups, I can highly suggest joining either the Facebook group or the Google Plus community to find the help you need. Many thanks to all the people who are already in the groups, already contributing questions AND answers. Let’s keep it up!