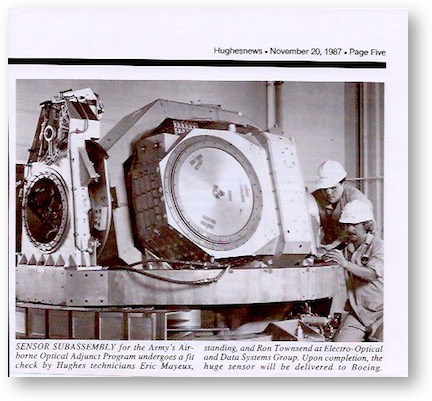 I don’t often take long strolls down memory lane, but there’s one tale of technology that I would like to share. It’s a story about how hard computer animation used to be.

From 1978 till 1989 I worked as a mechanical engineer for a defense contractor, then called Hughes Aircraft Company. I worked in an organization responsible for the design of gimbaled systems for optical telescopes and radar sensors. A gimbal is a mechanism designed to allow the sensor in question to be rotated both horizontally and vertically (or as we say in the business, in azimuth and elevation) to point the sensor in a certain direction.  When I started at the company, we did all of the design on drafting boards with pencils and paper. Kids, go ask your parents (or grandparents) what a drafting board is.

I was a good design engineer, but I wasn’t a great design engineer. Around 1982, they brought in the very first computer aided design system (aka CAD) from a company called SDRC, which at the time was just 2D drafting done on a computer. They asked me if I’d like to be the one to try it out. This was the beginning of my career change into technology. I simply loved using the CAD equipment and tools. It was primitive of course but it was where I found my true talent. I like to explain it this way: as a designer, I was a piano player, but with the computer I became a pianist.

Fast forward a year or so and we had advanced way beyond 2D drafting to doing 3D modeling with an application called I-DEAS also from SDRC. Back then the computers had such low capabilities that we had to design using a wireframe model. A wireframe model is a series of lines, points and curves that describe the edges of the object, and you can see through it. The model captured by the tool really was a solid model, but it took too long to paint on screen as a solid, hence we worked in wireframes. You’d only render it as a solid model if you needed to show it off to someone else. 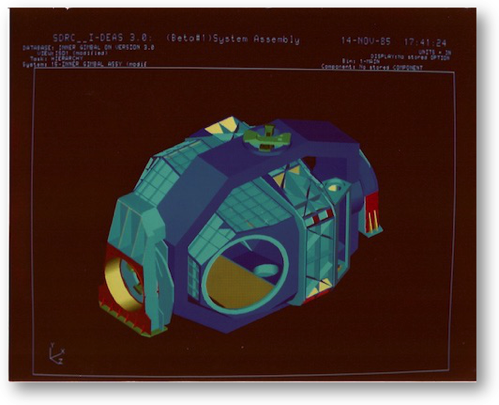 was asked to build the solid model for the gimbal on the Airborne Optical Adjunct (AOA) infrared telescope. The AOA telescope and all it’s parts weighed 8000 pounds, and was mounted in a cupola on top of a Boeing 767 airplane. There was a window out of which the telescope could look, but it was too small to allow us to simply rotate in azimuth and elevation to look around. We had to actually build this mechanism to slide forward and aft along a track as we rotated in azimuth so that we could look out the small window. I never understood how the plane could even fly with a hole in the side AND an 8000 pound telescope sliding forward and aft on a track.

The AOA gimbal was a really complex piece of machinery. I remember working on the model in I-DEAS version 2, and the model got so big that they had to give me a beta of version 3 because I needed more polygons than version 2 could support! They told me later that my model went up on the wall in their corporate headquarters because it was so complex.

I was pretty much done with the modeling when someone thought it would be a really cool idea if we could produce a movie of the gimbal moving to show to our customer. In today’s world, that would be a snap, right? No big deal at all. Type in the rotational angle limits of the two gimbal axes and let ‘er rip. That wasn’t exactly how we did it. 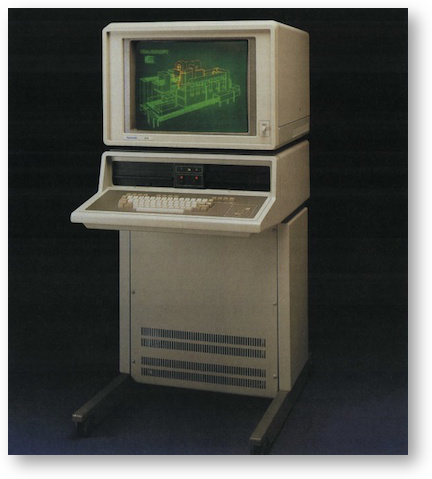 Let’s talk about the computers we had back then. In those days we used graphics terminals from Tektronix tied over a network to MicroVAXes from Digital Equipment Corporation. Each MicroVAX could support up to four graphics terminals and users. The terminals had graphics co-processors designed to take the load off of the host computer. I dug up a DEC price list and the MicroVAXes listed there were $24K, which is around $54K in today’s dollars. 1MB of RAM was $5K back then.

The Tektronix workstations we used as our daily drivers were the model 4107 because they were only $7K each ($16K today). These bad boys had a whopping 640×480 screen on them. As a point of comparison, that’s lower resolution that an iPhone 4. We had one Tektronix 4114, which had a 1024×780 screen and a powerful graphics processor to go with it. Another point of reference, that’s lower resolution than an iPhone 6. We only had one of those 4114s because they were so expensive at $18K each ($40K today).

With all the pieces in place, now I can tell you about the one time I did a computer animation. Someone got the brainiac idea that it would be cool if we had an animation showing the gimbal rotating up and down and side to side.

We started looking at what it would take to do this job. Obviously making a video using the 4107s at 640×480 would be just dumb. We’d have to use the 4114 with its high resolution. But here’s the problem. The 4114 took a full 45 minutes to render the image on screen…once. Seriously. We calculated how many frames we’d need to make a decent animation and realized that there weren’t enough 45 minute intervals between then and when the animation was due to the customer, even if we ran it all day every day.

Now let’s bring in my IT guy, Mike Louie. He noodled the problem and came up with a solution. He figured out that while the 4107s couldn’t actually display the high res images, together with the MicroVAXes they could calculate the images. If we could run screen shots on a bunch of 4107s in parallel, then the 4114 could paint them in just 15 minutes each. At 15 minutes a pop, if we recorded 24 hours a day 7 days a week, we could just get it done in 3 weeks.

Mike wrote a program that commandeered several of the MicroVAXes that would tell the model to rotate so many degrees in azimuth and elevation, render an image and repeat. This was tricky because he’d have to keep track of which MicroVAX had which images on it so they were delivered in the correct order for the animation over to the 4114.

Our next challenge was how to capture these images. We didn’t yet have a way to digitally capture the images off the screen to a video. Other than what those crazy kids over at Industrial Light and Magic and their crazy space movie, it just wasn’t an option. Instead, the audio/visual people issued us an 8mm film camera. This camera would allow you to hit the shutter release once for each frame of film and then pause. 8mm film was normally at 16 frames per second. If we ran it that fast though, we’d have a really short film. We decided to hit the shutter 4 times on each rendered image, giving us a 4 fps film as our end product. You’re starting to get a feel for how totally awesome this video is going to look, aren’t you?

We set the camera up in a tent we made of black fabric, and pointed it at the 4114 terminal. We set up a schedule of people to sit in that tent and every 15 minutes after the image had rendered, hide the menus, and then push the shutter four times. Periodically, Jeff would wheel another MicroVAX down the hall, connect it up to the 4114 to give us the next set of images.

I remember clearly my shift on a Saturday pushing that button for 8 hours. I watched The Breakfast Club on video tape while I sat in that room, stopping the movie every 15 minutes to push the button. One of the less glamorous days of my career.

But this didn’t go as smoothly as we’d hoped. The program Jeff wrote kept crashing so he’d have to restart it on the MicroVAXes. That meant a sequence of images wouldn’t be ready at the right time. We couldn’t stop running to wait for that segment so we’d film out of order, making detailed notes of which segment occurred in which order on the film. That meant some poor person in the A/V department would have to physically splice the film with an actual knife to put it back in order. I should mention that sometimes, some of us (I’m sure it wasn’t me) forgot to turn off the menus on screen before hitting the shutter.

But none of this was the worst problem. When we got the entire film made, we gave it to the A/V department, who dutifully developed the film, and then discovered that the shutter wasn’t completely closing on the camera that entire time. So the first three shots when we hit the trigger looked fine, but the fourth one where it sat on pause for 15 minutes was pure white.

They had to splice out the white frames one by one.

When they delivered the film, it was the worst thing you’d ever seen in your life. They missed some of the white frames here and there so it would flash white, of course the frames were often not in the right order so he gimbal would magically jump from one position to another, and the menu would pop on screen and disappear. It was absolutely horrible.

When I see how easy it is to make video animations today, or heck, just spin a computer model on screen on a laptop, I always think back that to that project. My only sadness was somehow we lost that video. I would have loved to have a copy of it to this day.

1 thought on “Back in MY Day, Animation Was Hard”