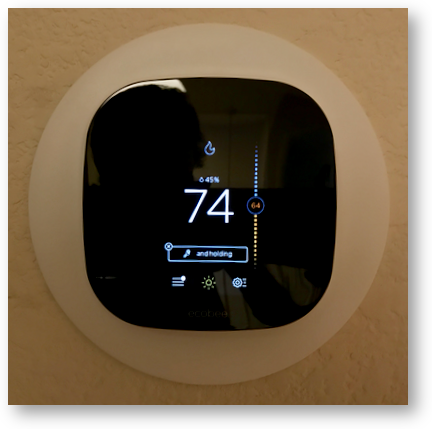 In my previous article I tried to give you the flavor of how to install the ecobee3 Smart Thermostat, and now let’s talk about how it actually works. But if after hearing more about it you feel tempted to buy one, don’t do it. My timing couldn’t be worse on this, because I just found out from Mark Pouley that ecobee will be revealing the ecobee4 next week!

From what I’ve been reading, it appears the new version will not just be a thermostat but will also be an Amazon Echo inside. In Mikah Sargent’s article on iMore, he explains that it’s not just going to have Alexa/Echo support, it will be one. Even if having Alexa (or another Alexa) in your house sounds cool, definitely hold off till the official announcement, and even if you don’t want that the price on the ecobee3 has dropped as a result so that’s cool too.

I think it’s a reasonable assumption that the functionality I like about the ecobee3 will be in the ecobee4, so let’s jump in and talk about it. I asked Steven Goetz to collaborate with me on this since he bought one just now too, and he’s done a lot more playing with his than I have.

You can control the settings for the ecobee3 right on its touchscreen but you can also do it via a web interface. Both methods work really well, but it’s a lot easier to sit at your computer to configure the settings than it is to stand at the thermostat. 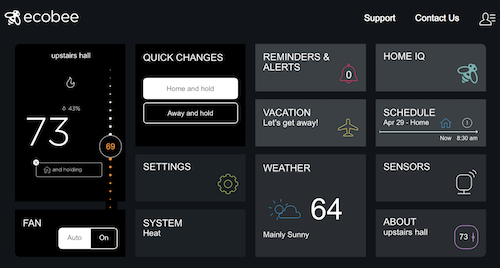 With the ecobee3, you can set up a schedule of different kinds of events. For example, you can tell it that you sleep from 10pm to 6am (I’m sure you get 8 yours of sleep, right?). Then you can tell it you’re away (like at work) from 8am to 6pm. Home, Away and Sleep are three defaults to set but you can add your own, name them and set specific temperatures for each time. They call them “Comfort Settings”. So a comfort setting would be “when I’m home I want it to be 72F and when I’m away I want it to be 66F”. Then let’s say you create an event called “gym”, you choose gym to be either away or home.

Because they did it in a calendar view, you can create these events on say a Monday and then copy Monday to Tuesday through Friday, then set different times and events on Saturday and Sunday. It’s pretty easy to figure out, no manual reading required.

You can also set temporary Vacations where you simply tell it you’ll be away for some length of time and set the temperature you’d like maintained. Remember I said this was a web interface? Well you don’t go to the IP address of the thermostat to access and change your home and away times, it’s actually a login at ecobee.com.

Both Steven and I had a moment of pause when we thought about putting into a web interface when we’d be gone for extended periods of time from our home and that web interface also knows our home address so it can give us local weather! I went hunting for information on the security of our information. I didn’t have to hunt far to find what I was hoping to see. Here’s what they said in their Network Security & Encryption support article:

That sure sounded like all the right words, but I decided to check with Bart too. He explained that the way the protect the login is the next bit of critical information. While ecobee doesn’t have two-factor authentication for the login, changes to the password are done through a password reset link on the website. I tested that, and it sent me an email, I clicked the link and I could change it online. I called the support line to find out if I could change it over the phone, and they told me they could not do that for me, which was great news, because that vector for social engineering wasn’t open. I also noticed that if I leave my web browser unattended for a bit, ecobee logs me out. I’m satisfied that this is secure enough for me but you might make a different choice. I would have liked them to let me just log into it directly as a device on my network.

I mentioned in the setup article that the ecobee3 has room sensors. With those devices in place, you can tell the ecobee3 to work in one of two distinct ways. You can tell it to take the average of all sensors in the house, or you can tell it to only average the temperature of the rooms where it senses people. They call that mode “Follow Me” so of course I chose that.

But then Steven taught me about another cool feature. Steven’s one sensor is in his son Jack’s room, but his wife Lisa works from home. She isn’t moving in a room with a sensor, so how do you tell the ecobee3 to keep the house warm for her? He did something ingenious to trick the thermostat. He created a Comfort Setting called Lisa Work. He set the mode to away for that Comfort Setting, and told it to look at the sensor in her son Jack’s bedroom, the one sensor she would not trigger while working. But then he set the Comfort Setting to a comfortable temperature. It’s kind of a head bender and I had to have him explain it a few times, but it’s proof I didn’t give him the title of Research Assistant Steven for nothing.

Steven really likes the Smart Recovery mode. Let’s say you program in that you’ll be asleep from 11pm to 7am. In Smart Recovery Mode, you have it set for the temp overnight to be 67 degrees, but you like it at 72 while you’re awake. It will start heating the house before 7am, so that it’s reaches 72 at 7AM. Our old thermostat did that too but it was really hard to program.

The real fun of the web interface is the Home IQ page. In here you can see the effects of the settings you’ve made as a function of time. One of the reasons I asked Steven to help me with this review is because his charts are way more interesting than mine. You see, we don’t have central air conditioning and it won’t get cold here again till probably October if I’m lucky.

In addition to the programmed times you expect to be home and away, if the ecobee3 senses you’re not home, it will change to the Away temperature you have set in Comfort Settings. That way you don’t have to fiddle with it every time you leave or arrive home unexpectedly. Steven sent me a screenshot of his house on a day when his wife went out in the middle of the day when she normally works from home. You can see a distinct drop in the desired temperature in the graph because the ecobee3 knew she was away and figured it would be ok to drop the temperature. That’s pretty darn cool.

There’s a bunch more graphs to look at that are really fun, but if that’s not enough, there’s even a download link that gives you a CSV file so you can import to Excel and make your own pivot tables. How cool is that?

I asked Steven to also tell me any downsides to the ecobee3. He put price on his list because it was $250 when we bought it and there are cheaper alternatives, like the WiFi-enabled Honeywell at $150. The ecobee3 now lists for under $200 on Amazon so that’s not too much more since it will be the “old and busted” model in just a few days. And let’s not forget that you can get a programmable thermostat for as little as $22.

You might be able to get a rebate from your gas and or electric company. In Southern California, the gas company will rebate me $75. I checked a few other zip codes, New York and Utah, and they both had rebates over $100, but Steven said in Canada he couldn’t get any rebate at all. So your mileage may vary but it might make the cost of this home automation a lot more affordable.

Steven also doesn’t like that the System Monitor (the cool graphs) are an hour behind, but I’m not sure I see a big temperature graphing emergency I need to monitor coming up.

Here’s a tiny little feature that we need – the ecobee3 will send you an alert when your heater filter needs to be replaced. I know, we could use Apple Reminders to do it but we’ve just never gotten around to setting that up.

In case you’re wondering, the ecobee3 is pretty much inaccessible. The onscreen controls, near as I was able to figure out, have no text to voice options, and the web interface was filled with unlabeled buttons and inaccessible graphs and controls. It’s a shame they didn’t think about accessibility.

Remember I wanted the ecobee3 because it was HomeKit compatible. In HomeKit I can now see all of my sensors in HomeKit, not just their temperature but whether they’ve been triggered. Once you get multiple HomeKit devices, you can create a scene! Not the kind where you embarrass your partner in a restaurant though. A scene is something like “Good Night” where it turns your lights off, turns down the thermostat and locks the doors.

I was so excited to set up some scenes like that to control our Hue lightbulbs and our ecobee3, so very cool. Ok, the thermostat doesn’t do anything for the next six months but theoretically it could, right? I have to say, being able to talk to our Hue lights from the Apple Watch has been fantastic. I can run into the room, notice the light is still on from when Steve got up in the dark and just ask Siri to turn it off. So awesome.