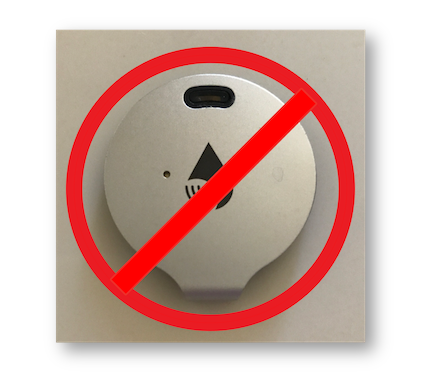 I’m a positive person, so if I don’t like a product, you won’t hear me review it. I’ll usually write to the company selling the product instead and tell them where they can improve. That’s why you don’t often hear me tell you not to buy something.

But I’m going to make an exception today. Please don’t buy the TrackR. TrackR is a coin-sized device that you’re supposed to hook on your keychain, throw in your luggage or purse, or hook to Fido so you can find these things if they ever get lost.

The TrackR uses Bluetooth Low Energy to be discoverable by an app on your phone. They also have a mesh network so that other TrackR users’ phones will detect your device if they’re ever near it, allowing your phone to see the last known location even if you’re not near the device. I’m sure you’ve probably heard the TrackR being advertised on many tech podcasts, and review sites singing its praises.

Our good friend Pat bought 10 TrackRs last year and gave Steve and me two of them. Steve put one on his keys and I put one in my purse. We played around with the app for a few days and saw that it was tracking the device and we were happy. You could also make it make a noise, but it wasn’t really loud enough to be helpful.

When we got back from our trip to Las Vegas for NAB, Steve couldn’t find his keys. We hunted around the house for a bit, called the hotel we’d just left but couldn’t find them. And then we remembered the TrackR. Steve pulled up the app and it showed that his keys were at our gym. But it said they were at the gym in November of 2016! I pulled my TrackR out of my purse and held it in my hand, pulled up the app on my phone and it showed my TrackR as being at the Segerstrom Theater in Orange County…where we saw Shai perform in Mamma Mia back in November.

So what’s the one flaw that would make the TrackR useless? How about if the battery dies and it doesn’t tell you? Evidently these batteries only last 4-7 months according to TrackR themselves, and you have to order new batteries from them! Possibly forgivable to be that short, but completely unforgivable that the app never told us the battery was dying or had died.

I wrote to the folks at theTrackr.com and asked them for help. The response I received back after explaining that my TrackR appeared to have died was unbelievable. The customer support rep wrote what was clearly a canned response:

The best thing to do would be to walk around the place you last remember having your item with the TrackR app open. Once you come within bluetooth range of the device your app will show as connected and you will be able to make the TrackR attached to your missing item ring. If you are unable to connect to the TrackR your item may not be in the area you are looking. If this is the case you can use our Crowd Locate network to get a location update for your item whenever another TrackR app user comes within bluetooth range of your device.

She wished me the best of luck in finding my belonging though, so that was nice.

You can bet I wrote back suggesting that perhaps she actually read what I wrote. You won’t believe what her answer was to that email (or perhaps you will). She told me to take the batteries out and put them back in, that maybe they’re not dead. And also to reboot my phone, turn off and on Bluetooth. Un. Freaking. Believable.

After this happened, I wrote about it in our Facebook and Google Plus groups, and I was really surprised at the response. No one single person said “wow, I never had that problem with mine.” Every single person wrote that their batteries had all died too and they hadn’t been notified. I checked with Pat and the other 8 she had purchased were all dead as well.

Recent updates to the TrackR app now say that you will get notified if your battery dies, but I sure wouldn’t trust it.

So yeah, don’t buy the TrackR, save your money. One bit of good news, Steve finally found his keys – they were in a hidden inner pocket of his new backpack that we both had missed the first time through searching it.