I’m going to break my cardinal rule. I’m going to give you a tip about music. I’ve always said I will never help anyone with iTunes or anything related to music. Ask Honda Bob how many times he’s called me asking for help in iTunes and just write back, “nope”.

I guess I should explain why I’m breaking my own rule.

You know I’m a big fan of Don McAllister’s ScreenCasts Online. In Part 3 of Don’s iOS 11 tutorials, he covered changes to the Music app. One of the fun features Don demonstrated was how you can share playlists. I’ve heard people like to do that sort of thing.

Don explained that if you have any existing playlists, you can’t share them; you have to create new playlists to share them. That got me curious. On my iPad, while on the elliptical at the gym, I took a look at the Music app. I was hoping I’d created a playlist at some point.

Then I remembered that for our grandson Forbes’s first birthday, Lindsay’s party theme of Wild Things required a playlist. I took charge of this critical task and as people hollered out ideas, I went into Apple Music and added them to a Wild Things playlist.

Don demonstrated in his tutorial how in the new version of Music on iOS when you create a new playlist, there’s a switch that says “Show on My Profile and in Search”. That’s what we’re looking for on an existing Playlist.

As Don demonstrated, if you open an existing Playlist, and hit the three dots you’ll see an option to Share, However, this simply opens the standard share sheet to send it to someone via email or text message, not to share through Apple Music.

Within that same menu though, there’s a button to Add to a Playlist. Well, it sure makes more sense to hit Share, but it turns out you can add an existing playlists to playlists. I clicked on Add to a Playlist… And from there selected New Playlist… and gave it a new name. I called mine Wild Things 2 because I’m just that creative. Within that new playlist is the lovely Show on My Profile and Search option that we seek.

After I found this, I searched for Don in shared music and followed him. He must have fallen out of his chair when he saw the follow because he knows that music is definitely not my thing. He followed me back and verified that Wild Things 2 was visible to him. I was so excited to figure this out for him! 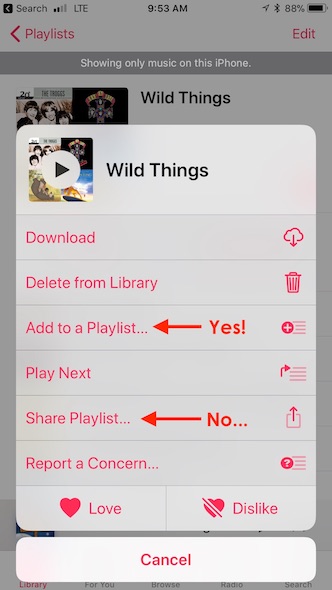 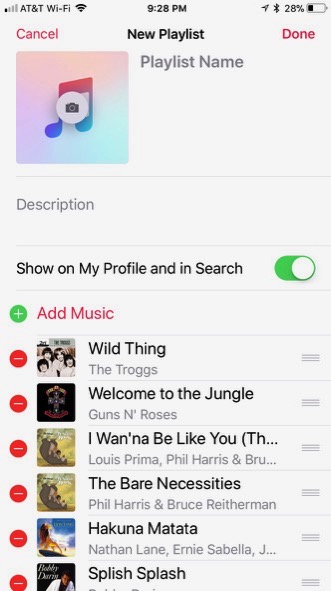 So there. I gave you one tip about music. Don’t expect to ever see another one.