Steve and I have been moving very cautiously into having a smart home. We started with a smart smoke detector with the Nest, then a couple of Hue lightbulbs came on the scene. We added a couple of Wemo switches somewhere along the line, and eventually a couple of security cameras, as I’ve told you about before. The one thing that really gave us pause was the idea of a smart door lock.

But then I heard about how people can take a photo of a physical key and create a duplicate physical key. Heck, there are even apps for that! So, we’re not necessarily more secure with physical keys.

But then I started talking to that crazy Joe Dugandzic of Smarter Home Life, and he talked about his cool August Smart Lock. I was jealous, but I still didn’t jump. Then I listened to a podcast (and I wish for the life of me I could remember which one) where they talked about someone testing a whole pile of smart locks and determining which had good security models. The August Smart Lock was on the good list. Additionally, the August Smart Lock is HomeKit-compatible. It isn’t the only smart lock that’s HomeKit compatible, but that definitely played into our decision. If you’re a fan of Alexa, she can play with the August devices as well.

So for Christmas, I asked Steve to get me the August Smart Lock Pro + Connect. I figured he’d only let me have it if he was willing to have it on the front door too. While I got it for Christmas, even then we had trouble getting up our nerve to actually install it. But then, as you heard last week, we talked to Lisa Auslen from August at CES, and she pushed us over the edge. We were finally mentally ready to do this thing.

I do have an actual problem to be solved, other than wanting to be one of the cool kids like Joe. Every afternoon I drag poor Tesla out on a long walk. I carry my iPhone in my SpiBelt, and I have no pockets in my shorts, so carrying a key to the house is a problem. My solution? I leave the front door unlocked when I go on my walks. What if I didn’t have to carry a key and yet I could lock my front door or, better yet, it locked automatically?

Installation – Not as Hard as You’d Think

I was worried that changing out the lock was going to be a big ordeal. As is true in most households, Steve and I argued about who would get to do it. In an odd moment of compromise, we decided to do it together. I assure you it took longer than necessary because of this decision.

The August Smart Lock works by replacing the thumb latch of your deadbolt on the inside of the door. You must have a separate deadbolt from your regular door handle to use this August smart lock. In fact, I highly suggest you check their compatibility info before purchasing (we didn’t and got lucky). 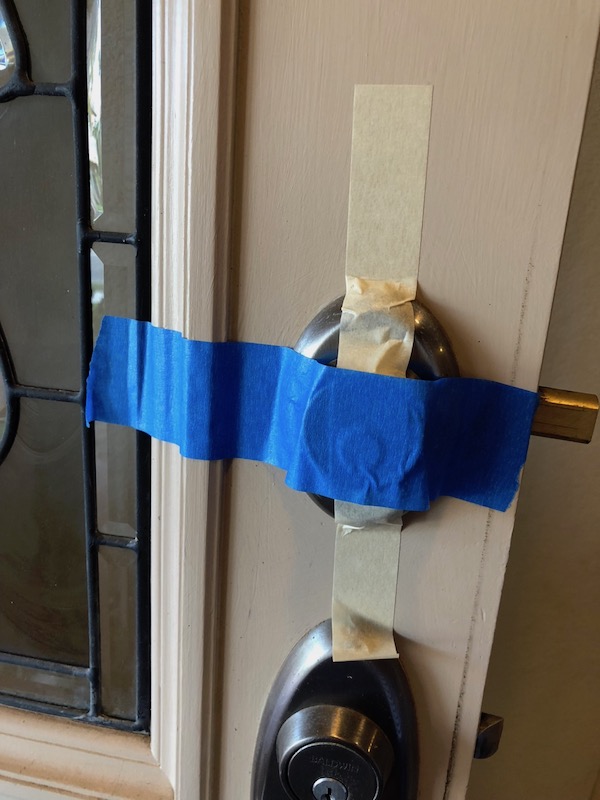 Note that I specifically said on the inside. The outside of your door has zero change after installation. You still have a deadbolt with a keyhole and your key still works, so in the event of a power outage or dead batteries, you’ll still be able to open your door with a key. Since there’s no change outside, no one can tell you even have a smart lock. That really makes me happy. You guys won’t tell anyone I have a smart lock, right?

Installation was an absolute breeze. August gives you a big strip of tape to put over the outside of your lock. This is to hold the mechanism in place and maintain alignment while you take the inside part off. Steve added some painter’s tape to be sure it held in place.

The next step is to unscrew the thumb latch mechanism on the inside of the deadbolt and simply pull it off. August supplies at least one little metal plate that replaces the thumb latch and provides a base onto which you mount the August lock. I say at least one because the instructions in the app and online said we’d get a couple with several different options of colored screw things, but we just had one and it was adjustable to line up with the screw holes. I spent 5X as much time reading the instructions as I did just screwing in the plate. 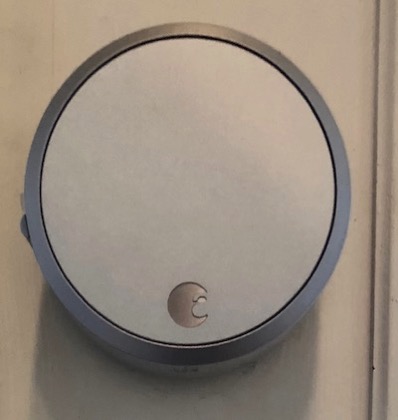 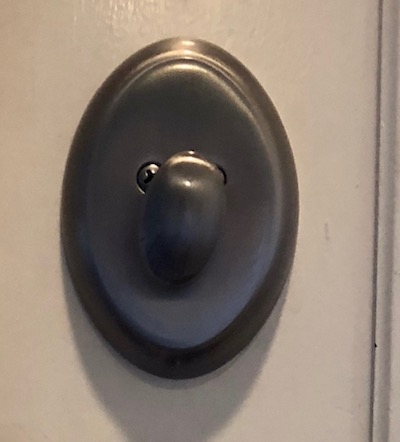 The August Smart Lock itself is a big cylindrical “doorknob” that’s either dark grey or silver. It’s 3.5 inches in diameter and sticks out 2.25 inches. That sounds huge, but it just barely covered up the area where my thumb latch was originally mounted. The mechanism to connect the new doorknob to the plate we just screwed down was quite clever. The August doorknob has two little flanges that you simply flip down to hold the doorknob to the plate installed underneath. 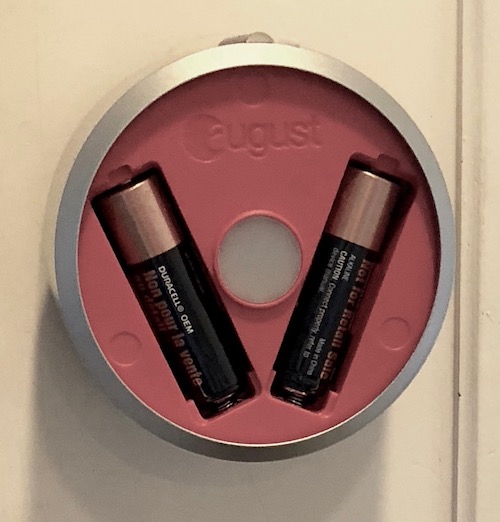 Once the August doorknob has been installed, you can physically turn the knob and unlock or lock your door. Again, power outage, fire, you just turn the handle. The August Smart Lock mechanism actually physically turns the knob and engages/disengages the deadbolt using two AA batteries when used as a smart device. They could not have made these easier to replace. The front circular plate of the doorknob that provides access to the batteries is held on magnetically, so if you push anywhere on the face near the edge, it pops open and into your hand revealing the two batteries.

The hardware setup was super easy, and shockingly so was the software setup. The August app automatically asked to access our HomeKit data and interestingly asked for access to my camera. August requires all users to upload a security photo so they can more easily identify each other when sending and receiving invites. Well ok then!

Next an email was sent with a code for verification. From there it told me to stand near the door and it scanned for locks. The app found our new lock and asked me to give it a name. There was a firmware update required for my lock and I found that very comforting. You WANT your smart devices to get firmware updates, right?

My August Smart Lock came with what they call a DoorSense device. This is a little module containing a magnet that you can either stick next to the lock, or embed inside the door jam, and its purpose is to help tell you whether your door is open or ajar. Steve drilled a hole and embedded it in the door jam, and we followed the next step to calibrate the DoorSense device.

One of my favorite things about setting up HomeKit devices is how the app will ask you to scan a little 8-digit code that’s on the device and boom, the device is authenticated to HomeKit.

At this point though the August Smart Lock will work when I’m standing next to the door, using Bluetooth. But it will not work when I’m away from home. One advantage of having a smart lock is you can let someone in while you’re away and you can give people temporary privileges to go in and out. That’s why Airbnb uses August Smart Locks. 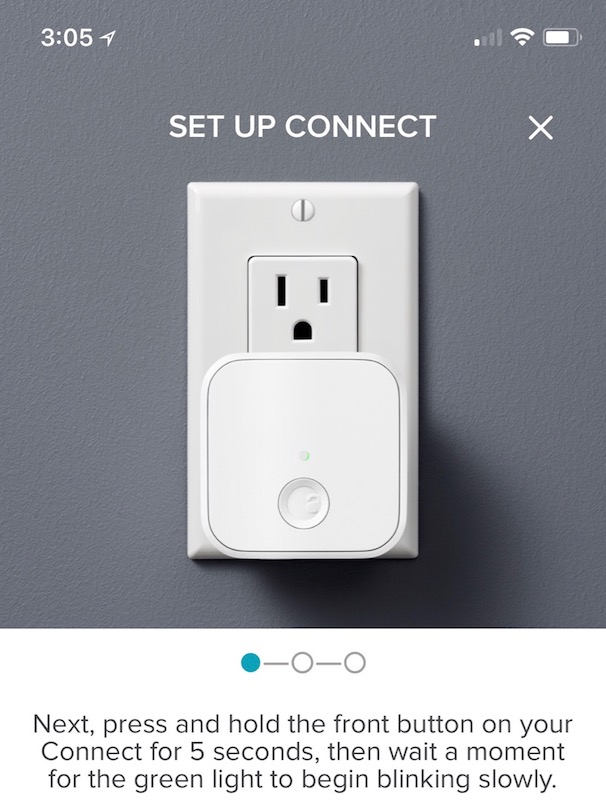 In order to get access to the door when you’re away, you need to install another device called the August Connect. This is a WiFi module that you plug into power near the door, and it relays info from your network to the August Smart Lock. Setting it up to connect to my WiFi wasn’t too hard but we’re pretty used to these things being a nightmare.

Press a button, wait for a Blinky light, tell it which 2.4 GHz WiFi network it should use, wait for an error, rinse and repeat until you beat it into submission. Oddly after doing the dance a few times, it came back and said it was connected to my 5 GHz network. Go figure.

How Does it Work?

Finally, we can talk about how awesome the August Smart Lock is in day-to-day use. I am absolutely in love with this device. I put the leash on the dog, I open the doorknob, and I walk out the door. When I’m a house or two away from my home, I get an alert on my Apple Watch and my iPhone telling me that my house has been locked. I get back home, and my door unlocks when I walk up to it. Boom. All problems solved. Well, one problem introduced – both the August app AND the Home app send me a notice every time the door is unlocked and locked. And they both send the message to Steve. We had to turn off the August notification because it was a bit too much.

If auto-unlock makes you nervous, you can turn this feature off in the settings. Without it, you open the August app on the iPhone and tap a big red circle and the door unlocks and the big red circle gets replaced with a hollow green ring. The August Apple Watch app will also unlock, but the watch is so slow it’s actually faster for me to dig out my phone and unlock the app.

There’s also a setting to decide whether or not you want the lock to make a noise when it unlocks and locks. You’d think that all of the notifications would be enough, but the sound of it unlocking is a pretty little chime and when I hear it I know Steve has come home so it makes me happy.

There are a lot more options in the settings for the August Smart Lock but one, in particular, makes me nervous. Remember I said the door locks when I leave? That’s because I’ve turned on the Auto-Lock option. It’s on a timer and I set it for 2 minutes. This is great for my walks, but I can imagine scenarios where this could be a problem. Let’s say I go out the front door just to take in the trash cans. I wouldn’t bring my phone with me for that, but what if my neighbor stops by to chat while I’m out there … I’ll be locked out of my house. It’s going to happen, it’s just a matter of time, right?

If you’ve been thinking about getting a HomeKit or Alexa capable smart lock, I think the August Smart Lock Pro + Connect for $249 on Amazon Prime is a great device. Go ahead, it’s not scary at all.