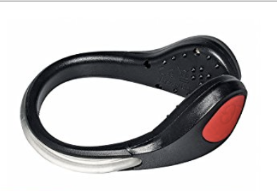 In January I wrote a post entitled Nite Ize Taglit Might Save Your Life. I explained that I was nearly hit by a car twice while walking Tesla in the early evening hours. I figured that I might live a bit longer if I lit myself up with blinky lights. At Bart’s recommendation, I bought the Taglits from Nite Ize and I’ve had several people actually stop their cars to tell me that they saw me because of them.

But Bart had an idea for yet another addition to my ensemble. He bought a pair of LED shoe clip lights for when he’s cycling at night. He was so pleased with their effectiveness that he bought me a pair and sent them across the pond. The design is quite simple. It’s a C-shaped band that clamps around the upper heel of your shoe, and it has a big button you push to turn on the LED. The LED itself goes all around the C so you’ve got a big area of your shoe lit up when they’re on.

These things are REALLY bright and at night you couldn’t possibly miss them unless you were looking at your phone while driving. You don’t do that, right??? Like the Taglits, the first button press turns on the bright red LED, the second press makes the show clip blink, and the third press turns it off again.

I had Steve take a Live Photo of the LEDs, and then I used a cool app I’ll tell you about later to make it into a tiny movie. You can see how crazy bright they are, but it’s a bit upsetting to watch as they two shoes are not blinking at the same rate. If you’re not OCD you’ll be ok with it, but who here is like that?

He bought me the Karrimor XFLARE LED Shoe Clip from karrimor.com/…, “2 for £8!” And I put a link in the shownotes to them. They don’t ship to the US so that leaves me open to giving you an Amazon Affiliate Link to a similar product.

But before I do, let me explain what to look for in an LED shoe clip. The Karrimor version Bart sent me is black, with red LEDs. I think red is the best color for this use, but many of the ones I found on Amazon were in silly colors like pink. I also found many of these, when sold in pairs, were unmatched like the left would be white and the right would be black. I found that annoying.

But the most important thing to look for is the battery replacement. For decades we’ve been tortured by the plethora of watch batteries out there, and finally, it appears that the industry is standardizing on one battery model, the CR2032. Now that so many companies are using them, you can get a 10 pack for only $5.35 on Amazon. My goal now is to only buy gadgets that are either rechargeable or use CR2032 batteries.

I finally found the TEQIN LED Shoe clips for $15.99 on Amazon for a pair of black with red LEDs. It even comes with a velvet bag! I know that’s more than the ones Bart found, but many of the cheaper ones I found had really low ratings, used the wrong battery, had pink LEDs or were mismatched and I just couldn’t recommend them.

I love my new LED blinkers and if you go out late at night cycling, walking, or running, I can highly recommend them for your safety.