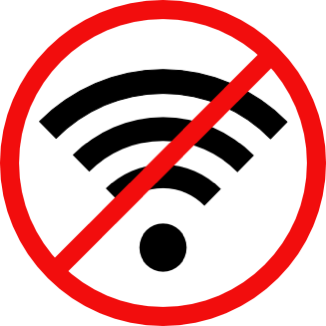 My mother-in-law Merlee is one of my favorite people on the planet. She’s one of the kindest, most caring people I know. But this week she made me love her even more, because of how geeky she is.

A few months ago Steve’s parents moved from 2 hours away to 4 hours away. It’s not that much farther, but they were on the way to Lindsay’s house so if they needed some help it was pretty easy to stop by. But now they’re in the opposite direction and it sometimes feels like they’ve moved to the other side of the planet.

This week Merlee sent me an email explaining that her computer could no longer access the Internet. Most “norms” in this situation would stop the description right there, but Merlee did some great diagnosis for me. She gave me these facts:

These clues in combination were enough to start narrowing down the root cause. If it had only been her Mac, I’d have concentrated efforts there, but as soon as I knew the Roku was offline, I figured it had to be the router. Odd that other devices were working but it was still a big clue.

I suggested we unplug the router, wait 10 seconds, and plug it back in to reboot it. But I mentioned that she’d been knocked offline once before and was this how we rebooted her router? Luckily her memory is far superior to mine, and she said, “No, last time you had me reboot it with a toothpick in a little hole on the back.”

Off she went to get a toothpick, after mentioning that she had a metal one but figured that would be a bad idea and she should get a wood one. Another point for Merlee.

Sadly, after rebooting, her Mac still wasn’t online. I asked her to look at the WiFi signal indicator in the menubar and she told me it was grey. I asked her to click it and see if she could see their WiFi network. Oddly she could see the name of their network from when they lived in their previous house, but I was pretty sure the new network had a new name. Steve’s sister had set it up and hadn’t used the same name or password.

I had her trot over to the other room to Ken’s Mac and asked her to see what it was connected to, and sure enough, it was a new name. I had her trot back to her room and explained that this was all an elaborate method to get her more exercise. This time when she looked at the WiFi signal, she could see the new network, but when she selected it, it queried her for the password.

It did explain that if she moved an iPhone or iPad close by, it would offer to enter the password for her, but her phone didn’t offer it up. I’ve seen that before where maybe it fleetingly disappears before you can say “yes please share this password”.

No problem, Merlee and Ken are both avid users of 1Password so I was certain the password to the new network would be in her vault. But oddly it wasn’t. I had her trot back to Ken’s Mac and again oddly it wasn’t in his vault either. No problem, Steve and I make a habit of adding some of their important passwords into our own 1Password vaults, I’ll just check in ours. Oddly for times three and four, neither Steve nor I had recorded their WiFi password. I have no explanation for how or why none of the four of us recorded this password, it’s not like us!

At this point, I suggested to Merlee that she try to find the original paperwork from when the network was set up by Steve’s sister because I know that’s where I discovered it when we set up their computers. While she loves the geeky part of experimentation, there was a lot of hesitation on her part to dig in the files. Again I love her more every day.

The paperwork was a bust too. And then I had a delightful idea. Merlee would have been up for the execution of this solution but I wanted to see it with my own eyes, so I wanted to log into Ken’s computer and control it. 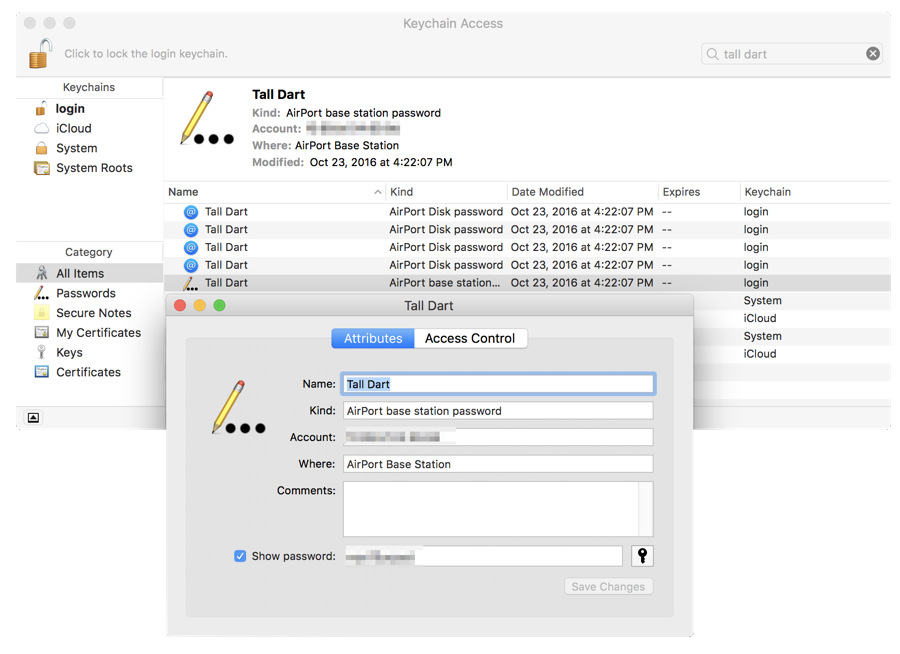 Since Merlee hadn’t been exercised in a few minutes, I had her trot back to Ken’s computer. I asked her to open the Messages app, and then I messaged Ken. She saw the message, and I asked her to open it up and look in the upper right corner for the word “details” in blue. When she clicked on that, I told her to click on the two blue rectangles and that would prompt her to share Ken’s screen with me. She did it in a snap and I was in. Next I clicked a button on my screen that allowed me to ask her permission to control the Mac and she allowed it.

Now for my brilliant idea. I realized that the password to their WiFi router must be stored in Ken’s Keychain and it’s possible to expose the unencrypted text of this password. I opened his Keychain Access, did a search for the name of their network, double clicked it, and then clicked the box that said “show password”. It asked me to authenticate to Ken’s machine, and Bob’s My Uncle, I could see the password to their WiFi network.

Perhaps most of you had thought of this sooner than I did, but I was quite proud of my little self for figuring out how to find this password from a distance. I don’t often poke about in Keychain so even remembering it’s there was a miracle.

One big question remains, and that’s whether her Keychain has some kind of corruption as it lost this password in the first place. In the old days, there was a feature called Keychain First Aid, but that tool has been removed from Keychain Access. I did a bit of reading on how to repair Keychain in High Sierra and it looked awfully convoluted. I’ll probably noodle this for a while and attack it next time I’m there in person. If any of you have ideas on how to fix this problem or maybe you know that the problem has nothing to do with Keychain, please shoot me note about it at [email protected].

There’s one more delightful part to this story of Merlee and her geekiness. It took us an hour and a half to get her Mac online, but when she checked her Roku, it was still offline so her Netflix wasn’t available. She suggested we just give it a rest because we were both tired of working on this. In the morning I got the most wonderful email and I’d like to read it to you.

You inspired me……..after much trial, and even more error, I got Netflix back online!! I kept remembering that you never got discouraged and always had a new idea on how to fix the problem so I just couldn’t give up until it was done.

I love that Merlee is so geeky and unafraid to try this stuff. It makes her a real delight to help and certainly, her victories make me happy too. Of course, when it was all working, that darn WiFi password was put in Ken, Merlee, Steve and Allison’s 1Password vault!