In our Facebook group (podfeet.com/facebook), John Mola asked what we like to call around here a “Dumb Question. In other words, a really interesting question that might trip up a lot of people. Here’s what he posted.

How do you see how big a picture is? I took a screenshot and also a picture of a paper. And I wanted to send them to a group text but it’s not working. Some told me they think it’s too big.

To clarify, John is trying to do this on an iPhone, not on a Mac. John received a few good suggestions, but I found the problem intriguing enough to jump in too. One idea I came up with was the same suggestions that Rick Abraham had (but I didn’t notice that he said the same thing when I added my idea!)

The main problem is that Apple hasn’t ever added the most basic functionality to Photos on iOS. It drives me bonkers that I cannot rename my photos from my iPhone or iPad or see any of the metadata like John wants to see. 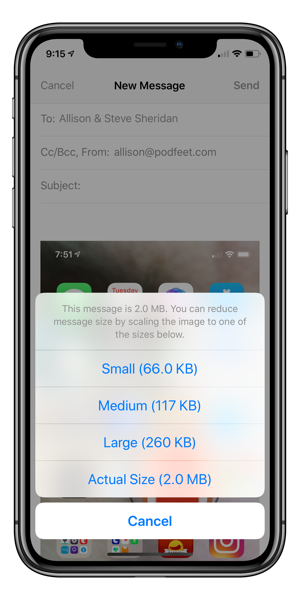 The idea Rick and I suggested requires no third-party software and is a bit of a hack but it would work for John’s purpose. Tap on the share button for the image in question and choose Email. Address the email to yourself, then hit send. Before it sends, if the image is large, it will suggest that you could reduce the size of your message by choosing one of the scaled image options shown and reveal the sizes of the options.

I tested this idea using a screenshot with a lot of detail in the image. The email I created offered me choices from small at 66 KB up to large at 260 KB and showed me that full size was 2 MB.

I took another screenshot, this time of the Settings app, and evidently, all that plain, white space makes for a very small image, so when I hit send, it actually did send which surprised me. I opened it on my Mac and it was only 300 KB. I thought it was interesting that Apple Mail was smart enough to know it didn’t need to offer me any smaller sizes.

If you truly do just want to see the metadata on an image on iOS, you can download the free (with ads) Photo Investigator app in the App Store itunes.apple.com/…. This app is atrociously ugly, not optimized for the iPhone X/XS screen and the ads are revolting, but for free it will show you the size of any image in your library.

It also shows you the geolocation, the time and date the image was taken, and the EXIF data for things like ISO, shutter speed, etc. It was really hard to figure out how to actually buy the app. There’s a puke-colored banner at the top that is partially covered up by the notch around which the developer hasn’t designed. In that banner, I read the words on the left and right and figured out it was trying to offer to me to buy the app. For $2.99 you can edit your photos’ locations, captions, copyright, and timestamps and you get the annoying ads removed.

There’s another option, and it’s one you’ve heard me talk about in detail, and that’s HashPhotos for iOS. I’m still in love with this app and everything it can do. HashPhotos allows you to see the size of the file but isn’t ugly and has no ads. And the app is free for a lot of features.

And remember that HashPhotos has an extension to resize images too so you could resize an image all inside HashPhotos and send your text message directly from there.

John and I have gone back and forth on these solutions and he appreciates the help, but the more we dug into it, the more we’re sure there’s something else preventing him from sending these images via group text. He checked his ISP (Sprint) and their limit is 90 MB which video size, not photo size.

But, I thought the exercise was pretty fun anyway to figure out how to work around Apple’s dumb restrictions on what Photos can do on iOS.

2 thoughts on “Dumb Question Corner – How Big is My Image on iOS?”