If you’ve been listening to or reading my content for the last few years, you know I’m crazy about the Wyze Cam security cameras. They first came to my attention when Joe Lagreca told me about them when we hung out at CES a few years ago.

The original Wyze Cam is a tiny cube of a camera, only around 2 inches on a side, and only costs $25 shipped. The 1080p video is incredibly good, they stand on an articulated base so you can point them where you want, and they have 15 days of free cloud storage, or you can use a micro SD card with them.

Then Wyze came out with the Wyze Cam Pan. This camera is a taller rectangle but can pan around on a schedule or on demand from their app. It costs a bit more but is still stupid inexpensive at $37 with free shipping on Amazon. I wrote an article about my addiction to Wyze cameras when this one came out. Now I have three original Wyze Cams and one Wyze Cam Pan.

In early April, Wyze announced that they’re getting into the sensor business. When we got the Ring alarm system in our house, Steve really wanted was a sensor to tell him if we’d remembered to close the garage door. But putting one on the garage door created this weird no-man’s land inside the garage where there was an alarmed sensor on both doors.

The sensors announced by Wyze, call Wyze Sense would have several advantages. I knew they’d be inexpensive and yet of good build quality with great software. In their marketing for Sense, they demonstrated how tiny they would be by showing that you could put a Sense on a dog food container so you’d know when someone fed the dog (or at least teased the poor thing with an open container).

I jumped on the opportunity to order a Wyze Sense Starter Pack on day one, not realizing that I had joined what they call the “Early Access group”. Evidently, they only had a small number of preorders available and I got into the first batch. That becomes important later in the story.

For a grand total of $20 with the Starter Pack, you get two Wyze sensors, a motion detector, and a wireless bridge, all in a teeny box approximately twice the thickness of an AirPods case. For comparison’s sake, the sensors we got for our doors and windows from Ring are $20 apiece. The entire Starter Pack fits in the palm of my hand.

Sensors like this don’t have WiFi built in for many reasons. They’d be bigger, more expensive and wouldn’t get good battery life. Instead, the manufacturers sell you a wireless bridge. The sensors talk to the bridge and then the bridge talks to your router, which then gives you access at and away from home. The design of the Wyze bridge is positively genius.

On every Wyze Cam, there has always been a USB port, but they never provided an explanation for why it’s there. The Wyze Bridge that comes with the starter pack, plugs into any Wyze Cam via USB. It actually completes the back of the camera so that all you see is a small cloth tether to pull it back out. If you’ve got multiple Wyze Cams as I do, you can move the bridge between cameras until you get the optimal wireless coverage for your home.

Once the Bridge is installed you can start initializing the sensors, much the way you would their cameras. In the Wyze app, you select Add New Device, choose whether it’s one of the camera models, a sensor or a motion sensor, give it a name and you’re done. Now on the home screen of the app, you can see all of your cameras, sensors, and motion detectors.

We put one of the Wyze Sense sensors on our garage door. When we did this with the Ring sensor, on top of creating the no-person’s land in our alarm system, the sensor was actually so large it was hard to place it properly. It wasn’t trivial to place the diminutive Wyze sensor either, but by rotating one side Steve was able to get it in place.

With our notifications turned on for all of our Wyze sensors, we now get several new alerts. We are notified when the garage door opens when it closes, and probably most importantly we get a notification if the door has been left open for 30 minutes. You can also tell at a glance if a sensor is currently open. In the Wyze app, you can choose which of these notifications to get, and how long a sensor is open before you want a notification. I like the granularity of those options.

In the ad for Wyze Sense as I mentioned, they show putting a sensor on something as small as a pet food container. If you’ve got someone supposedly feeding your pets while you’re away, you could get notifications when that container was opened and closed. Maybe this isn’t a use case you have but I bring it up to illustrate that these sensors can be used for much more than doors and windows. Maybe a liquor cabinet could be monitored when teenagers are home alone for a weekend? Not that your kids would do something wrong of course. 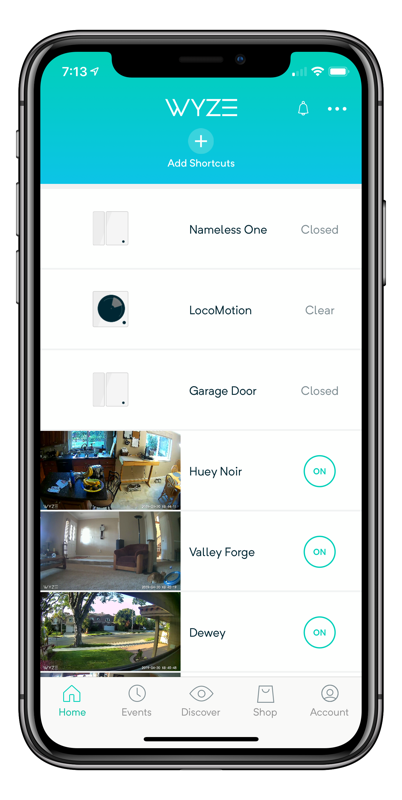 I’m a big fan of setting up automation sequences in HomeKit but I have to tell you that every time I set up a new one it takes me hours to get back into the hang of how they work. With the Wyze software, it could not have been easier.

Wyze has Shortcuts, Actions, and Automations. Let’s do a couple of simple examples to illustrate how easy these are to create. Let’s say when you close your bedroom door, you want to activate the two downstairs cameras but not the upstairs camera and you want to get notifications from the app. You create a Shortcut, call it Nighttime. Once the Shortcut is created, you add Actions to it. Under Universal Actions, you can turn on App Notifications. Then under Device Actions, you can drill down into each camera and tell the app what Action you want to take place. In our example, we can turn on two cameras and turn off the third.

You could stop here and just tap the Nighttime Shortcut button you now have on the home screen but let’s get fancier. You could toggle on Automation, and then choose one of two options. You can have the Shortcut triggered by a time of day or by an Event. An Event can be closing of a sensor you put on the bedroom door. I was able to create a fully-functioning automation similar to this scenario without reading the instructions because the screens are so very clear and easy to follow.

You can also trigger events when something more serious occurs. All Wyze Cams automatically detect the sounds of smoke and carbon monoxide detectors in your home. Evidently, those sounds are standardized. So you could have cameras and notifications turn on whenever any of the cameras detect those emergency sounds. You can also have this happen when they detect any sound or motion.

I created a test Shortcut using one of the sensors I got in the Starter Pack. I simply had all of the cameras turn off whenever the sensor was opened and turn on again when it was closed. I found that the app wasn’t 100% consistent in changing the icon next to each camera to show that it was off (some would toggle to off, some would not) but I could tap into each camera and verify they were definitely turned off. The sensors are really new and the team at Wyze is really responsive about sending out updates so I’m sure they’ll get that stabilized soon. The important thing is that the devices really obey automation rules even if the screen doesn’t always update immediately.

One thing that has been in the back of my mind as I’ve enjoyed the fabulous software and incredibly low prices of the Wyze hardware is whether these devices are secure. Recently on Security Now with Steve Gibson and Leo LaPorte, Steve gave his approval of the Wyze security model. The context was that Steve and Leo were talking about the fact that some vendors use cheap and low-power as an excuse to take security shortcuts in their design. ScooterX from the chatroom asked about Wyze. Leo and Steve then talked about how even though Wyze cameras are cheap and low-power, they do security correctly. Leo pointed out that Wyze uses TLS, AES 128-bit encryption to protect the security of the live stream and playback data, every device has its own secret key and cert so they can validate the security during a handshake.

Steve Gibson’s response was: “Wow, that’s what you want.” He went on to say, “Rip those D-Link suckers out by the roots. Yes Yes Yes!” I particularly liked Steve’s last line because that’s exactly what I did – I threw away my $100 D-Link camera and replaced it with the $20 Wyze Cam. If you’d like to hear Steve and Leo’s conversation for yourself, Bart gave us a link to the Security Now episode, starting at the exact section where they talked about this.

Remember I told you that I got in on the pre-orders for the Wyze Sense Starter Pack? This week they sent out an email to the “Early Access Group” inviting us to attend a virtual happy hour with the Wyze team. One of the big advantages of being retired is you can say yes to goofy ideas like this.

Mike, the product manager for Wyze Sense, held the event on YouTube and it was really fun. He dragged his laptop all around the company and introduced us to people. It was super dorky because it was just people working and this guy making them wave at us. Throughout the tour, he would answer questions we were typing which was great. At one point I demanded to see Max, the guy I interviewed at CES about some of their products, so Mike broke into a meeting just so Max had to wave at us.

Besides being good, goofy fun, we got a lot of early access information. It’s not private info now but it was news when they told us on Monday. Here’s the juicy information that got me excited.

The whole experience of watching this group of people working and willing to be so very open and transparent about their product development, letting us peek behind the curtain like that, made me like Wzye even more. They’ve got solid hardware, incredibly affordable prices, a good security model, intuitive products, and the team is open and accessible. What more could you want?

Check out all of their products at Wyze.com. You can’t get the Wyze Sense on Amazon yet, but you can get the Wyze Cam through my Amazon Affiliate Link if you like.