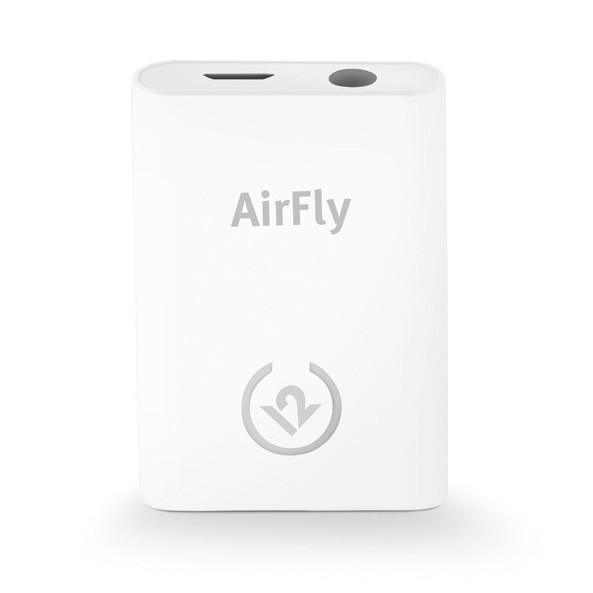 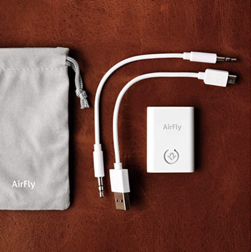 This is a review of the AirFly, made by TwelveSouth, an amazing little device. It is available at the TwelveSouth site or at Amazon — be sure to use Allison’s affiliate link, if you decide to shop there! At each place, the AirFly sells for $40.

The AirFly works with AirPods or other wireless earbuds or wireless headphones. There is a list of compatible devices on the TwelveSouth site.

The AirFly is tiny! It measures 1.8” tall, 1.3” wide, and .39” thick, weighing only 55oz. It comes with the headphone cable, USB charging cable, user guide, and carrying pouch. That pouch holds all of the other bits and pieces and measures only 2 3/4” x 4 5/8”, closing with a drawstring. It fits neatly into a pocket or a woman’s purse; it won’t weigh you down, either, as it weighs under 2oz.

The TwelveSouth people say that the range of the AirFly is up to 33 feet, and I believe it; I could hear even when I popped into the airline’s restroom.

So how does it work? I had bought it to use on an international flight from Las Vegas to Venice, and it was flawless. When the battery began to fizzle, I simply attached a portable charger and continued to listen with no problem at all. The charge lasts up to eight hours, and recharging takes only about two hours.

Pairing with my AirPods was a breeze. It’s a 3-step process:

There is only one little flaw that I found. On the flight home again, the port to plug in the AirFly was on the top of the seat’s arm, rather than on the entertainment screen. That meant that, when a clumsy passenger stumbled against my aisle seat, the plug on the headphone cable was bent, rendering the AirFly inoperable and leaving me wrestling with EarPods and their cord. I knew I could get a replacement cable somewhere, but I couldn’t find one that’s nice and short, as is the original one, so that it wouldn’t drag on the floor or be inconveniently in the way of the tray or something. The original cord is only about 7” from tip to tip. I’ve written to TwelveSouth for help and, at the time I’m writing this, am awaiting their reply. I do think that an improvement to the little cable might be to have one end finish in an L-shaped connector, rather than the straight one that is currently on both ends.

Update: After the weekend had passed, I heard from TwelveSouth, and they are replacing my cable at no charge, even though the damage was not their fault. Not only that, but the replacement cable is already in the mail to me. I really couldn’t ask for better service, which is all the more impressive when you consider that the support team is made up of only two people! Those two obviously have a great working relationship, as well as longevity in the company; Tracey has been there for almost eight years and Bridget for ten and a half. It shows!

All in all, I highly recommend the AirFly.