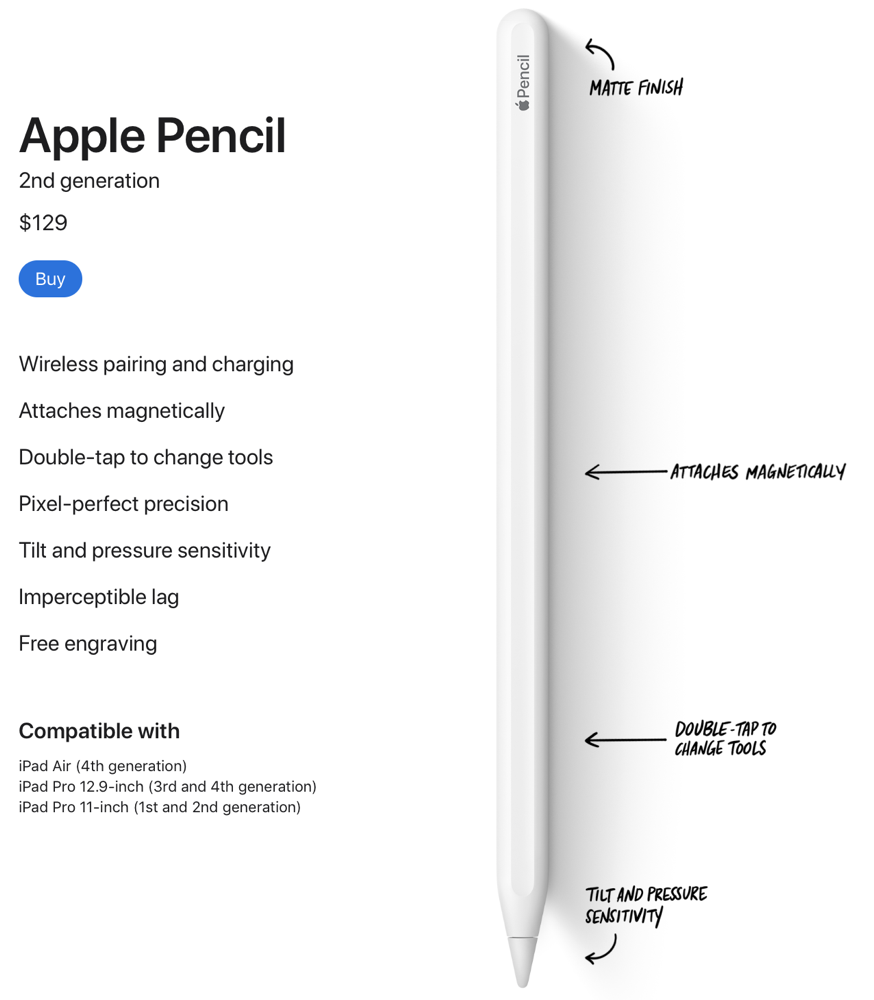 You know how sometimes you buy something and deep down you realize that maybe it really wasn’t as great as you thought it was but you justify it anyway because otherwise you’d realize that you did something dumb? I read about this very thing in the book “Mistakes Were Made, But Not By Me” by Carol Tavris and Elliot Aronson.

Because of this I often wonder whether something is as good as I’m pretending it to be. Take, for example, the Apple Pencil. It’s $129 and seems like a product most people could easily live without. People are crazy about the new Magic Keyboard for iPad because we don’t really want to write by hand, we want to type because it’s more efficient and there aren’t that many ways you can communicate in hand-written script anyway.

But let’s say you think you might want to write with a stylus, but $129 seems an excessive price for what’s probably going to be an occasional use item. I wrote an article in 2019 entitled One Crayon is Better Than Two Pencils in which I explained all of the virtues of the Logitech Crayon at $70. I still think the Crayon is a great device, but I can now say without hesitation that the Apple Pencil is way better, at least for me.

The reason I know this to be true is because I lost mine, and I was shocked by how much it annoyed me to not have it. I don’t lose things very often, because I put things in their place when I’m done with them, unlike some people I know who shall remain unnamed (Producer Steve edit: I trust that’s not me to whom you’re referring). I’m so good at keeping track of my things that I remember the very last thing I did with my Pencil.

I was sitting on the couch in our family room and I was starting to take notes for an article about how the new Scribble feature in iPadOS 14 isn’t really very good. I never got to finish the article because the next time I went to work on it, my Apple Pencil was gone. The cool part of the Apple Pencil 2 is that it sticks via a magnet to the top edge of the iPad. It works well but it does get knocked off inadvertently when I throw the iPad in my backpack. But I hadn’t gone anywhere!

I have become quite adept at crawling under the recliner portion of our couch without hurting myself, using my iPhone as a flashlight, because while I don’t lose things often, things are ALWAYS falling between the cushions. Usually, it’s my crochet hook but on occasion, it’s been a phone, but it happens a lot. I crawled under there, and under Steve’s recliner, and even under the other two recliners (it’s a really cool couch) without success.

I searched all around my bed because I do play with my iPad while sipping my first cup of coffee, but it wasn’t there either. Steve checked under the refrigerator, thinking one of our rotten cats might have stolen it and knocked it under there. He even looked under the seats in both cars, even though we hadn’t been anywhere since I’d lost it.

I paid a few dollars for an app called Bluetooth Finder, which is supposed to help you find missing Bluetooth devices. I think the app works because it found LOTS of Bluetooth devices in my house. In fact, it said I had a Tile in my house, which I didn’t believe, but I used its little meter to find where it thought it was, and sure enough I had one in my purse! I forgot all about them giving me one at CES.

I lived without my Apple Pencil for 2 weeks, trying to use the Logitech Crayon instead, and I actually hated the experience. I can finally articulate why the Apple Pencil is way better. It’s because it’s stuck to the iPad. Seriously. I have a need to do something and it’s just THERE. I remember I wanted to show Steve something that required the Pencil, and I realized my purse was on another level in the house so I had to go get it and by that time I’d lost his attention.

The other thing is that because it’s right there, it’s always fully charged. The battery on the Crayon is pretty good, but when it runs out, I have to find a Lightning cable and if it’s a USB-A cable, find a dongle so I can plug it into my iPad or Mac. That happened a couple of times and it was super annoying.

It surprised me how much I really use the Pencil too. I have told you before how I use it with Notability to write out my ideas when I’m programming because I can scribble in shorthand quickly before I lose a thought, and change colors for different ideas using red for dangerous things too.

I’m working on a new crocheted blanket and the pattern is giving me fits. It’s not a hard pattern but it has very slight changes so it’s hard to keep track of what part I’m doing. I wanted to use Notability with Pencil to hand-write out the instructions in a more structured way and then check off each step instead of having “do this 3 times” and “do that 4 times” where I couldn’t keep count.

I also have figured out a really good use for Apple Pencil and that’s for creating hand-written physical notes. Here’s the problem to be solved. Have you tried to write by hand lately? If you’re anything like me, your penmanship has atrophied over the years. I make so many mistakes, sending a simple thank you note looks like a 4-year-old wrote it. And totally forget about writing in a straight line!

So here’s the trick. Again using my trusty Notability, I set it for white paper with nicely-spaced lines on it. I choose a blue pen, which will later look like a real pen. I write my note, using the eraser as often as I use the pen. Sometimes I have an idea I wish I’d written earlier in the note. With Notability, I can use the lasso to select some handwriting and simply move it around.

When I’m done, I turn off the lines, put some pretty notepaper in my printer, and print it out. Now I have a physical letter to send to someone that looks like a normal hand-written note, and yet I couldn’t have made it look this good in a hundred years without the iPad and Apple Pencil. My mother-in-law has been the recipient of a few of my notes and she says she’s keeping them forever because hand-written notes are a lost art.

For two weeks I searched for my beloved Pencil. I even asked Twitter and Slack where they hid it and getting some great suggestions like Rick Cartwright’s where he suggested maybe it got stuck magnetically to something. I hadn’t thought of that! This meant yet another crawl under the recliners, running my hands all along the steel mechanisms feeling for my Pencil. And yet I didn’t find my Pencil.

I finally broke down and bought a new one, but at least I was able to find one in the Apple Refurb Store so that knocked $20 off the price. I got it today and I’m soooo happy about it! And, yes, I fully expect to find my original one tomorrow.

It’s like they say that the best camera is the one you have with you. I think the best stylus is the one that’s stuck to your iPad.