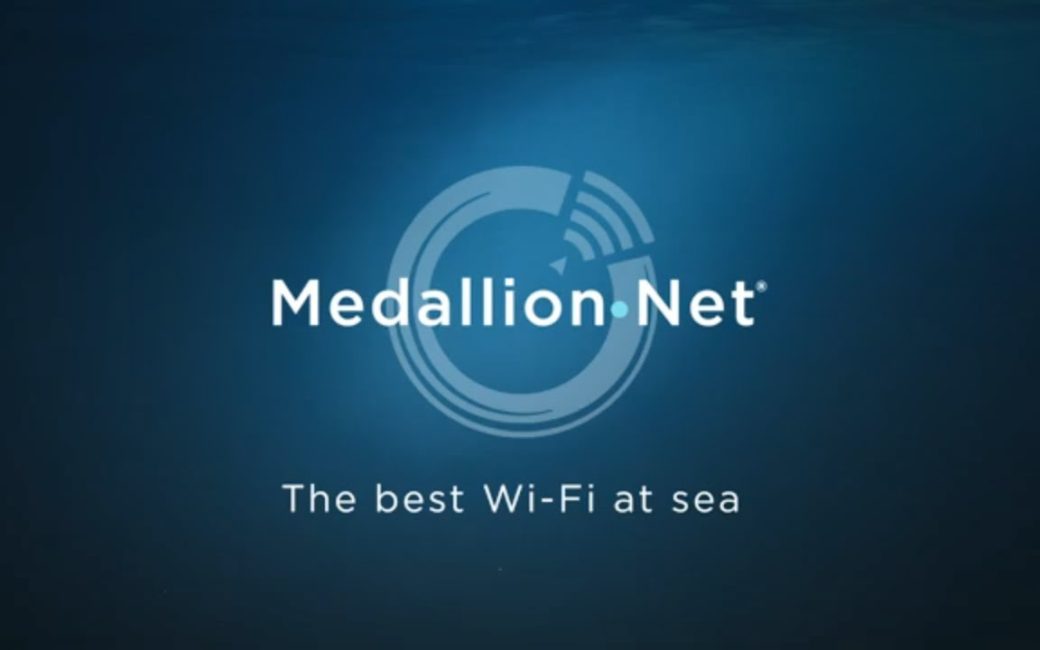 Hi folks! This is Charles Gousha, from the Silicon Valley Mac User Group.

When I was last here, for NosillaCast #592, I was preparing to head off to Alaska with Princess Cruises. It was a great vacation, hopping between the Alaskan islands with some of the best American glaciers you can see, but internet connections on a cruise ship have traditionally been notoriously slow. Even at the best of times, they offered dial-up speeds, and they charged by the minute. Allison tried this in 2012, had some choice words for them.

However, in the last 3 years, Princess Cruises has upgraded all of their ships with the new MedallionNet, and they now promise the “Best Wi-Fi at Sea”, so it feels like a great time to give this a test! And here I am, back from Alaska, having tested it out… and the experience is mixed.

First off, some background. Cruise ships spend most of their time FAR away from any cellular phone service, so they rely on satellites for their Internet connection. That has meant connecting to satellites in geostationary orbit — 22,000 miles up (36,000 kilometers for you non-Americans). That’s a long distance — 240ms travel time! Bandwidth can be reasonably fast for downstream data, like DirecTV, but absolutely horrible for upstream. Back in 2014, I was still seeing connection speeds of maybe 50K per second.

Enter the Princess Medallion Net. Or more importantly, SES Systems. This satellite company from Luxembourg has been flying television satellites for decades, and starting in 2012 they built a new system specifically for data use in remote regions. Their O3B satellites — short for “the Other 3 Billion people” — fly in Medium Earth Orbit — only 5000 miles, or 8000 kilometers, above us. That gives the system much lower latency, and modern satellite tech gives them much higher bandwidth, Down and Up. Every cruise company on the planet is signing up with them for shipboard internet, and Princess is the first cruise line to outfit their entire fleet with its service.

But there’s a problem. The satellites have a lower orbit, so they are moving across the sky. They’re not streaking by as fast as Elon Musk’s Starlink system, but they do need about 20 satellites to provide global coverage. The cruise ship maintains a link to 2-3 satellites at any one time to keep a continuous signal.

…and that wonderful new satellite system has a geographic limit. The satellites’ orbit only goes up to about 50 degrees of latitude — a little bit north of Vancouver. Alaska starts around 55 degrees, so the satellites, while they can still be seen from the low reaches, are pretty low to the horizon.

Time to test it out.

Overall it’s a very solid connection. The service is (almost) always up. Princess isn’t worried about low bandwidth, so cost is measured by the day instead of by the minute. No more worries about having to log on, get your stuff done, and log off as quickly as possible. Just connect and leave it! Email and Slack messages come in whenever. Read them or post them at your convenience.

Pricing is reasonable. $10-20 per day, depending on how many devices you want to connect at one time. There’s a growing trend of cruises bundling internet service with drinks and other benefits into one cost-effective package, so it’s easy to just get the package and forget about it.

But the speed was disappointing. “Best Internet at Sea” gave me a pretty high expectation for it! I measured first off the coast of Canada, in the open ocean. Water in every direction as far as the eye could see, so I had an unobstructed connection. Speeds came at a decent 35 Megabits downstream, and about 3 and a half Megabits upstream. Fairly reasonable, and well within the needed amount for web pages or email. But video was pushing things. A visit to YouTube got 480p resolution at best.

My second measurement was just inside the glacial fjords of Alaska, with mountains on both sides of the ship. The mountains are blocking the good satellites, pushing the connection back to the old geostationary ones. As a result, I got a download speed of less than 3 Megabits down, and only 1 Megabit up! Adequate for basic internet needs, but nothing that could possibly handle video streaming. YouTube tried valiantly but had long pauses for rebuffering every 10 to 20 seconds or so. Zoom conferencing wouldn’t even connect! Not exactly a positive experience there… but the view of the mountains was really pretty!

I did get one very pleasant surprise. Regular phone calls onboard ship use the old Maritime Cell phone connection, and are hideously expensive! But my cell phone carrier uses IP service when available, and Medallion Net counts. Given the slower speeds I was seeing, I expected some problem with that. There weren’t any. I made a lot of calls on that trip, and they were all perfect. No glitches, no dropouts… and no $200 phone bill at the end of the trip! This is great! If at all possible, make certain on your trip that your cell phone plan can use a WiFi connection and turn the cell part off entirely. Your wallet will thank you.

So where does this leave the other cruise lines? They’re getting there. Carnival Cruises, Royal Caribbean, and Norwegian Cruise Lines are all installing similar systems, but it’s going to be a few years before all of the ships are upgraded. In the meantime, whether you end up with a per-day charge or per-minute charge will depend very much on what cruise line you’re using, and what ship you’re on.

For extra fun, SES is upgrading to their new O3b mPower satellites, which promise to offer gigabit speeds to thousands of customers simultaneously. 5G speeds for everyone! Princess is promising YouTube, Netflix, and Zoom calls to all of the passengers at once! Video conferencing from the middle of the Pacific! But not yet. The first of the new generation launch next month, and they won’t be online until the end of 2022. I guess we’ll just have to wait a little longer.

Don’t get me wrong. The service now is a LOT better than what we were used to even five years ago! And for people like us that live online, this is a great way to get outdoors while not tearing your hair out about when you’ll be back in range of civilization. But the grand advertisements about super-fast speeds in the age of modern social media aren’t true yet. Probably as well. I should put the computer down and go watch the pretty scenery!

I chatted a little with Wally Cherwinski, and he was surprised that I didn’t get as good a service as he did on his own trips. It turns out Wally cruised in the Caribbean — well within the satellite coverage area. So, yeah, service should be better there. But there’s only one way to be sure. Time to get another cruise! My wife and I will sail down to Mexico in November. I’ll get the full experience, and with luck, I’ll video chat with someone while I’m out.

Sounds like I’m going to need to file a third report. I’ll see you all in December!

4 thoughts on “MedallionNet® on Princess Cruises – “The Best WiFi at Sea”? – by Charles Gousha”