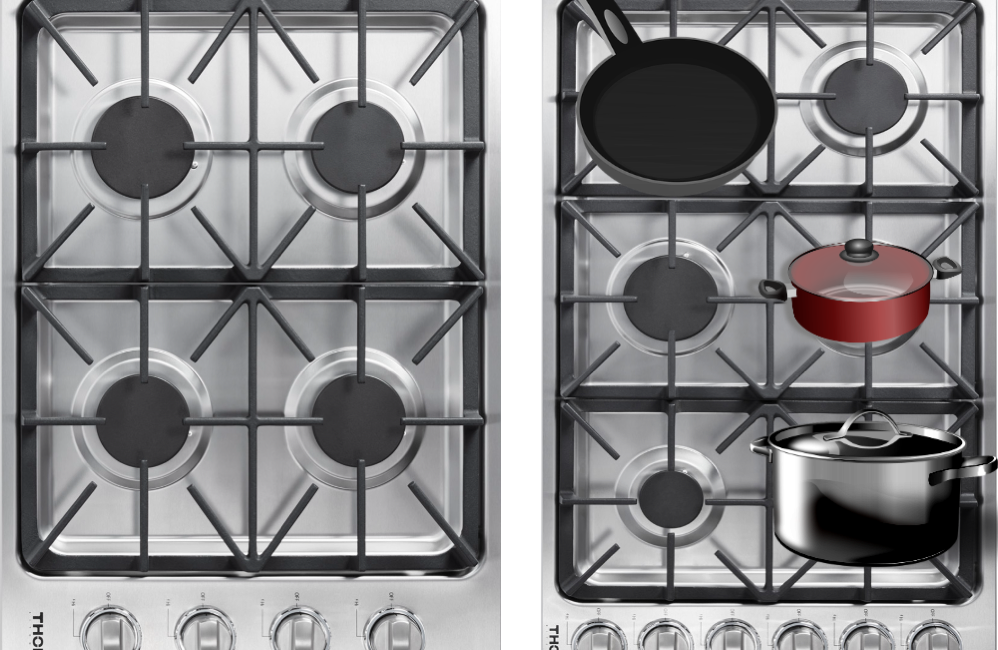 I’d like you to imagine a stove with four burners. Two on the left and two on the right.

In the morning, you want to make a fried egg, so you put your little frying pan on the front right burner. At lunch, you want to make soup and a couple of grilled cheese sandwiches. You put a medium-size pot on the front right for the soup, and a big pan for the grilled cheese on the front left. Now it’s dinner time and it’s all hands on deck for your family. You’ve got broccolini in a medium pot, you’ve got some grilled onions going in a small frying pan, you’re making pasta in a large pot, and maybe grilling some chicken in a medium pan.

Everything is dandy and you can move the pans and pots around if someone is left-handed or if you need to stir something so it can be moved to the front. You’ve got all your pots and pans organized so you always know where they are to be ready for the right cooking at the right time. Life is good.

Now imagine a brand new, fancy stove. It actually allows you to work with six things at once instead of four. But all six aren’t open to be used with any pot or pan.

While technically you only have one fewer open burner than you had in the open cooktop, it’s more restrictive and less flexible for the different cooking scenarios.

While this would be a very frustrating cooktop for you, a significant percentage of the population really loves the dedicated burners and they are really tired of having to lug the pots and pans out of the cabinet. Sometimes they even lose their pots and pans. They like having the dedicated pots and pans in the same place at all times so they can’t lose them.

Do you see where I’m going with this? The new MacBooks Pro have six ports on them instead of four, but three of the six are dedicated to one task and one task only. The MagSafe connector in the back left is fantastic and charges the laptop at high speed, but it’s always in the back left. While technically you can charge on the right with the one USB-C port, it won’t be as fast as the MagSafe on the left.

Even if you haven’t needed an HDMI connector in years, you still have one. Never use your big-girl camera anymore? You’re getting an SD card slot anyway. Maybe you use both of these, but you’ve already invested in docks and dongles so you had great flexibility to make every port be whatever you wanted it to be.

But there appear to be more people who lose dongles and hate to “lug” them around than people who like flexibility. I’m glad they are happy and this new design is the answer to all of their retro desires.

I’ll also be fine with this new redesign but I sure liked my flexible four-burner stove and I never lost a single pot or pan in the five years I used it.

3 thoughts on “What if Your Stove Had Dedicated Burners?”