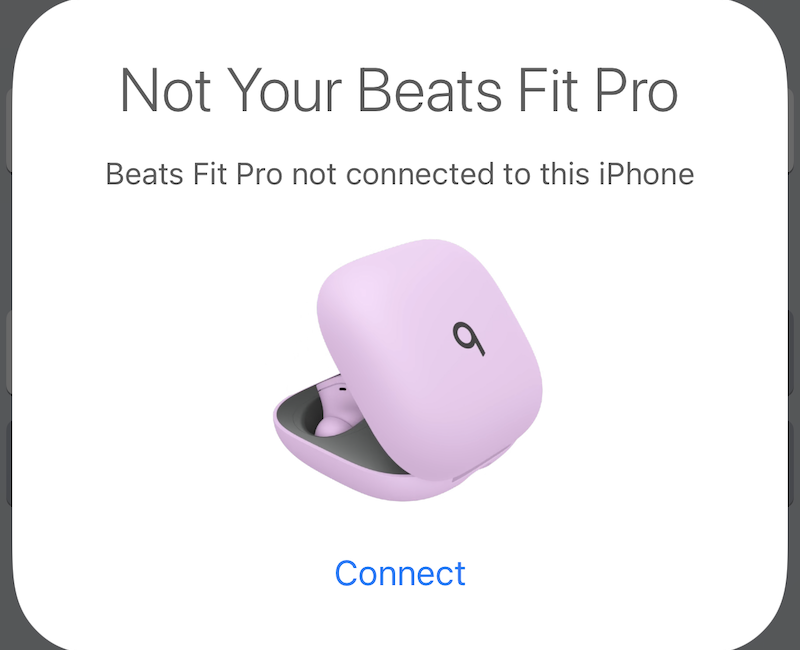 I told you last week that I’d replaced my AirPods with Beats Fit Pro. I did this because the AirPods Pro squirt out of my ears, and the AirPods Gen 2 don’t charge properly and that I lost one before I could execute yet another warranty repair.

I wanted to give an update on the situation in my ears. When I wrote my review of the Beats Fit Pro, I hadn’t yet run in them, I’d only walked and done chores while wearing them.

I’ve been for a couple of runs now and the right one does have a tendency to work its way out. It’s easy enough to kind of twist it back in to get the ear hook where it belongs, but it’s not staying in quite as well as I first said. It’s a lot easier to twist back in than the AirPods Pro were, so I’m still happier with the Beats.

I’ve also noticed sometimes that they hurt a little bit after wearing them for a long time, and yet other times I can wear them for hours without discomfort. I need to do some more scientific experiments to determine if there’s a position in which they just feel better to my ears.

The other day I was power washing my neighbor’s driveway (he was in the hospital so he couldn’t stop me). I was listening to a podcast and I realized that it didn’t sound like noise cancellation was enabled. I did a long press to turn it on, and I have to say it was an amazing difference for such a loud and continuous sound. I was very pleased and impressed. I could have sworn that the AirPods Pro keep noise cancellation enabled if I had it on during the previous usage, but the Beats Fit Pro definitely do not. They always default noise cancellation to off.

I also mentioned that Steve has the Beats Powerbeats Pro that have the wraparound hooks for the outside of your ears. The other day he wanted to watch The Expanse while I was watching another show in an adjacent room.

A show like The Expanse isn’t any fun without the volume way up so he decided to use his Powerbeats Pro to connect to the Apple TV over Bluetooth. We’re not sure why, but the Apple TV simply did not see them. He tried my Beats Fit Pro and the Apple TV immediately saw them and connected. That let him try out Spatial Audio we don’t think is supported on the Powerbeats Pro. He enjoyed the experience.

Now that he’d tried them for TV watching, he thought it might be fun to try them for running. There were a few things to note.

He ran the fit test, and with small, medium and large tips, none of them would give him a successful fit test. He doesn’t have a strong interest in noise cancellation so he chose the medium tips for comfort. His analysis after the run was that they felt good and most importantly stayed in his ears just fine.

There was one funny thing when he was doing the setup with his iPhone to connect to my Beats Fit Pro. You know how when you open a set of AirPods or Beats, sometimes, if you’re lucky, a graphic slides up from the bottom showing you the headphones and their battery status?

When he opened my Beats Fit Pro next to his phone, the graphic said, “Not Your Beats Fit Pro”! I thought that was hilarious. Especially after last week when I said buying them in Stone Purple ensured he would never steal mine!

After I posted the article about the Beats Fit Pro and how much I liked them, I got an email from Gazmaz saying that he had been unable to find them in Europe. A couple of days later, I heard on MacOSKen that Apple had just announced that they would be bringing Beats Fit Pro to Europe, Japan, and Canada in late January.

Last week I also told you about how last October, just a few months after I bought another pair of gen 2 AirPods, they started to fail just like the first pair. I was going to get a replacement through AppleCare, but before I could I lost one of them. I was so disheartened by the process the last time I had to replace an AirPod, that I had been procrastinating for two months about getting it replaced.

This week I decided to spend the time and energy going back to Apple to get the replacement so that if it did fail again, I could get it replaced again and again and again.

I called Apple and in the automated phone tree pushed some buttons. After 28 minutes, I was connected to Kevin, who immediately after picking up said that he was in tech support and couldn’t help me, and that he’d connect me to Sales. Fine. When Sales connected, Alicia said that she couldn’t help me, the only way I could get help was to go through AppleCare.

I asked her how she would have directed me if I didn’t have AppleCare. She told me that you simply cannot buy one AirPod without AppleCare! She said that to buy one, you have to return the case and the remaining AirPod, and then they ship you a whole new set. I didn’t ask how much that cost, but I did say, “You do realize how dumb this sounds that you can’t buy a replacement, right?” And she said, “Yeah, I hear it.”

So keep that in mind that if you ever buy AirPods and worry you might lose one, BUY APPLECARE.

Please read this newer post on the subject – Julia was 100% wrong: AirPods & AppleCare – Apple Just Doesn’t Like Me

I was then transferred to AppleCare where Julia asked me if I’d tried to find the lost AirPod. Seriously. “No, I’m a moron, that never occurred to me!” The number of questions I had to answer was ridiculous. I wanted to hand her the stupid-expensive $79 to get an AirPod, but it was like I was applying to adopt a human it was so messy. She asked me one super-invasive question, I wish I could remember what it was, and I told her to write down anything she wanted because I wasn’t going to answer it.

It took me 52 minutes to give Apple money to buy a replacement, leaving me feeling abused and angry.

I got the replacement in two days, which was nice. I put it in the case and charged it for several hours. I connected to the AirPods, and the new left AirPod had no sound. I put them back in the case, told my phone to forget them, reconnected, took them out, charged them longer, no joy. Gave them a time out for a few days, and just today tried them again, and the left AirPod worked.

But for a brief moment, I saw a popup that said the left AirPod was at 2%. Are. You. Kidding. Me.

I’ve put them back in the case, and over hours and hours I’ve got the left AirPod up to 100%. I have zero expectation that this new AirPod will be any better than the previous two. I have every expectation that I will be back with AppleCare by the next time I give you an update on this story.

That does mean that I’ll have to start using the regular AirPods again, which won’t be a bad thing because I like them so much. But when they fail yet again, you may be able to hear my wail of anguish from wherever you live.