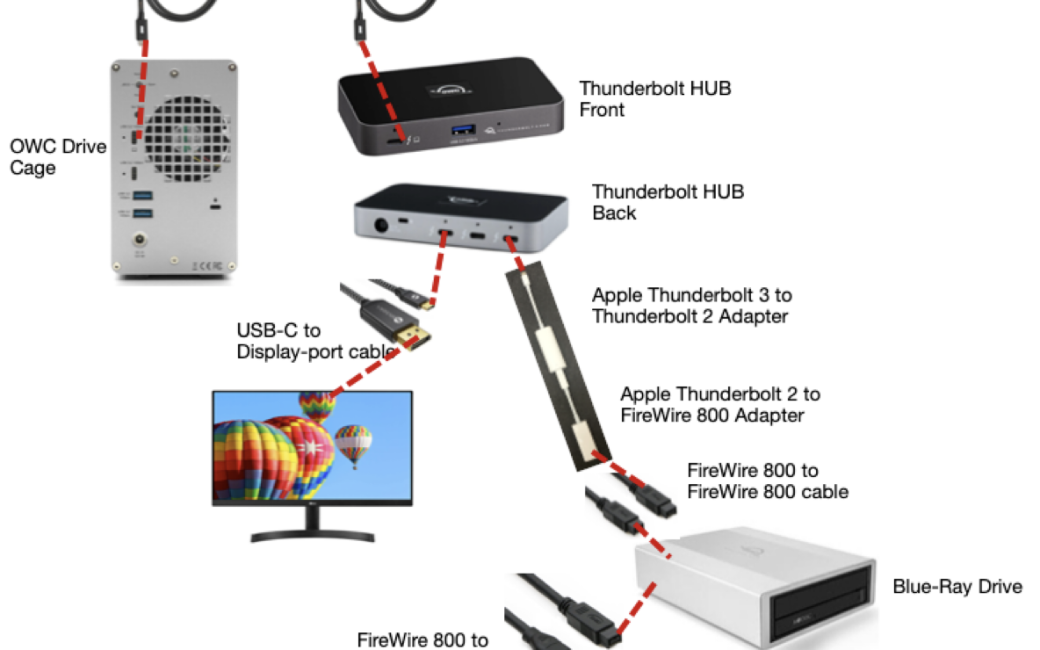 Let’s start with our problem to be solved.

I find myself wanting or needing to use discs of different types, CD, DVD, or Blu-ray on my M1 Mac mini. This isn’t an issue as I have a few USB DVD drives and even two USB Blu-ray drives. The issue I have found is that the slim-line DVD or Blu-ray drives, even the one I have that is made by Apple, are okay at reading discs but not great. I am not sure why this is the case but many of the newer Blu-ray drives that I have tried do not even read CDs very well.

For example, I have been working with some CDs recently that have been used over the years so they are not perfect, they have scratches or blemishes on them. I cannot blame the CDs, it isn’t the CD’s fault that they have been used and now has some blemishes, I too am a few years older and have more blemishes than I once did. Using these blemished discs in the USB slim laptop-style drives that I have has been interesting, to say the least. The drives try to read the discs but sometimes skip or even the drives may give up altogether on trying to even read the discs sometimes causing the application that I am using or even the computer to stop being responsive. I think that this requires more testing.

As I have stated, the blemished discs just do not read well in the slim laptop-style USB DVD or newer Blu-ray drives that I have. I do have some older external full-size DVD and Blue-ray drives, I actually have four or five of them, and using one or two of them to conduct some testing I found that these older full-size drives actually read many of the blemished discs without any issue at all, which is much better than the newer drives that I have.

Now looking at each of these old drives, they obviously have a data cable so each drive would or could be plugged into the M1 Mac mini if I want to use USB, and that was fine for my testing but the drives have the following connections, the Blue-ray drive I would like to use has USB-3 & FireWire 800, DVD-1 drive is USB-2 & FireWire and DVD-2 is FireWire only. Did you notice what the common interface was on all of these older devices? Have any of you used a USB CD or DVD drive and then used it plugged into a FireWire or FireWire 800 port?

Well I do, I have to admit that I did lots of testing and comparing external devices using USB and FireWire as well as FireWire 800. As you may or may not recall, FireWire devices used to cost more than USB devices back in the day, do any of you know why that was? Well, part of that extra cost was due to the FireWire chipset that was in the device, unlike USB devices that would use the system CPU in your computer for processing the data, FireWire devices used minimal computer CPU because they had some processing capability built into the FireWire chipset. The other neat thing about FireWire was the ability to daisy chain FireWire devices, this didn’t work well for those of you who used FireWire on Windows computers but it worked VERY well on Mac computers.

At one time I had four external hard drives and three external DVD drives all plugged into my old Mac mini using one FireWire 800 cable connection, it worked flawlessly for me for years and was quite fast, it actually tested faster for me than when I plugged in the USB-3 drives when I was copying large files. The FireWire connection was also by-directional, meaning that I could both read and write files from different devices on the FireWire chain without noticing much speed loss.

Anyway I digress, that is enough about how I really liked FireWire and FireWire 800 devices and was VERY sad to see them go but with the M1 Mac mini now we have only two USB 3.1 Gen 2 ports and two Thunderbolt / USB 4 ports.

Thunderbolt is fast and like FireWire can sometimes support daisy-chaining devices. On my M1 Mac mini currently, I have one of my displays plugged into let’s call it the Thunderbolt / USB-4 port 1, and my OWC Mercury Elite Pro Dual with the 3-Port hub plugged into, let’s call it port 2. You can listen to my review of the OWC Mercury Elite with 3-Port hub on NosillaCast episode #837 or read the block post from May 18, 2021, should you be interested, I continue to use and enjoy this external drive cage.

So part of the problem to be solved is that I would like to use my old external DVD and Blu-ray drives as well as the old FireWire-only DVD drives that I have. The easiest way to do this would be to plug in these devices just like I did in the past, using a FireWire chain connection so that ALL the drives could be plugged in using just one port on my M1 Mac mini.

How can this be done? How about we look for an adapter?

The M1 Mac mini does have two Thunderbolt / USB 4 ports that could be used if we found the correct adapter.

Apple makes a Thunderbolt to FireWire 800 adapter but it uses the older Thunderbolt 2 mini-display port-looking plug.

Now for those who have been paying close attention, have you discovered the new problem that needs to be solved?

The M1 Mac mini only has the two Thunderbolt / USB-4 ports but I already have my monitor which can only terminate a Thunderbolt chain, and the external drive cage plugged into the second Thunderbolt port.

I would like to say that I had the money to buy a new fancy monitor, like the Samsung TU87F which supports Thunderbolt pass-through but I just couldn’t justify the $630+ monitor.

What I decided to try was a less expensive Thunderbolt hub.

I found three to look at:

The CalDigit has four Thunderbolt ports, a connection to the computer port, and four USB-A 3.2 Gen2 ports, but it is $80.99 more than the cheapest option.

The Plugable device has three Thunderbolt ports and a connection to the computer port.

The OWC device has Three Thunderbolt ports, the connection to the computer port as well as a single USB-A 3.2 Gen2 port.

So the question is which one of these hubs should I choose?

Well, the Apple adapters that I already purchased were not inconsequential, the Thunderbolt to FireWire adapter was $29.00, and the Thunderbolt 3 to Thunderbolt 2 adapter was $49.00, so I have already invested $78.00 into this project. Taking that into account I decided to go ahead and just select the OWC Thunderbolt HUB mainly because it was the cheapest and if I am honest I have had excellent luck and great service from OWC in the past.

Unboxing the OWC Hub, when you open the box you will see the Hub device cradled inside black colored cardboard, placing the hub in the middle of the box with two finger openings so that the hub can easily be lifted out of the box. The hub comes inside a size-fitting plastic bag without any tape or sticky stuff to get in the way, YES I like it when items come this way.

I hate having to use a knife or something to cut tape or even worse peel the tape off to only have sticky residue left on the bag. 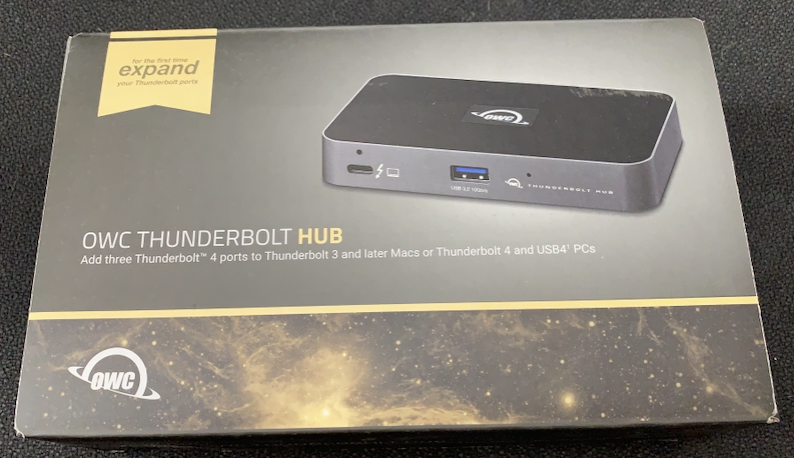 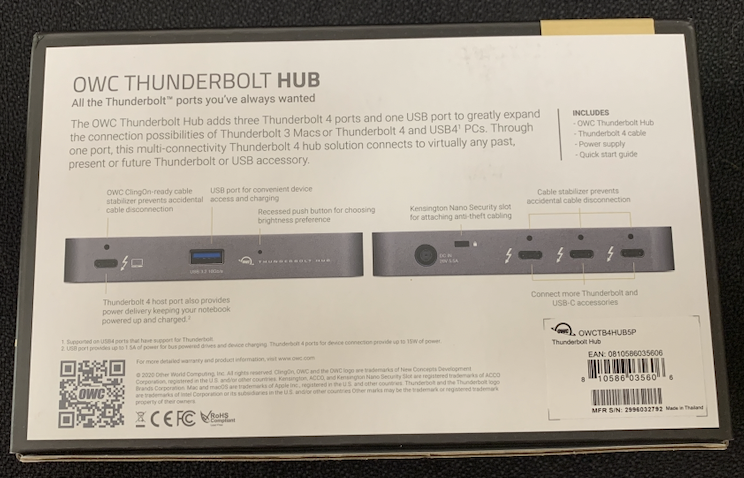 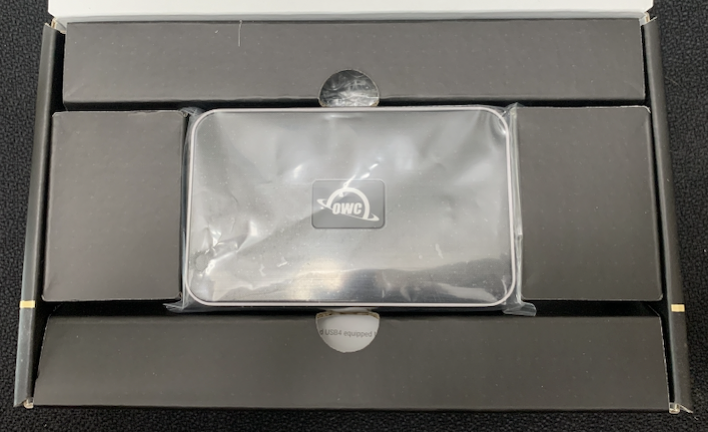 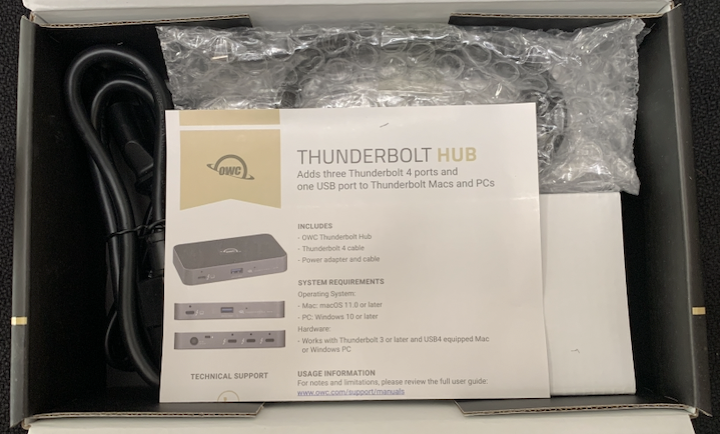 Lifting the black cardboard out of the box reveals a quick start leaflet, power adapter with standard computer power cord, a NEMA 6-15p to C13 as I am located in the United States, and a Thunderbolt 4 cable, approximately 3’ long.

No software or driver download was necessary, I plugged in the hub and it worked as expected.

Just like I did for the dongle testing, I unplugged my second monitor from the back of my M1 Mac mini, freeing up one of the Thunderbolt ports, and used the now open port for the included Thunderbolt 4 cable to plug into the Thunderbolt HUB computer connection port. I then plugged my second monitor into, let’s call it port 1, on the OWC Thunderbolt HUB, and the monitor worked immediately! I then picked up the Apple double dongle for my firewire connection and plugged it into the OWC HUB, I powered on the three external Blu-ray and DVD drives and they all worked without issue! (See Appendix A for Connection Diagram)

I am happy to report that everything worked as I was hoping that it would and I even have one available empty Thunderbolt port on the OWC HUB should I want or need to plug something else in using Thunderbolt.

Well, all’s well that ends well or that is what someone once said, but I do think it is interesting that we now live in a dongle, or in my case a multi-dongle world.

And last, of all, I would like to encourage you all to “Stay Subscribed”.