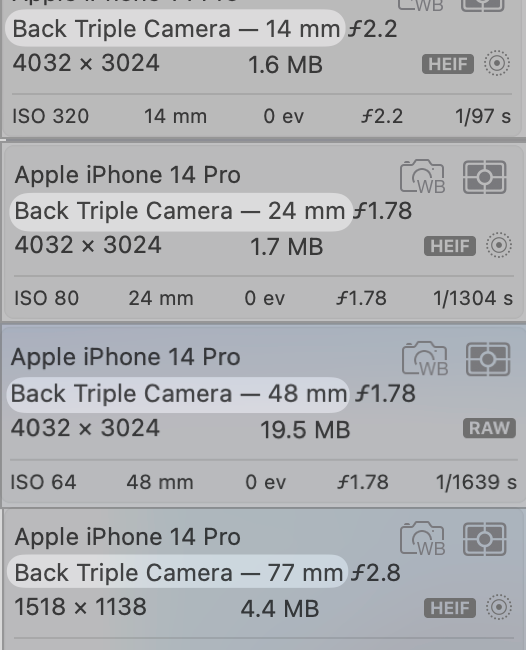 Let’s be honest with each other. We don’t buy cell phones that happen to have cameras. We buy cameras that happen to come on cell phones. In my personal observation, the biggest driver on why people buy a new phone is whether the cameras are better than the model they currently own.

The iPhone 14 Pro has 3 lenses on the back, just like the iPhone 13 Pro did, but it actually has 4 cameras. I’m going to talk more about how that is done at a later date. Today I’d like to talk about how, in Apple Photos, it’s much harder with the 14 Pro to figure out which camera you used to capture an image. If that’s not at all important to you, then you can skip past this article, but if you’d like to know more, stick with me.

The info pane in Apple Photos for both macOS and iOS reveals information about how the image was captured. This information is called the EXIF data (Exchangeable Image File Format) amongst camera nerds.

For images taken with the iPhone 13 Pro’s “.5” camera, Apple will label this image with “Ultra Wide Camera”. It will also tell you the focal length (13mm) and aperture size (f/1.8). You don’t have to worry your pretty little head about those numbers to know which camera took the photo because the image is clearly labeled as using the Ultra Wide Camera.

Likewise, an image taken with the iPhone 13 Pro’s 1X camera will be clearly labeled “Wide Camera”.

And finally, if you tap on “3” to take a photo with your iPhone 13 Pro, that image will be labeled “Telephoto Camera”.

All of that makes sense. I think even if we’re not super nerds on this subject, we can tell which one of these images was created by pushing which button on our camera app. Now let’s switch gears to what happens with the iPhone 14 Pro’s cameras.

On iPhone 14 Pro, the Camera app on iOS now gives us four options instead of three. They are “.5”, “1X”, “2”, and “3”. Again I’m baffled why they don’t give us an X on all four options or none. I’m going to have to get over that. But when you open the Info panel in Apple Photos, images taken by the four different cameras are all labeled with the same name: “Back Triple Camera”.

The clue as to which camera took the photo is buried in the focal length, which does change depending on the camera. In order to learn which one is which, let’s take a look at the information Apple gives us on the iPhone 14 Pro Tech Specs page.

I compiled them into a little table for reference along with a bit of other information. I could read out all the numbers to you to make your head spin, but instead, I’m going to teach you how to tell which camera took an image but only by memorizing one number.

The Main (aka Wide, aka 1X) camera has a focal length of 24mm. That’s it; that’s all you have to memorize. From there you can derive all of the others. The only thing that might throw you here is that the math is inexact. I’ll explain as we go through them.

I wish the numbers were exact multipliers, but even Apple is inconsistent. In the Info window for an Ultra Wide image, it says 14mm, but if you look at Apple’s tech spec page it says Ultra Wide is 13mm, and of course, the math says it should be 12mm. I guess math is really more of a guideline here.

If you have trouble remembering the one number or calculating all of the others, your iPhone’s camera will actually tell you the numbers. If you tap and hold on any one of the options (.5, 1X, 2, or 3) you’ll get the little dial to change the zoom level. If you look very carefully, the focal lengths are actually printed right under the zoom levels.

It’s tiny print, so you might need to fetch your glasses or a teenager to read it to you, but it’s there. Oh, and to make it just a smidge more challenging, they only print 3 of the 4 at a time, one is always missing and it depends on how you rotate the dial to change which one is missing.

The bottom line is that if you want to know which camera took a given photo, look in the info window for 24 mm. If you find it, that’s the Main 1X camera. See roughly half of 24mm? That’s the .5X Ultra Wide camera. See double 24mm? Then it was taken at 2X. See some number vaguely close to triple that? It’s your 3X Telephoto Camera. I’m sure glad I was able to clarify all of this for you, and here’s hoping Apple puts the real names back in so no one has to do math to figure out which camera they used!!!

I think there’s hope on that front because, in iOS 16, iPhone 14 Pro images in the Photos app clearly say “Telephoto Camera”, “Main Camera”, and “Ultra Wide Camera”. I verified that this clarity is not available on iOS 15 and iPadOS 15. Fingers crossed that macOS Ventura and iPadOS 16 bring it back to us. Until then, have fun doing the math!