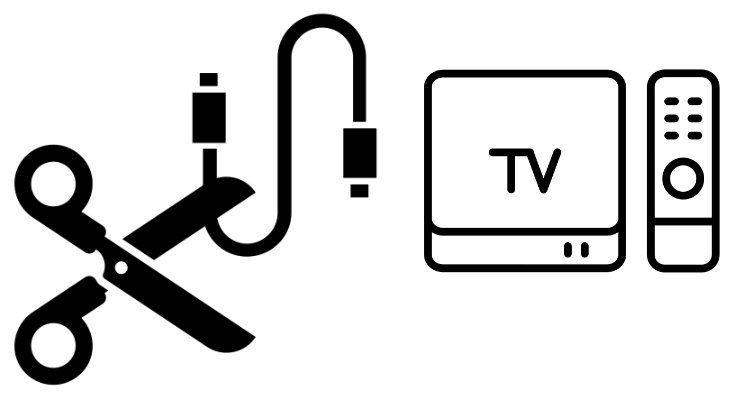 I feel like Steve and I have made fire, but it’s because we’ve done something probably 85% of you have already done. We finally cut the cord and canceled our cable TV service from our ISP Frontier. I want to chat about it because there are a few interesting points I didn’t appreciate before we went through the process.

We were paying Frontier for FiOS Internet, a landline telephone (I know, we’re old), and for TV. Outside of Frontier we also subscribe to the major streaming services, including Hulu, Paramount+ for Star Trek, Amazon, Netflix, HBO Max, and probably a few more I can’t remember.

While my TV watching is pretty much only the streaming services, Steve likes to watch the news, along with a few documentary shows here and there. We’ve been loyal TiVo subscribers for ages to record our shows. We had a primary TiVo plus a smattering of TiVo minis sprinkled about the house so all shows were available in every room with a TV. Even though the TiVo user interface hadn’t seen much change in a long time, it was reliable and made sense to us.

The First Time I Tried to Cut the Cord

When people first started talking about cutting the cord, they talked about using an antenna. This sounded cool because the major network channels actually have less compression than if you use cable (or FiOS in my case) for the signal, so you get a higher-quality picture.

We have a two-story house with a clay tile roof that’s very fragile, so there was no way we were going up a 30-foot ladder to put up a rooftop antenna. I bought one of the recommended ones to mount on walls inside your house and we tried it out.

It lasted about 3 days before Steve was ready to throw it out. While we could get a good signal, it would somehow lose the signal and we’d have to fiddle with it. Fiddly was not exactly what we were looking for.

Over the last few years, watching the Cord Killers podcast with Tom Merritt and Brian Brushwood at CordKillers.com I’ve learned a lot about how to watch TV without “cable” and over the years I’ve made suggestions to Steve but he wasn’t interested. When our friend Pat Dengler tried a couple of them out he still wasn’t ready to try it out.

And Then Ron Cut the Cord

Our buddy Ron, who’s been on the show a few times, comes over every Friday night and one week he told us he was cutting the cord. This was interesting because he also had Frontier FiOS, TV, and landline phone service. He said he saved an enormous amount of money switching to YouTube TV and that Frontier actually helped him do it. I was dubious that it would work for us and I didn’t push Steve to consider it.

But then Ron got a new TV and he asked Steve to come over to help him mount it. When they were done getting it set up, Ron showed Steve YouTube TV. When Steve came home, he said he was ready to give it a try. I was shocked!

Ron had demonstrated for him how easy it is to record shows and that he could record as many simultaneous shows as he could currently using TiVo. He showed him how to find channels and it all worked as expected. It was different than TiVo, but not bad different.

But Would it Save Us Money?

I wasn’t sold yet because I didn’t believe it would actually save us that much money. Ron was convincing, but he hadn’t spent the time every darn year “negotiating” with Frontier when they tried to raise the bill and fighting them till they agreed to bring it back down. Some years I actually finished the negotiations paying less than when I started.

I had negotiated my bill with Frontier down to $155 per month for the three services, while Ron was getting close to $200 per month. I called Frontier to chat about what my savings might be. The first thing I found out was that in less than a month, my clever negotiation from the last time I’d called was going to run out, and our bill was about to go up to $190/month. Yikes!

With that as our starting point, my new friend at Frontier immediately told me that she could give me a $10/month discount coupon for the first year of YouTube TV if I quit paying Frontier for TV service. YouTube TV is normally $65/month, but I’m going to be paying $55/month for the next year.

I have no explanation for why they paid me to leave. I know I was an annoying customer because I called them every time they tried to raise our rate, but they were still making bank on us. I’m also sure they get some sort of deal from Alphabet for converting us, but the math just doesn’t work out.

As Ron had explained to me, the reason cancelling TV service saves so much money is that virtually all those weird, annoying fees disappear. Maybe you don’t have this kind of nonsense in your country, but we were paying for a VoIP Administrative Fee, and a Sports/Broadcast TV Fee, and a Cable Card fee. The one that really bothered me was the Sports fee since I watch exactly zero sports.

Another item in the inexplicable discount category is that they gave me a $10/month loyalty credit for the next year. That’s right, for leaving they paid me $10/month. Since my new rate for FiOS was going to be higher than new customers could get, they also gave me a $10/month new subscriber discount for the next year. In case it’s become confusing, Frontier saved me $30/month on buying YouTube TV and paying Frontier for FiOS. When I canceled TV service, my bill went from $190/month down to $46/month.

I told the woman on the phone that I was glad she explained the two credits and that they were only for a year. I said I won’t call and holler at them in a year when the price goes up. She responded, “No, you won’t. But you will call us and ask us what promotions are available to you!”

There was one more item in the savings column. I canceled our TiVo subscription which saved another $150 per year.

The grand total savings for the first year will be … drum roll please … $1217!!! We were paying over a thousand dollars a year for TELEVISION. And that doesn’t even count all of the streaming services we pay for!

But What About that FiOS?

The financial benefit takes my breath away, but something else happened that sweetened the deal even further. Ron told me to ask for this but I can’t believe they gave it to me. We had 100 Mbps symmetrical FiOS Internet when I started the conversation. But when I canceled our TV service, they upgraded us to 500 Mbps symmetrical … for free.

The bottom line is that we saved $1200 per year, we got our Internet speed increased by a factor of 5, and we still get to watch all of the same TV we were paying for before.

We’ve also simplified our environment. We watch YouTube TV through our Apple TVs that were already in place at all our TVs which means we were able to get rid of a TiVo Edge, a TiVo Mini VOX, and 3 TiVo Minis. Steve is selling the TiVos on eBay as we speak!

The only complaint we have with YouTube TV is that it’s much harder to precisely scroll in a show to skip commercials using the Apple TV remote. There also seems to be an issue restarting YouTube TV if it was the last app we ran on the Apple TV. We have to restart the app sometimes three times before it will start up. These are small annoyances, and a small price to pay for $1200 annual savings and a 5X increase in Internet speeds!

I’m sure you’re all smiling knowingly at us because you’ve been saving this money for years, but we feel like we have made FIRE!

7 thoughts on “The Sheridans Finally Cut the Cord”