My birthday was last week so I asked Steve to get me something to mount my iPhone to the bike so I could use some of those cool apps Kirschen talked about last week. That did, of course, mean it was time to drag my bike out of the shed and dust it off from last winter. Yeah, the winters here in California are pretty tough, it can dip down below 60 from time to time. 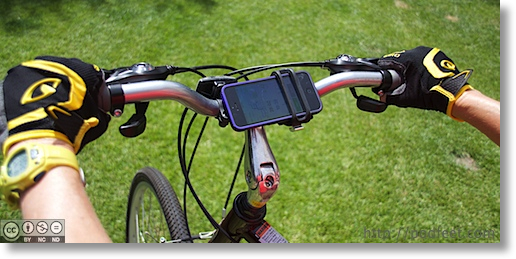 Anyway, I suggested to Steve that he should ask Kirschen for advice on a bike mount. He did, and he gave it to me, but for my needs I’m afraid it was overkill. This mount was for REAL weather. It had a case with rubber plugs for the connectors to keep out rain and a screen protector, and then a permanent mount to attach to the bike. It was sort of a sledge hammer when I needed a small ball peen hammer. I’m sure it’s perfect for Kirschen because she’s a very serious rider, going out in all kinds of silly weather. I’m more of a “If it’s over 70 can I make it down to the beach” kind of rider. 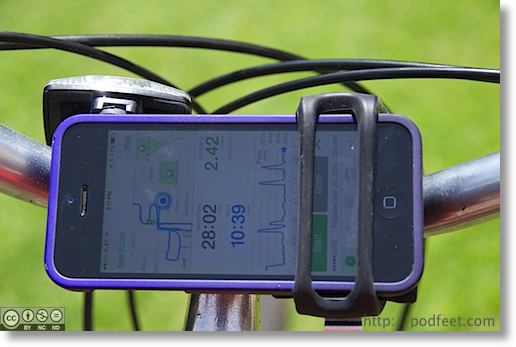 Luckily Pat Dengler, aka Your Mac Doctor came over for a geek play date a few weeks ago and she showed me an alternative mount for the iPhone that I really liked. It’s from a company I’ve told you about before called Nite Ize. They make those really cool cord management twist tie thingys – they’re thick with rubber on them and bendable, and come in sizes from a couple inches long to feet long. I interviewed the rep about them last year after Macworld and still love them.

Nite Ize seems to “get” how to make something simple and yet really functional. My requirements were to have a mount that made it easy to get my phone in and out, that I wouldn’t need a special case for it and that it would make it relatively easy to glance down at my phone to say look at a map while riding. The Nite Ize Handleband is a thick rubber strap that you wrap once around your handlebar lining up the semicircular cutout, and then pulling it tight slip the slot over a metal piece on the strap. Now your Handleband is very snugly strapped to the bike. At this point it still has a long flap on it, and you wrap again but this time grabbing your phone in the strap and gripping to a second metal tab. The strap as it goes over your phone only has two relatively thin rubber bands (again holding it REALLY snugly) and you align the phone so the gap between the straps is right where you need to slide to unlock. The rest of your screen is nicely wide open for touching and tapping.

This sounds way more complicated as I describe it here in text, so I put a couple of photos in the shownotes showing my phone on my bike. I should mention that my bike is configured so that it was easier to mount it on the cross bar to the handlebars, so my phone actually sits in landscape format. You’ll have to see which works easier for you. On top of the Nite Ize Handleband being a perfect fit for my needs, the darn thing is only $16 over on Amazon! But wait, there’s more! According to their notes, you can even use the metal piece as a bottle opener!