Big changes to podfeet.com – breaking the giant blog post of doom into little chunks throughout the week. I got to be a guest screencaster for Don McAllister’s Screencasts Online doing a show about iThoughtsX for the Mac and iThoughtsHD for the iPad. Should be available soon in the next episode of the SCO Magazine too for iPad. Why Dave Hamilton of the Mac Geek Gab rocks. In Dumb Question Corner David Bogdan asks how to get Safari to stop offering us push notifications (Clarify tutorial here). Wil Wheaton answers an 11 year old girl’s question about being a nerd (Video on Youtube.). Store and Secure Your MagSafe 2 Adapter with MagCozy. Tiny Portable Tripods for Your Smartphone or Tablet from Square Jellyfish. Discover New iOS Apps with TAPPD. Let Your iPhone Tell You the Value of a Resistor with ResistorVision – interview by Kirschen Seah of freerangecoder.com. In Chit Chat Across the Pond Bart takes us through Taming the Terminal Part 17 of n – Regular Expressions.

Remember last week I mentioned how sometimes I have to do an error correction from a previous show? Well this week Steven Goetz, aka @goatman caught me out. On my explanation of how I captured the Blood Moon, I said I had my lens set to 300mm which is really 200mm. I actually said it backwards. I have a 28-200mm lens, which is effectively 300mm. The Nikon crop factor on non-full frame sensors is 1.5 which is what causes this, but I was doing the math backwards. Teach me to not check my numbers! Thanks Steven for catching this!

Errata on Two Projects in Aperture from Bob Corea

Last week I when I was talking about Tidy Up! I mentioned that I have trouble dealing with duplicates in Aperture because you can’t see two Projects at the same time. I said this partly believing it was true but partly hoping I was wrong and that someone would write in and say, “hey dummy…” Bob Corea wrote in (and much more politely) said that you can option-click on a second project and it actually does open them side by side. I tested it and you can flip between views from a full shot of one image to the grid view of all the images, and even have different zoom on the two windows. This is so cool, Bob! I should also mention that I have this vague memory that someone showed me this before and I just forgot about it, so if my vague memory is right, thanks to whoever told me it the first time! 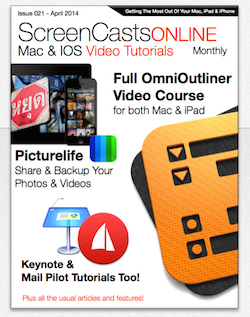 I got to be a guest screencaster for Don McAllister’s Screencasts Online doing a show about iThoughtsX for the Mac and iThoughtsHD for the iPad. Should be available soon in the next episode of the SCO Magazine too for iPad.

At last June’s Denver Comicon, Will Wheaton, aka Westley Crusher from Star Trek Next Generation, was asked by an 11 year old girl whether he was ever called a nerd when he was a kid and how he dealt with it. I’ve never been a huge fan of Mr. Wheaton, mostly because I couldn’t stand the character he played, but his answer to this young nerd girl was really heartfelt and gave her fantastic advice. I’m sure many of you have heard this already but I think it’s something we could listen to quite a few times and still learn from him. Let’s listen.

I just love that, what wonderful wisdom to realize that if someone is making fun of you, it’s not about you, it’s about them. I may play this for myself a lot more times; I just love it.

When Bart and I were on the horn this afternoon we answered David Bogdan’s question about how to stop Safari from bugging you about push notifications. When we finished recording Chit Chat Across the Pond, I whipped open Clarify, took timed screenshots to show the annoying popups and how to get to the Safari preference to kill this annoyance. I threw in a few words on each step, drew some boxes and arrows to make sure the selections were super obvious, and then I tapped the button to post to WordPress. In a few minutes I had a tutorial posted (in the tutorials category) that I could Tweet, Google Plus and Facebook to my heart’s content. Now this is all with Clarify 2 beta, by the way, being able to post to WordPress is a new feature for Clarify. In the past you would have to use ScreenSteps to post to WordPress.

If you think you might like to create short form tutorials to help your friends and family (or heck, to help remember stuff yourself, go download the free trial of the beta for Clarify 2 for Mac OR Windows over at the link in the shownotes.