Steve and I are both runners, and we love listening to podcasts while we run. We both used to use the little square iPod Nanos (loved them) but when Apple got rid of the clip version we knew it was time to start finally using our iPhones. We weren’t totally against the idea of switching, especially since it would free us from using iTunes on the desktop and all that syncing nonsense. 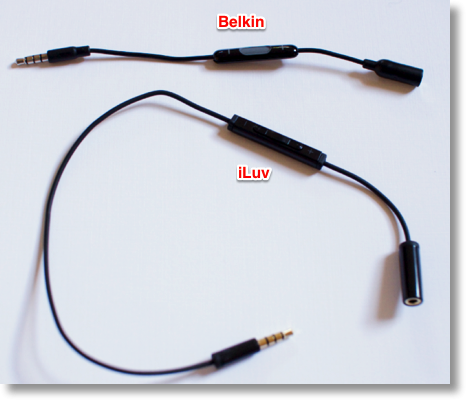 The reason we hesitated to use our iPhones for running was because we both hated all of the ways to hook them to your body. I hate armbands in particular – I’d used one ages ago on the long-form iPod Nanos and it was always slipping and I was always messing with it. When Rod Simmons of the SMR Podcast told me about the Spibelt, I had my solution. I told you about the Spibelt a few shows back – it’s a thin, adjustable belt with a stretchy pouch that you can squeeze your phone into. I wear mine on the front, Steve on the back and in both positions it stays firmly against us, no slipping, no bouncing. We have a great solution.

But there’s another problem to be solved. Apple’s ear buds practically repel themselves out of Steve’s ears. I thought he was just being a whiner at first, but it’s comical how they just fall right out the minute he puts them in. I like the Apple ear buds for walking, but when I run, the cord pulls down too much and it irritates me. For this reason we both use over the ear headphones from Sony. We don’t go for Sony because they have high fidelity or anything, we just like how they fit, have acceptable audio quality and because they’re over the ear they’re ideal for jogging.

It’s about time I finally get to the actual problem. When we have our iPhones happily ensconced insider our Spi-Belts, the headphones are plugged in and the podcast is blathering away, we have no easy way of stopping the podcast say to talk to someone we know on the strand, or even to talk to each other when we get back from our runs. Especially in Steve’s case since it’s around behind his back, it’s a matter of minutes to get the phone out to stop the podcast. It’s a bit easier for me with it in front, but it’s still a hassle. If we were wearing Apple ear buds, we’d be able to simply squeeze the control on the headphone wire to pause the show.

The Apple ear buds also allow have volume up/down which would be really useful when I’m running past the really loud street sweeper that goes along the strand in the morning to clear out the previous night’s sand.

It turns out there’s a way for Steve and me to have our cake and eat it too. Several companies sell a little adapter cable that connects to the existing headphone cable to give you the same remote controls you have with iPhone earbuds. We tested a couple of these, the Belkin Headphone Adapter with Remote for Apple iPod shuffle, and the iLuv iPod Remote with 3rd-Party Headphone Adapter, but those aren’t the only ones out there, Scoche makes one and others as well.

Both Steve and I are delighted with these adapters. We now can control volume, and can pause/play our podcasts without removing our phones from our Spibelts. As we played with them, we realized that they can do pretty much everything the iPhone earbuds can do. For example, did you know if you press the + or – button, you can take a photo? This makes it WAY easier to take a selfie with the good back facing camera than trying to tap that button when it’s facing away from you. This works on our adapters.

We also tested some more advanced functions that the Apple earbuds give you, and they worked as well. The way the functions work is highly dependent on the application you’re using. For example, on our adapters (and Apple’s earbuds) a double click on the center of the adapter in Pocketcasts skips forward 45 seconds which is AWESOME for those podcasters who drone on and on in their ads. (Not me of course.) If you’re using the Podcast app on the iPhone the same double click skips to the next song/podcast. If you double click and hold on Pocketcasts it jumps to the next song/podcast, while in Podcasts it fast forwards. The good news is that the functions that you know and love from your Apple earbuds can be used on any headphones you like if you use one of these adapters.

It turns out you can even initiate Siri with these adapters using a long single press, but since the adapters don’t have a microphone you’ll actually be using the built in microphone on your iPhone and listening via your headphones.

The Belkin adapter is only $13 on Amazon but it’s been discontinued by Belkin so you may want to move out on that one quickly. It’s 6.5″ long, so gives you a little bit of extra length. The iLuv adapter is $20 but actually extends your headphones by 12″. The iLuv adapter is a bit easier to click too which could be an advantage. Steve liked these adapters so much that he’s put one in his car because he uses his iPhone via the headphone jack and he’ll be able to stop and start his podcasts without having to drag the phone out of the pocket in his dash now. The extra length of the adapter makes it more accessible too. I put links in the shownotes to both the Belkin and the iLuv adapters, but like I said there’s more to choose from if you think this would solve a problem you have.

11 thoughts on “Add Apple Remote Functions to Any Headphones”