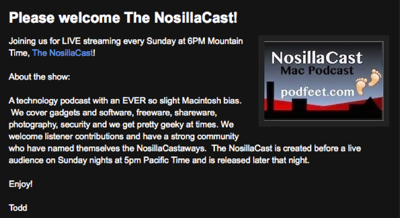 I am really excited to announce that the NosillaCast is now available on Alpha Geek Radio. Rather than try to explain it to you myself, here’s what founder Todd Whitehead sent me:

“Alpha Geek Radio is an association of independent Internet Radio hosts and Podcasters, dedicated to advancing the cause of Geek Culture in all of the marvelous forms that it takes. In addition to regularly scheduled talk radio shows and a 24/7 music channel run by Coverville, the network also provides live streaming of annual conventions and shows such as Phoenix Comicon, w00tstock, PAX, and Nerdtacular. The station streams 24/7 on all channels, with recent repeats of episodes playing whenever a live show is not on the air, so there is always good, nerdy content available whenever you may tune in.”

I’m really excited because the other shows in there are so awesome – everything Scott Johnson and Tom Merritt – some of my favorite geeks! If you go to AlphaGeekRadio.com any time of the day or night you’ll see three regular channels, the Coverville music channel and a special events channel. The channel shows the cover art for whatever is currently playing and you simply tap on it and hit play.

At first it was hard for me to get used to this idea – it’s streaming, not on demand, so you pick up the show wherever it is in the stream, just like, well, radio! But you actually can pause and rewind unlike radio, so if you miss something you can back up.

I love the way there are all these amazing ways to listen to shows these days, and Alpha Geek Radio is a great example of fun innovation getting the content out to more people. Todd also turned me onto an app for iOS, Android AND Windows Phone for Chris Ashley, and even for BlackBerry that lets you listen to live radio including Alpha Geek Radio, and it’s called TuneIn from tunein.com. Install TuneIn and you’ll get a search area where you can browse local “real” radio stations, music, sports, news or talk station, and then Top Podcasts. If you do a search for Alpha Geek Radio you’ll see all of the channels there too. Be sure to favorite Channel 3 of course because that’s where you can hear the NosillaCast!

One more thing I should explain, he will be playing the live show, well, live, on Sunday nights at 5pm Pacific time so it’s another great way to hear the live show. In between those live shows, he’ll run the NosillaCast from that week, together with other shows on that same channel. Let me know what you think about it – I think it’s awesome.

1 thought on “NosillaCast is Now on Alpha Geek Radio”