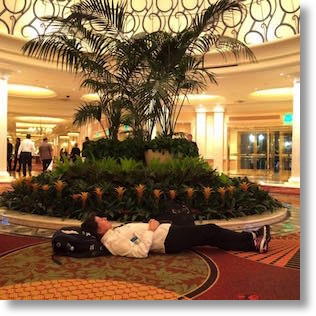 Steve and I had a great time for our first trip to CES. I want to start by talking about how far you walk at this event. You have heard people talk at length about how exhausted they were, how long the walks were. I must be a real maniac in my regular life or these people are a bunch of lazy slobs because I LOST steps by going to CES. Seriously. I normally go about 16K steps a day but I had to beg people to walk with me instead of taking cabs and busses around to even hit that number! Steve and I walked to the convention center which was about a mile from our hotel, and then I talked Chuck Joiner of Mac Voices into joining us on long walks to the other hotels where there were events. I did beat my regular distance one day and match it a second day but the first day was only 13K so that was pretty disappointing. I was REALLY hoping to have some big 25K type days.

I think the reason CES is actually exhausting is because of the brain meltdown. On the first night, we went with Chuck to a special session just for the press called CES Unveiled. These press events were probably the best thing about CES for me. They are small events with maybe 150 vendors and a limited audience so you get really good close access to the vendors without the giant crush of crowds. Steve and I did a TON of video interviews in a really short amount of time. It started at 7 and ended at 10:30. At 10:15, my brain told my body I was done. I mean REALLY done. We went outside to wait the 15 minutes for Chuck. At first I was standing, then I sat, and finally I just laid down on the floor in the lobby. Steve is such a good husband, of course he took a photo of me and immediately posted it everywhere. For the record, we should note that there was an open bar at this event…and Steve and I split a half of a beer. My MAIN point is that maybe standing is more tiring than walking, and being “on” is exhausting, because I only got 13K steps that day but it took it all out of me.

4 thoughts on “How Much Do You Really Walk at CES?”