This week Steve’s uncle Bob wrote to me with some problems he was having controlling space on his iPhone and we thought maybe his vast podcast library was a culprit. He was using the Apple Podcasts app. I suggested he try using Pocketcasts for iOS from ShiftJelly because it gives a lot more control to you on when podcasts download, how many you keep on a podcast by podcast basis. By the way, if you’re looking for a good podcast app on Android, Pocketcasts is available in the Google Play Store too.

Anyway, uncle Bob installed Pocketcasts and really liked it. But then he wrote about a use case that looked like he’d lost. Let me use his words to explain:

“One drawback is I can’t use this app within the Mac environment. What I mean by this is I can’t play podcasts through my computer while simultaneously using the computer for browsing and such. I used to be able do that using the Podcasts app when the phone is charging on the computer via USB cable by toggling the phone icon on the first iTune screen that pops up after connecting the phone. From there I go down to podcasts, but that is the prescribed Apple delivery mode, and it doesn’t appear to recognize Pocket Casts app via that route. I hope my annotated screen shot helps with the description. Don’t know if there’s a fix for that. One of my multi-tasking things I do—listen to classical or jazz while analyzing news.”

Luckily Bob included a screenshot showing On My Device in the left sidebar of the current iTunes with a giant arrow pointing at Podcasts under it. I honestly had no idea you could use that to access your iOS content and play it back on the Mac! I started to write back to him that yes, he’d lost that functionality but then I had what I’ve chosen to think of as a brilliant idea that might just give him what he wanted. I tested my idea, and sure enough it worked! 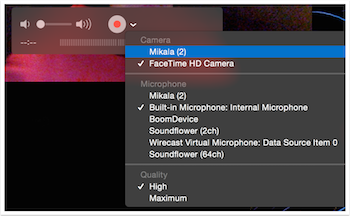 The basis for this trick requires that you’re running Yosemite, because it comes with a new version of QuickTime. Apple has now built into QuickTime the ability to record your iOS screen to a movie or audio recording. I would love to take credit for discovering this new QuickTime feature but I can only take credit for being smart enough to watch Don McAllister’s ScreenCasts Online and watching him tell us about it.

Anyway, I thought if QuickTime can display the screen of our iOS device, then maybe I can use it to play back content for Uncle Bob. If you plug your iOS device into your Mac and launch QuickTime, and request a new audio or video recording, you can set your iOS device to be the source for the audio and video.

You KNOW I made a Clarify tutorial on this already, right? So don’t worry about following step by step because it’s all happily up under tutorials on podfeet.com:

How to play content from your iOS device on your Mac

The only tricky bit of this is that the audio playback volume is controlled from within QuickTime which is kinda weird. You can’t use the standard volume controls on your Mac or your iOS device. Even if you forget this last bit you’ll figure it out soon enough because QuickTime defaults to muted so you won’t hear a darn thing and you’ll be forced to figure it out!

I have to say I’m pretty proud of myself for thinking of this one!