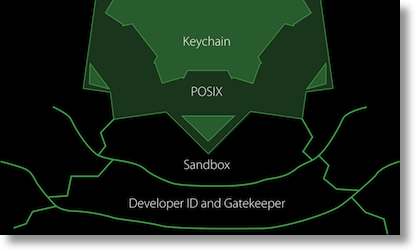 Our Dumb Question this week comes from John Ormsby, aka NasaNut in the chat room. He’s asking whether it’s ok to follow the advice of some app developers and partially turn off the protections Apple has put in place in El Capitan.

Here’s John’s full question where he explains why he’s asking the question:

I have been using a utility that has been extremely helpful to me for quite awhile. It is XtraFinder. This utility allows you to have two (or more) finder tabs side by side and active in the Finder. This allows me to easily drag & drop files from one location to another. I am not a programmer but I understand that the way this utility works is that it injects code into the Finder, thus modifying the Finder as opposed to a stand alone application. The problem is that the new security features in El Capitan (System Integrity Protection or SIP) prevent this utility from working. There is also a competing product that suffers from the same problem with El Capitan. That utility is TotalFinder.

Both of these developers discuss the issue on their websites and, although they are clear to say that are not recommending turning off SIP, they explain how (partially?) do it so that their applications will continue to work.

Reading the comments on the TotalFinder forum, a lot of people seem to be of the opinion that “We did not have SIP before El Capitan and didn’t have a problem so we don’t see a need for it now”.

I am aware that there are applications such as PathFinder and Forklift that provide similar functionality (and more) but it is so much easier to simply use the Finder and not have to worry with another application for this one feature.

So, and this is really targeted at Bart unless you two decide to add it as show topic:

Here are some links to the developers sites and forums if you want to take a look.

I think I understand it and could probably get a 90% answer done on it myself but it would be way better to have Bart lead the discussion.

Bart and I have never been big fans of things that fiddle with the Finder, and for just the reasons that you describe here. There are those that do enjoy a good kernel extension modification ( George from Tulsa) but it never sounded like a good idea to me.

And then there’s the lack of permissions repair now because apps can’t mess with each other – huzzah!

Anyway I bet Bart likes this idea as much as I do,

The longer answer is that I have advised against these kinds of hacks for years. They are a recipe for trouble. Apple, rightly, assume that the Finder is as they left it, so when they release software updates, they do not add in extra code to work around these hacks. Most of the time the changes Apple make will not interact with the changes the hackers make, but there is a real possibility they will some day. Now, if you hack something non-critical like Pages, the only risk is that you break Pages. The Finder is different – it provides most of the OS X UI – the desktop is Finder! So, if you break Finder, you have an un-usable OS!

Basically, these kinds of ‘utilities’ are playing with fire – avoid them like the plague has always, and remains, my advice. If you don’t like the Finder, use an alternative, don’t butcher the OS!

So – as for why it’s a bad idea to turn off System Integrity Protection – simple, it stops malware from altering the OS. It is true that we survived without it in older versions of OS X, so it is tempting to think that it is not important. But, that attitude misses a very important reality – security is a cat and mouse game – last year’s cat was able to stand up to last year’s mouse, but last year’s cat may have more trouble with next year’s mouse, not to mention the mouse from five years into the future. Apple is not increasing it’s defences for no reason – developing SIP cost a lot of money, and Apple didn’t make that investment on a whim – they know the attackers are upping their game, so Apple is upping our defences in response.

Apple are not going to roll back their security in OS X, so you are on a road to nowhere IMO. Today, it is possible to turn off SIP, and it may well be possible next year in OS X 10.12 Venice Beach (or what ever they call it), but I would not bet on it remaining possible for many versions into the future. Today, running without it is not reckless, but will that be true next year, or the year after, or five years from now? That’s another bet I wouldn’t take. All these hacks are dead men walking IMO.

I’ve chosen to make my career in an industry that changes rapidly and relentlessly. After a decade and a half of experience, the most important lesson I’ve learned is to avoid swimming up-stream if at all practical – been there, done that, and that way lies only frustration and anger! I believe one of the eastern religions describes life as a river, and teaches the importance of noticing which way the current is flowing – I think they were definitely on to something!

I’m going through this myself at the moment. I ADORE Aperture. But it’s on a road to nowhere. I need to become proficient in Adobe’s imaging suite. It’s painful in the short-term, but in the long term it’s inevitable I end up in the Adobe world, so I’m putting my energies into making that work for me, rather than fighting it.

Not sure if this counts as tech advice or philosophy, but either way, those are my thoughts for what they’re worth 🙂

3 thoughts on “Dumb Question Corner – Is it ok to partially turn off System Integrity Protection?”