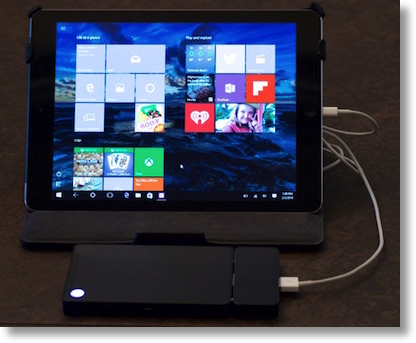 Every once in a while a gadget comes along that’s so cool you just throw your entire belief system in the trash. Or at least that’s what happened to me. I bought the first PC I’ve owned since 2004. Back then I did it just to see what it was like to build a PC, I had no intention of actually using it. This time I bought a Kangaroo PC because it had one wicked awesome feature.

The Kangaroo PC is very small, about the size of a plus-size iPhone and it can use an iPad as its display! How cool is that? I bought the Kangaroo for $100 on NewEgg. As much as it pains me not to give you an Amazon Affiliate link, it’s twice that price on Amazon so go for the NewEgg option or you can buy it via the Microsoft store.

Kangaroo comes with a little dock plugged into its proprietary connector. The dock gives you HDMI, one USB 3, one USB 2 and a DC charging port. The Kangaroo itself comes with a micro-USB port for charging so you don’t have to carry around an external charger. It has a 2.24GHz Atom processor, intel Graphics, shared video memory and 2GB of RAM. It’s got a 32GB eMMC flash drive, a micro SD slot so you can add more storage, 802.11 A/C and Bluetooth 4.0. It’s certainly not a powerhouse of a machine but mighty be fine.

We’ve got the specs out of the way, let’s jump into using it. The Kangaroo comes with stock 64-bit Windows 10. In order to use the iPad as a display, you need to add some software from the iOS app store called OSLinx, and you have to install OSLinx on the Kangaroo too. That means you do have to use the Kangaroo with a “real” monitor first. I spoke to Ben Chu from Kangaroo when we were at CES and he explained that they don’t bundle the OSLinx software in because they wouldn’t be allowed to sell the Kangaroo in the Microsoft store if they did. No big deal, free download. 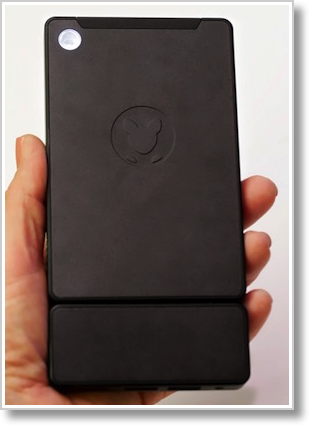 I launched OSLinx, and on screen it has two simple things: The first says USB Connection with a red X and instructions to connect the Kangaroo to the iPad with a Lightning-to-USB cable. The red X changed into a happy green check mark. The next line says Connection with the OSLinx Server. I should probably figure out how to turn on the Kangaroo now.

I found a round button, held it down and a translucent ring (that’s oddly a hole through the device) started to glow. When it was blue I thought that seemed like a good sign. On screen I heard the happy connection sound the iPad makes, and a window asking if I want to Trust this Computer. This is standard when you connect an iOS device to a computer, it allows you to sync iTunes. Of course we don’t need to do that, but you have to agree to the trust for OSLinx to work. It doesn’t appear to save that information, because I get this question every time I connect the devices.

The next thing I knew, I saw the most terrifying image ever – Windows 10 running on my iPad! Of course it’s not REALLY running on the iPad but it looks like it is. To calm myself, I used a four-fingered swipe to switch to other iPad apps and sure enough I could go see iOS and come right back to Windows. So. Wicked. Cool. 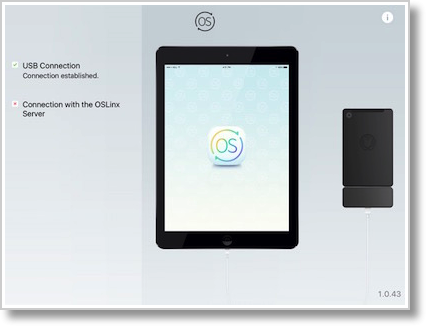 The funniest thing about this little project is that I have no idea how to use Windows. I’m not joking here, it’s mysterious to me. When Windows 10 launched for the first time it was in tablet mode so that was pretty easy. I was able to go into the Windows store and download and install Twitter, but I got lost after that. For example, how do I make an app not full screen? There used to be three buttons in the upper left, and I could have sworn one of those toggled full/normal size windows but that doesn’t appear to be around any more.

I shouldn’t focus on Windows 10 itself, I’ll get help from the SMR Minions (the somewhat rabid Windows fans of the SMR Podcast) but it was interesting to me how incompetent I feel in this OS.

Let’s get back to the Kangaroo itself. For web browsing, tweeting and stumbling around on the device, I found it to be snappy and responsive on an iPad Pro and an iPad air. I noticed no lag because of this mutant Frankenstein setup which was cool.

I use the Apple iPad Pro keyboard and it wasn’t recognized by Windows, which makes sense since it’s not Bluetooth but rather uses the proprietary connector. I tried both a Logitech and Apple Bluetooth keyboard and they paired immediately with Windows on the Kangaroo and worked perfectly. It took me a long time to find Bluetooth Settings on Windows but that’s not the fault of the Kangaroo!

When I first played with the Kangaroo using the iPad Pro as the display I noticed that the battery didn’t last anywhere near the four hours they promise on the Kangaroo. But remember I mentioned the happy “connected” sound the iPad made? That’s the sound the iPad makes to tell you it’s charging the battery! So that poor little Kangaroo is having the life sucked out of it by my gigantic iPad! It would be cool if there were a way to tell the PC NOT to charge the iPad – maybe that’s a setting in Windows someone could show me?

The Kangaroo also has a fingerprint sensor that you can use to log into Windows 10 using Windows Hello. After a hundred years searching around in Windows I figured out how to add my fingerprint to my login. It worked the first time I tried it … and hasn’t worked again since. It also wouldn’t agree to let me train it with a second fingerprint. So don’t count on the fingerprint reader as a feature you could use consistently.

Of course I bought the Kangaroo because of the iPad integration but after I bought it, Kyle unloaded some tech from his apartment, including an HDMI monitor. It was time to try out the Kangaroo as a real PC. We cobbled together a hilarious pile of glop to do this. We had a blast trying to test out all the different things we could attach.

Kyle also gave us his Logitech speakers including a powered subwoofer, but the Kangaroo doesn’t have an analog audio output jack. Have no fear, we had a solution to that! Remember the Antec Smartbean I reviewed that adds Bluetooth to any powered speakers? We plugged the Smartbean into the Logitech speakers and used Bluetooth on the Kangaroo to connect to them. And guess what? EVERYTHING worked.

The only pain point on the Kangaroo I’ve run into so far (that I can’t blame on Windows) is the graphics. I’m not a graphics snob, but 1024 x 768 on that 24 inch Dell display would irritate most people. I didn’t think it looked that bad on the iPad Pro but graphics snobs would likely cringe at how it looks. Video playback misses a few frames, especially if you’re watching full screen. It’s not horrible but I sure wouldn’t call it smooth.

I wondered when I first got the Kangaroo why they have the separate dock for the device and yet include it in the box. Then I realized that you could have a dock at home and one at work and simply carry your PC back and forth. That’s pretty cool. Kangaroo sell extra docks for $39.

I know it’s weird to think of me as having Windows in my house but I’m really digging the Kangaroo PC. Every once in a blue moon these days, you find something for which you NEED Windows, and rather than spending $100 to get a copy to run in a VM, I now have a dedicated piece of hardware on which to run it. In other news, Steve won’t let me put it on our regular wireless network, he made me put it on our Guest network.

5 thoughts on “What Would Make Allison Buy a PC?”