People love clocks. I’m not sure why, but even in the middle of the night if we wake up, we want to know what time it is. But a clock on your bedside table can be a problematic if the numbers are too bright and keep you awake.

A lot of people keep their phones plugged in next to their beds, but it’s a hassle to wake them up. If you’ve got a phone, a tablet, a smart watch and a clock, where do you plug in your bedside lamp? For years Steve has had an iHome clock radio to give him a clock by his bedside. It has a 30-pin dock connector for his iPod, so that’s super useful nowadays. I said it was a radio but who listens to radio any more?

The iHome was expensive at $100 but it had one feature that sold Steve on it. He could dim the clock every night and turn it back up in the morning. It wasn’t ideal for me because from my side of the bed, without my contacts, I couldn’t read the numbers. Oh well, it worked for him. 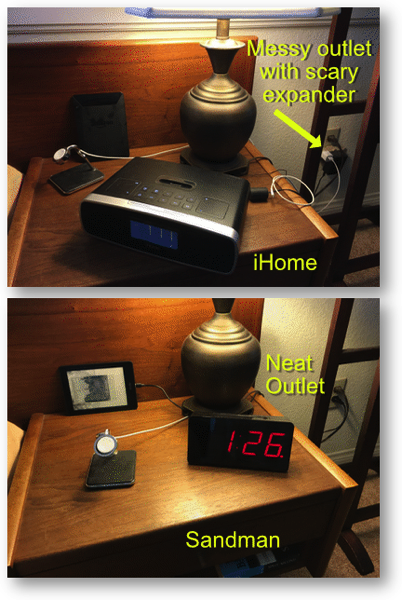 Recently I was approached by Palo Alto Innovation to take a look at the Sandman Clock. It’s a clock, that also acts as a USB charging station for four devices. That’s all it does. No 30-pin dock connector, no radio, no bluetooth anything. It’s a clock and a charging station. Doesn’t sound too exciting, does it?

Let me give you a spoiler. I was busy last week when it arrived but without asking me, Steve replaced his iHome clock radio with he Sandman Clock. He loves it.

Ok, so what’s to love? Why the glee from Steve? The Sandman has giant LED numbers. Seriously, they’re 1.8″ tall (that’s 4.5cm to you metric folks). Even I can see numbers that big from across the room. The best thing is that they auto-dim when it gets dark. Being engineers, we spent several minutes covering up various parts of the device till we figured out the sensor is on the bottom left of the front face of the clock.

The Sandman is beautiful in its simplicity. The clock can be in 12 or 24 hour mode, and in 12 hour mode there’s a little red dot in the lower right telling you if it’s PM. If the alarm is set, there’s a red dot in the upper left. That’s it for the screen. On the top there’s a snooze button and nothing else. The back is almost as simple: there’s an on/off switch for the alarm, and a plus and minus button. These buttons are to set the clock and the alarm. The Sandman folks made a conscious design decision to not increase complexity and cost of the design by adding in chips to find the time for you and to keep track of stoopid Daylight Saving Time and all that. 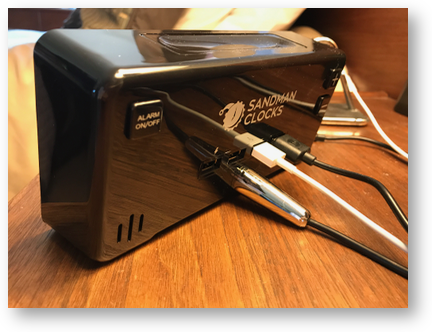 Also on the back are four USB ports, one high power at 2.1 amps for tablets. You can have the cables go out the back, or to come out the front by routing them under a channel or even to the sides. The cable management is great, and the Sandman Clock itself is less than half the size of the iHome making our bedside table looks so clean and organized now.

Steve is super picky about how dim the numbers must be for him to be able to sleep and he said the dimming was perfect. I read the manual (I know, right?) and discovered that if it’s not perfect for you, there’s a combination of the simple buttons that will allow you to change the amount that it dims. 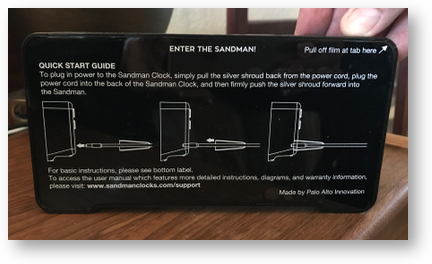 When you first open the Sandman Clock, it’s an odd experience. You’re looking at the face of the clock but there’s a sticker explaining how to plug it into power. They’ve got a tricky little shroud that goes over the power cord at the back of the clock that turns into a stand to hold it up. It works great and it makes the packaging super efficient, but it was kind of an odd first look at the clock. not a bad thing, just surprised me.

The Sandman Clock is $45, comes in black or white (perfect for office, bedroom or kitchen) and gives you a great clock that’s also a 4-port USB charger. Simple, perfect solution to both problems. Check out the images in the blog post to show how much nicer and neater the bedside table looks with the Sandman now. You can find the Sandman Clock at paloaltoinnovation.com/…. If it looks good to you, you can buy it at the Amazon Affiliate Link in the show notes.