Allison reviewed the Backblaze cloud backup service earlier this year. In her review she explained why she had decided to abandon CrashPlan and how Backblaze was able to get her backed up in double quick time. I’ve been a fan of Backblaze since I also decided I had to quit CrashPlan. To date I have over 4TB of data in my Backblaze backup.

One of the key differences between CrashPlan and Backblaze was that CrashPlan had more than one way to back up your data. While Backblaze just sends your data (securely) up to their cloud, CrashPlan could also back up between your drives, across your network, and even across the internet, all for free. One of the coolest features was that two CrashPlan users could back up to each other’s computer over the internet and this was absolutely free. Unfortunately I never found anyone I could reciprocate with to try this out.

Now it has to be said that you can back up between your own drives and on your own network using applications like Carbon Copy Cloner or SuperDuper, but while these can be scheduled, it’s not quite the same as the always-on incremental backup that CrashPlan could do. So while I think Backblaze is the better tool for cloud backup at this time, I have to give CrashPlan a point for being able to do something pretty useful that Backblaze can’t.

With Backblaze, if you delete a file from your computer, it will also disappear from your backup 30 days later. With CrashPlan there is an option to never delete files from the backup. Is that another point scored for CrashPlan? Well, maybe. It’s time to look at one thing Backblaze can do that CrashPlan can’t.

CrashPlan’s ability to never remove deleted files is a double edged sword. You won’t ever lose your data, but your backup will grow and grow over time, and if you do a restore, you will potentially get back a lot of stuff you had deleted for good reason. What if you could somehow tell your backup service to keep specific files forever, no matter what? 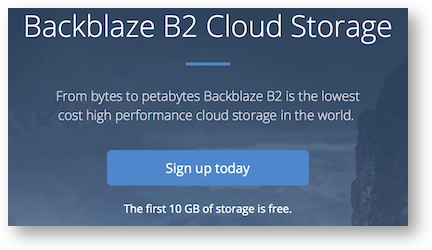 About a year ago, Backblaze launched a service called B2 at backblaze.com/…. B2 is a cloud storage solution along the same lines as Amazon S3, Google Cloud, or Microsoft Azure, except it’s way cheaper. B2 gives you a chunk of storage in the cloud which you have total control over. While designed for companies to use as a back end for their web services and apps, or for storing masses of digital media, it’s cheap enough for the likes of you and me if our needs are modest.

With B2, you pay for a number of things. You pay for the storage you use at half a cent per gigabyte per month. You pay for downloads at 2 cents per gigabyte. If you’re just using B2 as an archive, that’s it! Oh wait – the first 10GB of storage is free and the first 1GB of downloads per day is free. Did I mention uploads? All free.

I currently have 15GB of files stored on B2 and the cost for that, including the free first 10GB, is 69 cents per year if I don’t download any more than 1GB per day. They’ve only been up there a few months and I haven’t been charged a cent yet. I imagine I will get a 69 cent bill shock at the end of my billing year.

What do I have stored on B2? It turns out I’ve recorded 277 podcast episodes over the last decade or so. They’re all up on B2, not for people to download, but to ensure I have them safe. I also have backups of old web sites that are no longer live, a complete copy of the contents of my father’s old PC, and a handful of other files relating to the old web sites. These are all things I do not want to lose but rarely need access to. I actually do keep a local copy of Dad’s PC files, but it’s excluded from my regular Backblaze backup because I know I have it permanently in the cloud, plus my brother has a full copy as well. We want to be super sure we don’t lose any of his data.

I’ve considered doing a permanent archive of at least some of my photos, as well. I had an incident recently when I discovered that while migrating from Aperture to Adobe Lightroom I had lost 9 months worth of photos, taken from April to December in 2010. I luckily found these on an old hard drive backup I forgot I had, but they had aged out of all of my other backup regimes by the time I had discovered they were missing. Storing half a terabyte of photos on B2 will cost me $30 per year. Half the price of a regular Backblaze subscription. For comparison (according to B2’s price calculator), the costs on Amazon, Microsoft, or Google for that same half terabyte are between $126 and $156.

If you’re already a Backblaze customer, you can easily add B2 storage to your account by logging in on the web site. If not, you can sign up at backblaze.com. If you want to store 10GB or less, you can do so completely free of charge if you don’t download more than 1GB per day.
One final thing. Uploading to B2 can be done via the web site, but otherwise you will need some suitable software. I had some success with the CyberDuck FTP application – the first time I tried it it kept failing, then it subsequently worked – but as of now I can’t go past recommending the brand new Transmit 5 from Panic software, which now has built in support for B2.