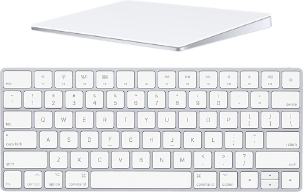 I’ve been feeling like the unluckiest Apple fangirl of all time with all the problems I’ve had with my Apple gear in the last year. Most recently you might remember the saga back in August of my 2016 MacBook Pro going belly up (wouldn’t charge). It would only stand out in your memory because my 2013 backup MacBook Pro couldn’t connect to Apple’s services so I ended up asking executives at Apple to give me a hand.

Anyway, that all got resolved and I got my 2016 MacBook Pro back with a shiny new logic board. I haven’t wanted to mention it because I was hoping the problem would just go away on its own, but I’ve been having a problem with the Mac ever since I got it back. Do you do that too, go into denial and just wish these things away?

When I sit at my desk, I use the Apple Magic keyboard and trackpad instead of the built-in keyboard on the laptop. That lets me put the Mac off to one side and use my now 6 or 7-year-old 27″ Apple Cinema Display as my main screen.

But ever since I got the Mac back from the shop, I’ve had dropouts of the Bluetooth connection from the keyboard and trackpad to the Mac. I’ll be typing away and suddenly no letters are coming out on screen. After a few seconds it comes back. Sometimes the trackpad disappears too, but more often than not it’s the keyboard. It was happening at least every other day, sometimes as often as several times in a single day. It was driving me bonkers.

I couldn’t believe I was going to have to bring my Mac in yet again. But finally, after two months of aggravation, I called AppleCare. The advisor gave me three things to try. First, he said to unpair and repair the devices. I was pretty sure I’d tried that already, but I wasn’t 100% certain so I said I’d try that again. He said if that didn’t work, try resetting the SMC, or System Management Controller. My understanding of the SMC is that it manages power but what the heck, it only takes a minute to reset it. Finally, he said to reset the NVRAM. This is one of those incantations that we’ve been doing for a very long time since it was called PRAM, but for the life of me, I don’t know what kind of problems it’s supposed to fix.

Of course, this didn’t fix the Bluetooth dropout problem, so I called back the next day and got Jeff on the phone. Jeff suggested we run a hardware diagnostic test. I didn’t know you could do this, but if you boot with a specific key sequence, your Mac will connect to Apple’s servers and run a test. Pretty cool. Unfortunately, Jeff didn’t seem completely clear on the key sequence with which to boot in order to invoke the diagnostic test.

At first, he had me use option-d-down arrow, but my Mac booted normally. Then he said, “maybe you don’t hold the down arrow…”, so I booted with just option-d. Yet again, I had a normal boot up. Finally he said, “maybe try just d?” Emboldened by his confidence and skill, I tried it, and this time it did run the diagnostics! The bad news (or maybe it was good news) is that it said there were no hardware problems found.

Jeff had no other tools up his sleeve so he suggested he make me a Genius Bar appointment at my local Apple Showcase. I know I”m lucky to have one nearby but I’m still going to complain about the fact that even with his help, he couldn’t get me an appointment for a full week.

Look At Things When They’re Not Broken

On the Mac Geek Gab, Dave Hamilton has said quite a few times that it’s a good idea to look at things when they’re not misbehaving, so you’ll have some clues when things do go wrong. For example, he says to look at the lights on your router. You might see a solid green, 3 blinking lights, and one amber. If you get a sense of that pattern, then when you’re having network problems you can look at the router and see if anything looks amiss.

He also suggests poking around in the Console when nothing is wrong. The problem with the Console is that it’s really alarming. It’s chock full of error messages and other scary things. For example, right as I’m writing this up I can see a message in the system log that says, “Unknown key for Boolean: _HighBitsASLR”. That has to be bad, right? Well no, to the best of my knowledge, my Mac is running swimmingly right now!

I decided to put Dave’s advice to good use. At a time when my keyboard and trackpad were both happily connected and functioning, I opened Console and I did a search for Bluetooth. I watched the messages scroll by. I had no idea what the messages meant, but I got a sense of what they looked like.

After a day or two, I got a dropout of my keyboard and trackpad. I INSTANTLY used the app switcher to flip over to the Console app and noted the time: 07:10:49. At the very top, it said, “blued EVENT: Disconnection Complete: Reason = 19”. I did a search for that line and found other people with Bluetooth dropout problems (often with audio) but no one had the solution. Also in the list of error that came up at exactly 07:10:49, I found one that said, “deviceDestroyed”. Well, that sure doesn’t sound good!

I think I can help Apple engineering to pinpoint where in their code the problem might lie because there’s a typo in the error message. It says “unsubsribed from characteristic” and later “didUnSubsribe”. If they can find the person who can’t spell subscribed, maybe they can track down the error!

The Genius Bar, AKA Table of Sadness

Anyway, I was excited to march into the Apple Showcase (some call it the Apple Store) for my Genius Bar appointment, now that I was armed with some solid data to help them solve my problem.

My Genius was Glen and I was pleased to see him because he was the same person who helped me when I got this very MacBook Pro back two months ago. I also like Glen because he understands that I’m a pretty darned high-end user, so he listens to my diagnostics first instead of trying to hand-hold me. I described all of the symptoms, told him I’d done the SMC/VRAM reset dance, and that I’d run the hardware diagnostics. Then I showed him the log file I’d captured from Console.

He went to the back room for quite a while, during which time I tried to entertain the other people at what I have come to call, “The Table of Sadness”. I have my own custom chair at the Table of Sadness since I visit so often. I got it when they gave me my own parking place after I received lifetime Platinum status in the AppleCare frequent flier program.

Eventually, Glen came back and had a suggestion. He said that there isn’t a “known issue” but there’s evidence that suggests it could be Handoff interfering with other Bluetooth services. Handoff is part of Apple’s Continuity suite, and it allows you to start a task on one device, and then move between iCloud-connected devices to continue. You can open a Safari window on your iPhone and then go to your Mac and in the task switcher, you’ll see a distinctly different Safari icon which represents the web page on your iPhone. Handoff also enables Universal Clipboard which allows you to copy content on one Apple device and paste it on another one.

He suggested we try turning the Handoff service off for a bit to see if it solves the problem. I wouldn’t have known where Handoff was in System Preferences if Glen hadn’t shown me, it’s in the General Tab. Who goes in the General tab, ever? The checkbox he had me uncheck is labeled, “Allow Handoff between this Mac and your other iCloud devices”.

I am delighted to report that I met with Glen 8 days ago and I have not had a single Bluetooth dropout since!

Glen said he thought they were addressing the problem in High Sierra and for sure I’ll be testing that when I have the nerve to move my production Mac to the new OS.