Eric in Durham, NC sent in our Dumb Question this week, and it’s a really interesting one:

Hey Allison, here is a dumb question for you. I finally got rid of my Android phone and got an iPhone 😀. With that in mind, should I switch to Apple Photos app instead of using the Google Photo app? What is the difference between the two?

Well, Eric, that sounds like an easy question to answer, but I can pretty much sit in a room alone and have the argument for both sides with myself! Let’s talk through the features and see if there’s an answer.The hard part about answering is that it all depends on what you want to do. Dare I say it depends on what problem you’re trying to solve? Google Photos and Apple Photos are really two different beasts. 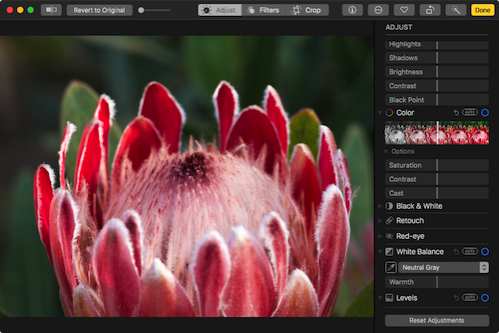 Apple Photos on the Mac is a quite competent photo editing application, especially with the advances in High Sierra. There are multiple controls for lighting, color, retouching, levels, curves, definition, noise reduction, sharpening, vignettes and more. They have a plugin architecture that allows you to add even higher functionality like the tools from Affinity Photo. Image edits in Apple Photos on one device are synced across all of your Apple devices and on the web at iCloud.com.

Apple Photos is also a digital asset manager. It supports multiple folder depth and albums and keywording (but not hierarchical keywording). It even has smart albums so you could, for example, create an album within a date range taken by a specific camera model at a specific location.

With iCloud Photo Library, your full resolution photos are synced to the cloud and optimized versions can go to your smaller devices. But if you live in a mixed OS world, your Windows and Android devices will have to depend on iCloud.com for Photos.

Google Photos is very limited in the editing of photos. It’s coming along but it’s nowhere near as capable or as extensible as Apple Photos. 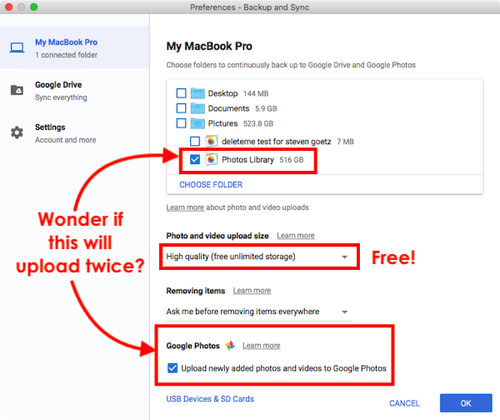 On the other hand, Google Photos is a fantastic way to get cross-platform uploads of photos from all of your devices to all of your devices. It’s a much more platform agnostic experience.  There are upload applications for Windows, Android, iOS, and Mac.  Storage of your photos and videos is free if you’re ok being limited to 16MB images and 1080p videos. If you want full resolution, that will cost you extra.

Apple’s iCloud Photo Library is free at the lowest level for 5GB, but who has a library that small? You can buy iCloud Drive storage at $1/month for 50GB, $4/month for 200GB. 2TB is the most expensive plan, and at $10/month and you can share that storage with your entire family.

That same $10/month will get you only half that amount of Google Drive Storage: 1TB for full res videos and photos. To be honest, even with my 70K image photo library of RAW photos and some videos, I’m only using 600GB so far, so 1TB is probably not a limitation.

I would bet most people would go with the free plan on Google Photos and not care about the size limitations of the images and videos. Then again, you just bought that iPhone that can take 4K video, do you want them dumbed down? Only you can answer that question.

Starting to see how I can argue with myself on this?

If you’re super organized and love to put your photos into albums and folders and name them, Apple Photos might be a better choice. But if you are tired of organizing your photos (or were never diligent about it before), Google Photos might be a dream come true. The main reason to organize is to be able to find stuff later, right? Google Photos has insane algorithms at image recognition, so it will find things for you.

For example, their people recognition is off the charts. I just took a look at my “people and pets” page and it cataloged images of my mother, known to the NosillaCastaways as The Podmom. It had accurately found The Podmom in images from her last Christmas at age 94, black and white images of her in her 20s and even found her in the earliest photo I have of her about 3 years old. Why do I need to name and organize my photos into OCD-level albums if Google is able to do all of this for me?

Apple Photos does recognition of people as well, but you have to put in some effort to get it to work well. You have to train it to recognize people. It’s better than it used to be, especially since People now syncs across devices, but it doesn’t find nearly as many matches all by itself.

Apple Photos uses it’s image recognition in other ways too. For example, you can search for categories like bridges or dogs. But Google Photos goes way beyond that. For example, you may have noticed I referred to my “people and pets” section on Google Photos. Yes, they recognize YOUR pets. It’s obviously whatever animals for whom you have a ton of photos, but I could see our dog Tesla, our two cats Ada and Grace, and Lindsay’s dog Dodger. Pretty amazing.

So how does Google do this so much better than Apple? From what I understand, they use your images along with everyone else’s, to do pattern recognition with machine learning. They don’t explicitly share your images with the world, but they definitely use them in their massive algorithms.

If privacy is a high priority for you, then Apple’s on-device algorithms might be more to your tastes. They don’t pile your images together with everyone else’s so you’re less exposed, but as a result, they don’t get the accuracy that Google can provide. In iOS 11 Apple has finally started syncing the facial recognition across your devices, which is awesome.

But what if you want to share photos with others?

When we went on our big trip to the Galapagos Islands, the folks on the boat asked me to find a way for us to easily share our photos to each other after the trip. I looked at many options (Shutterfly, Flickr, Smugmug, Facebook) and the easiest and most cross-platform place was Google Photos.

I was able to make an album with the best of my photos and then simply invite all of our travelers to join as contributors. I didn’t have to provide them any instructions, and even those with the lowest technical skills were able to at least view the photos.

Apple Photos does have album sharing but you only get the ability for others to add to an album if they use Apple devices. You can share an album to a public website and non-Apple people can view and download your images, but non-Apple folks can’t add their own images.

So what have we learned?

Unless you care deeply about privacy and don’t want your images used by Google, I think the right answer might be to use both. Use iCloud Photo Library and the great image editing on the Mac and have those images synced across your Apple devices, but then tell Google Photos to sync your Apple Photos library which lets you play with your images across all of your devices, regardless of platform.