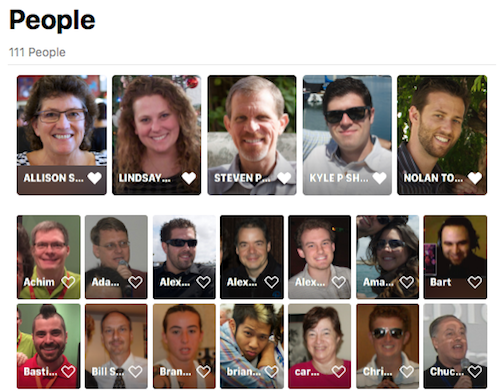 You probably know that the Photos app on Mac and IOS has a feature where we can name people(s) in individual photos and then those people will be grouped together and added to the default People Album in the app. Sort of like keywording, but using the person’s name instead. In addition to us naming people ourselves, Photos app uses its own algorithms to identify people and that helps quite a bit in moving the naming process along.

For example, Photos app would try and find all the photos that have pictures of Uncle Ralph and then offer to add Uncle Ralph’s name to each and add those photos to the ones I had also named with Uncle Ralph. It’s not perfect but definitely better than having to sort through each of my 15000 photos trying to name all my friends and family members individually.

Prior to the release of High Sierra and IOS 11, it was necessary to name people on each computer or IOS device separately. There was no syncing of peoples names between devices sharing the same iCloud account. But now with Apples latest software updates syncing is available so that if you name someone on your mac, that name syncs over to any other device or Mac using the same iCloud account.

So if you wanted to see all the pictures of Uncle Ralph, you could go to the Peoples album and click on the image of Uncle Ralph, and voila, all the photos where you identified Uncle Ralph appear grouped together on each device you own. Very handy.

In my case, over the past couple years I have been haphazardly naming people in Photos on each of my computers and IOS devices, none of which synced, which left me with 4 separate People albums with a lot of inconsistent naming. Now with the advent of iCloud syncing, what I wanted to do is start over…wipe out all the names of people I had previously entered and then begin again on my iMac, knowing that all those newly identified people would also sync to my MacBook, iPhone, and iPad.

So what’s the problem to be solved?

Everything I read in Apple help or on the internet described how to rename one person at a time. As I have over 15000 photos, that would take me forever to go to each photo, delete any names previously entered by me or by Apple, and then add the names again. Photos app does have a function where you can merge two or more incorrectly named people to reduce the clutter, but even that would take forever trying to find all the inconsistent naming data and then merging them together for each person.

What I needed was a Reset All button that would clear all the names I had previously entered. But after asking around and checking the interwebs, I could not find any way to do that.

Then I got lucky. I was on my iMac and clicked on the People album in the left sidebar. Up popped the usual garbled mess of images and names resulting from all my prior naming efforts. In a fit of frustration, I selected all the photos in the People album, (not all the photos in my main photo library) and hit the Delete button. Much to my surprise, it didn’t delete anything. Instead, it offered to reset all the names in my People album that I had previously entered.

Exactly what I was looking for. After making a backup of my current Photo Library, I clicked delete and all the names I had entered disappeared, and Photos started reindexing all my photos, searching for names to apply. Again, exactly what I wanted. It’s now been 3 days since I reset, and all my devices are still “updating” with the cloud, but slowly but surely I’ve been able to rebuild my People album exactly the way I wanted it, all synced across all my devices. Amen and Hallelujah!

So if you want to start over naming people in your People album, this is the way to do it. One word of caution, it is a fair amount of work to rename everyone all over again, even with the help of Apple’s algorithms so make sure you are willing to put in the effort. For me, ending up with a clean, manageable and searchable People album synced across all my devices was definitely worth the effort.