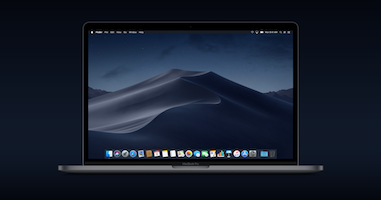 Several times over the years, I’ve played around with Virtual Machines, also known as VMs. A VM is really handy if you want to run two different operating systems on one computer. One OS becomes the host OS, the other(s) become the guest(s). If you sometimes need Windows but you want a Mac, having Windows in a VM can give you the best of both worlds. If you want to try your hand at learning Linux, a VM is a great solution.

A while back, Apple started letting us install macOS inside a VM. They weren’t completely free with it though – they don’t endorse running macOS as a guest on a Windows host, just macOS as a guest on macOS. You might be wondering what advantage that might give you.

How about when a new public beta comes out for macOS Mojave? Maybe you want to play around but you don’t have a spare Mac and can’t risk messing up your only computer. But you also can’t resist the temptation?

As you know I’ve been really worried about the lack of support for Clarify because it’s only 32-bit and all apps will have to be 64-bit to run on macOS in our near future. I got to thinking that maybe a VM would solve my problem.

High Sierra as a Guest on Mojave

I started by messing around with my 2013 MacBook Pro that I keep around for just such an endeavor. There are several good options on how to install a virtual machine. You can go with the free, open source Virtual Box from virtualbox.org, currently run by Oracle but originally invented by Sun Microsystems. It’s not got a lot of polish but it’s an interesting solution if you’re just playing around and don’t want to pay any money.

There are two commercial products, VMware Fusion from vmware.com and Parallels Desktop from parallels.com which are both $80 for home and student use. You can’t go wrong with either one but I’ve got a soft spot for the folks at Parallels because I’m so in love with their Parallels Toolbox software. Yes, I’m still paying $10/year for Parallels Toolbox and wouldn’t give it up.

I followed the usual instructions to make a bootable installer of High Sierra that you can find just about anywhere online. I installed Virtual Box and it wouldn’t recognize the bootable installer. I, of course, started pestering my research assistant Steven Goetz, and he said it had to be an ISO, not a DMG. (Remember the fascinating discussion we had about the different types of archive, compression and encryption, including ISO and DMG?)

Once I had that up and running, I was ready to upgrade my 2013 Mac to Mojave. To play in the public beta program with Apple, you have to register your Apple ID, and you also have to enroll the machine in the public beta. It’s free but that enrolling step installs a little application on your Mac that tells the Mac App Store to reveal the beta software to you.

I upgraded the 2013 MacBook Pro to Mojave and of course immediately turned on dark mode. It sure is pretty, I have to say. But looking at a pretty operating system wasn’t the real challenge. It was finally time for my grand experiment.

I launched my High Sierra VM as a guest inside my Mojave host OS and it worked beautifully. Just to make things really mind-bending, I turned on what they call coherence mode. This mode allows the application windows of the guest OS to float around with the windows from host OS. It’s really freaky to see bright white High Sierra and Mojave dark mode windows just cavorting about together on screen.

Not sure if you remember the problem I was trying to solve, but I’ll refresh your memory. I wanted to test running Clarify in High Sierra while in a VM on Mojave. I downloaded and installed Clarify in High Sierra, and then realized that I’m an idiot. If Clarify is inside High Sierra as a VM, it can’t possibly take screenshots of what’s going on in Mojave!

So unless I want to replicate everything I’m trying to document inside the old OS, this is a totally dumb solution to the problem. I wrote to Steven admitting I was an idiot and how sad I was that this solution wouldn’t work, that with Mojave my beloved Clarify would finally die. I am such an idiot.

And that’s when Steven told me that Mojave is NOT the OS that will stop 32-bit apps from working! I couldn’t believe such good news, but he sent me a link to a 9to5Mac article with a photo of a slide Apple showed at WWDC that very clearly says, “Mojave is the last macOS release to support 32-bit apps”!

I did the biggest happy dance you’ve ever seen when he showed me that. I wondered why the Blue Mango Learning folks (makers of Clarify and ScreenSteps) hadn’t already gotten a solution to their 32-bit problem! I expected more panic in the streets and now I know why I’m the only one who was freaked out.

After I got down off the ceiling I decided to do the reverse on my production 2016 MacBook Pro. I had to enroll this Mac in the beta program just like I did with the 2013.

I installed Parallels Desktop again and tried to install Mojave inside it as a guest, using a bootable installer DMG I made from the usual instructions. Guess what? It didn’t work. So I wrote to Steven again and you know what he said? It’s looking for an ISO, not a DMG!

Ok, FINE. Steven was right. He found me some really fun Terminal commands that would take the installer app that downloads from the Mac App Store for Mojave and turns it into an ISO. The instructions are at tylermade.net/… Technically they’re for High Sierra but I cracked the code on how to replace High Sierra with Mojave in the instructions.

Would you believe Steven was right? Once I had the ISO made, both Virtual Box and Parallels Desktop recognized the ISO. Sheesh, he really should have told me this sooner, don’t you think? In Parallels Desktop it did one better, as soon as it got to the part where you choose an OS, it saw my ISO and offered to install it.

The cool part was I was chatting with Steven while installing a beta OS into a virtual machine on my laptop tethered to my cell phone…while Steve and I were driving down the highway back from Lindsay’s house. We live in such cool times!