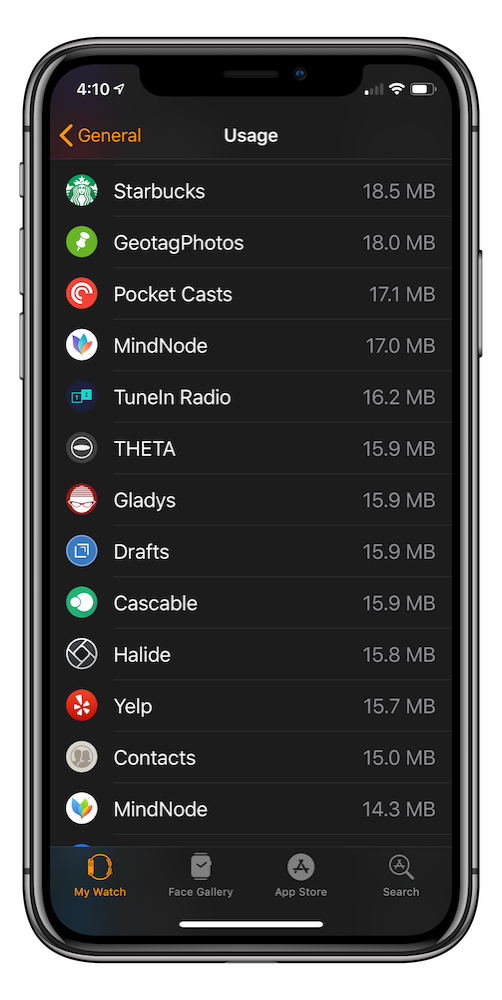 Do you know how much storage your Watch apps are using? Well I found out the hard way!

While on a bicycle ride to Darmstadt this week, I noticed that my watch at one point had stopped showing Average Speed and Distance. As you can imagine I feared that I might have run into a bug with the otherwise beautiful WatchOS 5. The workout was still running, so it surely couldn’t be terrible news.

As I arrived at my usual stop for a cup of tea, I stopped my workout without any indication that something might be wrong. However my activity rings didn’t change. That’s rather unusual as that little 55 minute workout does totally take care of both my Move and Exercise Ring in one go. I checked the Activity App, but my workout was missing.

As I started to dig deeper I found out that my Watch was out of memory. Out of memory?! How could that be? As I needed to head back home, I decided to quickly uninstall some apps and change the Photo sync from 100 to 25 images. That was good enough to get me home.

Once back I did look into this some more. You get a list of your apps and their storage usage by going to Watch App > My Watch > General > Usage. Overcast was using nearly 750MB space.

So maybe Overcast was partially to blame for my problem, so I started to look into the Overcast Settings. I must say, beautiful as the app is, the settings can be confusing. There is a lovely section labelled „Advanced“ with an „easy“ to comprehend section „Nitpicky Details“, which held the answer.

Auto-Sync to Watch was switched on, but I don’t remember ever toggling that switch. It must be the default and if you ask me, it’s a terrible choice. I am sure that this is an awesome feature for those Watch users with LTE, who leave their phone behind when going on a workout – but I am not one of them.

After I had posted this to the NosillaCastaways Facebook page I got some feedback from Rick Abraham who reported Overcast having used 900MB of data. Rick added that „…in order to fully clear the space Overcast was using on [his] Watch, [he] had to uninstall [it] from [his] Watch and then reinstall…“ – that’s not my experience, but it might be useful info for you.

Very long story short: maybe it is time for you to double-check what Watch Apps you really want and need on your Watch and just maybe, which of these are using a silly amount of storage.

After Claus wrote this up for us, Marco Arment, the developer of Overcast posted on Twitter that he changed this default behavior. In update 5.0.2 amongst other improvements, he added a feature called Selective Watch Auto-Sync. He also changed the default from all podcasts to 10.

Claus suggested I not post this article, but he highlights something that could bite any of us from other applications. After reading what happened, I checked the storage on my Apple Watch (I’d never thought to check it before, and discovered that Apple Podcasts was using up 1.2GB on my Watch! I don’t even use Apple Podcasts. I only subscribed to my own shows to make sure they were feeding properly, but that’s it. I don’t know how it ended up chewing up that much space since when I checked on my Phone there was only one episode in each feed.

Thanks to Claus for this great tip.