Pixelmator Photo for iPad was launched, rather fortuitously, just before I went on holiday. It turned out to be almost the perfect app for processing RAW photos from my DSLR camera while on the go.

There are some key features of Pixelmator Photo that stand out for me over other iOS photo apps.

Pixelmator Photo can import images from your iCloud Photo Library, which is nothing unusual, but when you’re done processing your image you can either save it back to the original as an edit (allowing for Photos’ native “revert to original” capability) or as a new photo. For more power, Pixelmator Photo lets you use the iOS file picker and this is incredibly versatile, as you can open and save images with any service that integrates with the Files app, such as Dropbox, OneDrive, or iCloud Drive itself. With Pixelmator Photo’s Share Sheet item, you can open a picture directly from almost anywhere. 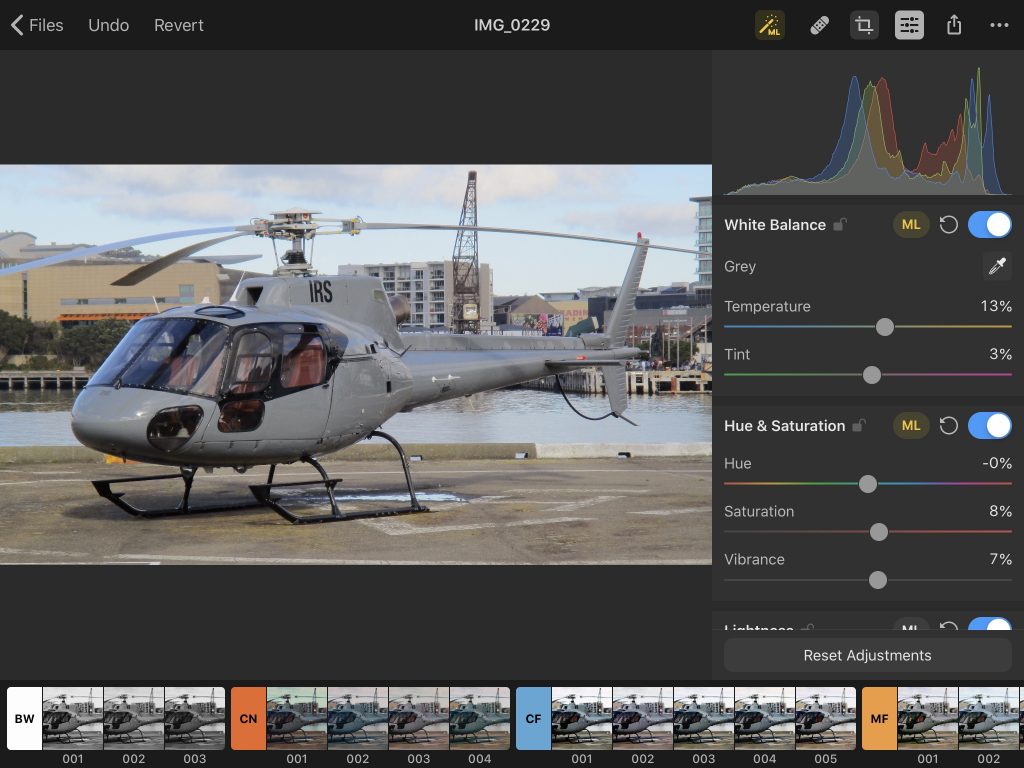 Pixelmator Photo handles RAW images using iOS built in support so can understand images from over 500 different camera models. You can then seamlessly and quickly perform non-destructive processing on the image with the full dynamic range that RAW files provide. In my use of the app there was NO lag of any kind when adjusting sliders on a 24 megapixel, 14-bit RAW file which weighs in over 30 megabytes in size. As a test, I opened one such RAW file using the FileExplorer application’s network connection over wifi to my Mac to fetch the file off an external SSD. I had the photo in front of me and editable in 8 seconds.

If you’re not sure what sliders to tweak, you can ask Pixelmator Photo to use its built in machine learning capability to have a go at improving your photo. A single tap on the main toolbar “ML” button sets Lightness, White Balance, Hue & Saturation, Selective Colour, and Colour Balance in one go, or you can selectively apply machine learning to any of these within those tools. If you’re not happy with the result, you can either undo the machine learning, or use that as a starting point.

The rest of Pixelmator Photo is quite like other photo processing apps, though it is clearly aimed at exactly that… photo processing. If you open the adjustments panel it contains a series of blocks for White Balance, Hue and Saturation, Lightness, Colour Balance, Selective Colour, Levels, Curves, Replace Colour, Black and White, Colour Monochrome, Sepia, Fade, Channel Mixer, Invert, Sharpen, and Grain. Each of these blocks has one or more sliders and in some cases additional controls. The range and quality of these panels is high — it’s closer to Lightroom or Aperture than Apple’s Photos.

I did miss a couple of features that Pixelmator Photo does not have… yet. There is no noise reduction and no vignette tool. I’ve mentioned this in the Pixelmator forums and am told both are being worked on and are coming “soon.” With those two features added, Pixelmator Photo will be a one stop shop for me for photo processing on the go.

Other tools include a crop, straighten, and perspective tool, and a healing tool. The cropping tool offers a machine learning option which is always interesting to try. Otherwise you can crop to any of the usual array of preset aspect ratios or completely freeform. There’s also a three colour histogram in the adjustments pane to help you with balancing your image.

Finally, there are 49 preset looks you can apply to your photos to get an instant result. These are grouped under Black and White, Cinematic, Classic Films, Modern Films, Landscape, Vintage, Urban, Night, and Pixelmator Pro.

If all these controls overwhelm you and you end up with a bad looking photo, there’s the Undo button or even the nuclear option of the Revert button to take you right back to the start.

For all the power packed into Pixelmator Photo, I found the interface to be largely intuitive, though it’s worth reading through the online help which is easily accessible within the app.

After hearing about all of this power and quality, you’d be forgiven for thinking Pixelmator Photo must be expensive. It is available in the App Store for only $4.99.

Finally, it is worth noting that the release of iOS 13 later this year will allow Pixelmator Photo to directly access photos either on an SD card or attached camera using one of Apple’s Camera Connection Kits.