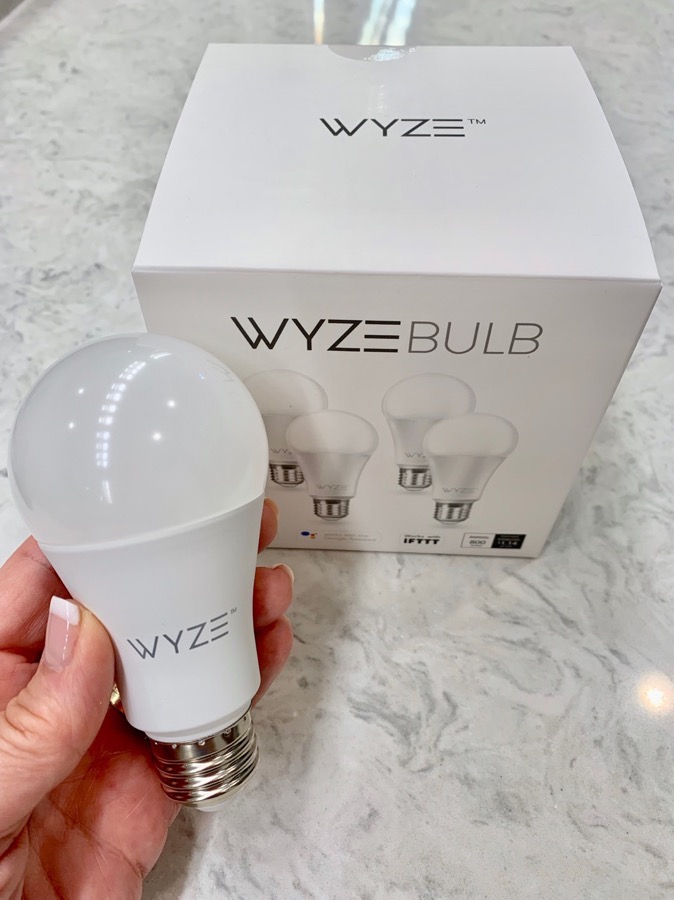 If you’ve been listening to the show for a long time, you know I’m a huge fan of the company Wyze, makers of a delightful and inexpensive security camera called Wyze Cam. Wyze branched out a while ago to add the Wzye Motion sensor and proximity sensors called Wyze Sense (think door/window open/close sensing). The theme of Wyze is to bring commodity hardware smart devices to us at incredibly low-cost but with really good software. This week they began shipping pre-orders of their new Wyze Bulbs. They’ve definitely done it again.

But before I tell you about the Wyze Bulbs, I want to tell you a story of one of the reasons I love this company so much.

In November 2017, the internet was hit with a vulnerability called KRACK. It affected pretty much every WiFi device, but a patched router would probably keep you safe, even if your devices inside your firewall were not patched.

I bought my first Wyze Cam in January of 2018 on the advice of good friend and fellow NosillaCastaway Joe La Greca. I wrote to support at Wyze to find out if they had patched their devices for the KRACK vulnerability. It was explained to me that since they buy the hardware from a commodity vendor, they don’t have a lot of influence over the hardware/firmware in the device. The tech support person promised to keep making noise to get it fixed by their hardware vendor.

I set up a schedule to bother Wyze every few months. After several times of bothering them, I found out it was the same guy writing back each time, a gentleman named Max Stoneking. Max eventually told me that I didn’t have to keep pinging him, because he had a Post-It note on his monitor to remind him to let me know when KRACK got fixed. He told me he even kept the Post-In note on his monitor when they moved offices! In January of this year, I had the pleasure of meeting Max in person at CES and we chatted yet again about KRACK.

Well, I have a big announcement to make. This week I got an email from Max that I’d like to read to you:

Hey! I just got this update, we have implemented the KRACK fix as of firmware version .108 for both Pan and Wyze Cam. Have a great day!

How awesome is that? The more I deal with Wyze, the better I like the company.

About the Wyze Bulbs

Ok, with that fun story complete, let’s take a look at the Wyze Bulbs. Like my Wyze Sense devices, I bought the Wyze Bulbs via their Early Access Program. We don’t get special pricing or anything, but we get early delivery and we get a special discussion forum just for those willing to buy before reviews are out. Makes me feel like one of the cool kids.

Traditionally, smart bulbs have been stupid expensive. I think we paid around $100 each for the Phillips color Hue bulbs ages ago. Even today, Philips sells the Hue White bulbs in a 4-pack for $48. In contrast, the equivalent Wyze smart bulbs are $30 for a 4-pack. That’s 38% cheaper! Wyze Bulbs are WiFi connected, and so do not require any kind of hub, while the Hue Bulbs do require a hub which is an extra expense and complexity. 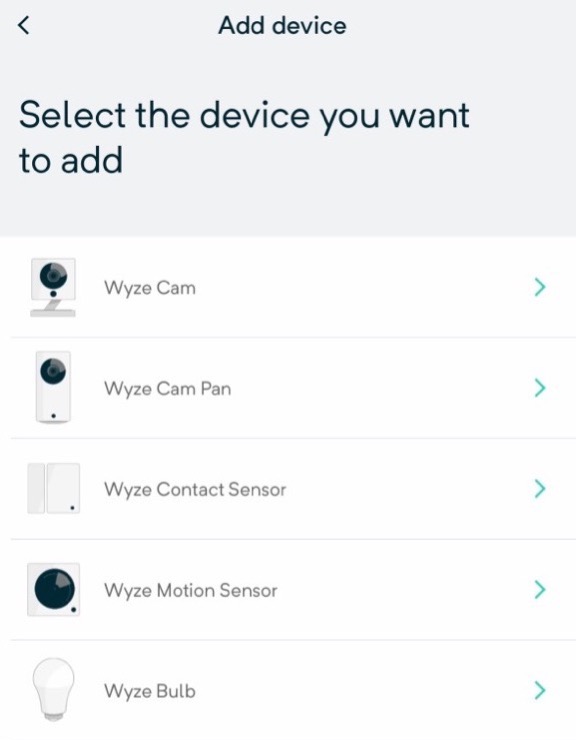 The thing that didn’t surprise me at all was how easy it was to set up a Wyze Bulb. They really come through on the promise of ease of their software. The steps are:

And you know the last step, right? Let’s all sing along – apply a firmware update!

I’m mocking but I really like that Wyze comes out with pretty frequent firmware updates. They’re often bug fixes but just as often we get really cool feature updates. For example, they just added the ability for the cameras to detect people. That way you can make rules on whether the camera kicks on for only people or for every possible disturbance it views. You can even apply automation to other Wyze devices based on whether a camera sees a person.

While Hue bulbs work with all of the voice assistants, Wyze works with Amazon and Google’s Voice assistants, but not HomeKit. Don’t think I don’t nag Max about this. I thought maybe I’d connect Amazon’s voice assistant to my bulbs but as I started to add the skill I got a popup asking permission to “Give Amazon access to all of your cameras?” I have to say I backed out and quit the app. And that’s Amazon, not even Google. I know, my Ring cameras are now owned by Amazon, but I’ve got a little piece of mind because all of my Ring devices are outside my house. Wyze already can see inside my house, I’m not super excited about letting a second company do that.

In my experience with Home Automation using HomeKit, I don’t really like automation where you have to talk to it anyway. Running around the house yelling at it to do things isn’t nearly as enjoyable as having the house do what you want without you asking for it.

I’ve got lots of automation that knows what I want without me having to talk to the house. The Hue light in the family room comes on when I walk into the room. It turns red when the front door unlocks and it turns green when the door locks again, and then back to white a few minutes later. 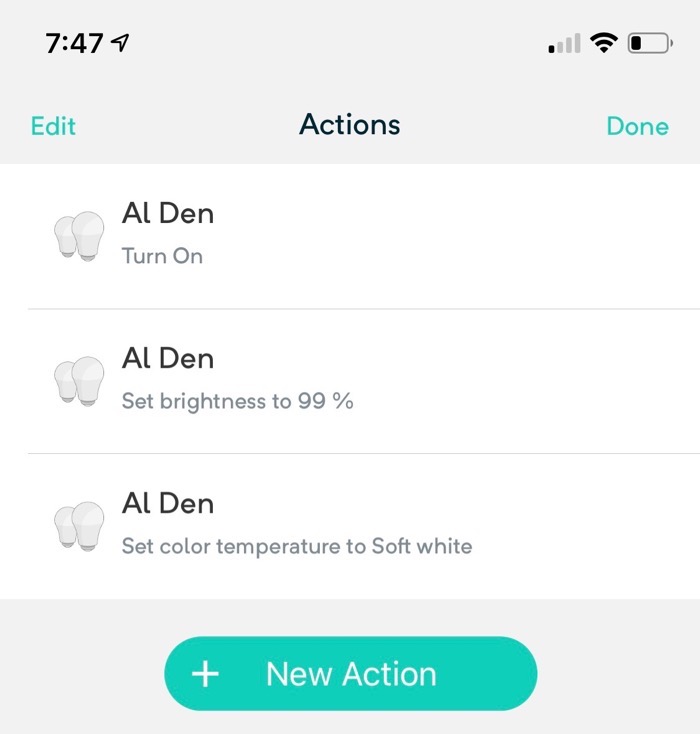 Wyze bulbs can be trained to do our bidding too. There are 3 terms to know: shortcuts, actions and automation. It’s easier to explain in reverse order. An Automation is how you want the shortcut to be triggered. You can trigger via a time of day, or via an event. Events are triggered by devices. If you want motion sensing, you can use one of your Wyze Cams which have built in motion detection, and even to only do something when the camera sees a person. That way you don’t have things happening when those rotten cats are scampering around at night.

But what if the light is in a bedroom or some other room that creeps you out to have a camera? Enter the adorable $6 Wyze Motion sensor which is the perfect tool for the job. You can choose to have this automation occur when the Motion sensor detects motion, becomes clear, or has experienced one of those conditions for a certain amount of time. I think that’s to eliminate the problem of the lights turning off if you don’t move for a few minutes.

Now that you have an event, you can define what you want to have happen when that event occurs, and that’s called Actions. I put two bulbs in my den, and grouped them with the name Al Den. The actions I chose was to turn them on, and to set brightness to full and color temperature to the middle white.

I mentioned that you can either have the automation triggered by an event or by time of day, but not both. In my den I can have the lights come on when the Motion sensor detects motion, but I can’t say to only do that during the daytime. I asked about this in the double-secret, exclusive early access forum for Wyze, and within an hour or so WyzeMike answered that they have built a Conditions feature which will allow us to limit the action to only certain times or days and it’s coming in one of the next updates. So, yay!

To recap, you build shortcuts that are triggered by events, and cause an action through an automation. It’s flexible but it is a bit to keep track of. Once you have the shortcut built, you can choose whether to have it shown on the home screen of your app. In my example, I can now tap a single button and my Al Den bulb group will turn on. I created a second shortcut to turn the lights off when the motion sensor hasn’t detected motion for one minute.

Now the trick will be to remember to take the motion sensor out of my den or at least make it face a wall when we have company stay over since my den is also a guest room!

The bottom line is that I really like the devices Wyze makes. They’re simple, do what they say on the tin, they’re inexpensive, the app is really good, they’re doing security right (according to Steve Gibson of Security Now) and most importantly, the company itself is super responsive, and is iterating quickly. I wish they were HomeKit-compatible, but maybe my nagging will make that happen some day!

If you’re interested in all things Wyze, check them out at wyze.com.