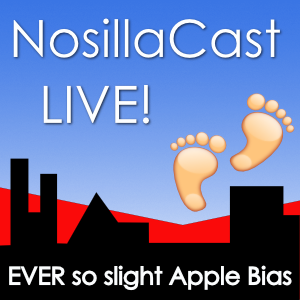 Hi, this is Allison Sheridan of the NosillaCast Apple Podcast, hosted at Podfeet.com, a technology geek podcast with an EVER so slight Apple bias. Today is Sunday, December 1, 2019, and this is show number 760. We’ve got a great show for you this week with some Tesla Tech, my quest to leave Wunderlist and Security Bits with Bart Busschots, but I think my favorite part will be the ad in the middle, also known as “pledge break” by the irrepressible Frank Petrie.

Bart demonstrates the value of these concepts in the succinctness of his code examples. In the last 15 minutes or so of the episodes, he gives us his solution to a challenge for those who have finished their homework. Before he gives us the solution, Bart and I yell “spoiler alert!” And make alarming noises you can’t possibly miss. The problem to be solved is to create a little web app that generates the Fibonacci sequence on screen. Bart’s solution is a fantastic example of the elegance of the tools we have at hand.

In one little HTML file with a grand total of 166 lines, half of which are comments or line feeds, jQuery allows him to cleanly access HTML elements, ES6 allows him to cleanly add actions to buttons in his form, and Bootstrap makes the buttons and form gorgeous. It’s a fabulous example of how the tools make it so much easier and quicker to make beautiful web apps.

I had fun even though it was a bit head bendy. You can listen to this week’s Programming By Stealth in your podcatcher of choice, or listen at podfeet.com/…, or even better, listen along and read along over at bartbusschots.ie/…

My Quest to Leave Wunderlist

We’ll return to our podcast in a few minutes with our next segment on why urbanites find turn  signals so cumbersome and difficult to operate.  I mean honestly, who would have thought that could be passed on genetically?

 But first, I’d like to tell you how you can help bring such questionable content to yourself each and  every week .  It’s through  donations from such generous and ill-advised people such as yourselves .

Your monthly Patreon gift of whatever you can afford, be it $5, $10, or your firstborn helps produce such informative programming and helps the Sheridans pay off their extensive home renovation.   And if you donate now, you’ll receive a special limited one-time offer – to be announced  sometime after we receive the money . 

And if you’re weary of subscriptions  or even  somewhat fond of your child , there’s also a Paypal button at ‘podfeet.com/helptheshow’ for single time donations. (COUGH-Cheapskate-COUGH)

Or do you prefer to skate on through ? You can still help with an  anonymous review in iTunes, ask a Dumb Question, or record a review. Or perhaps even buff wax Allison’s Tesla.

Don’t make her rise early every morning and head outside to scour for aluminum cans she can recycle, all under the ruse of closing her rings or earning badges. Let’s get her off the streets. It’s as simple as that. Even simpler than myself, in fact.

Thanks for your support.

Now we return you to this week’s next segment, courtesy of the Castaways, where Sandy shows us how to darn a sweater while negotiating Highway 101.

That’s going to wind this up for this week. Don’t forget to send in your Dumb Questions, comments and suggestions by emailing me at allison@podfeet.com, follow me on twitter @podfeet.  Remember, everything good starts with podfeet.com/. podfeet.com/patreon, podfeet.com/facebook, podfeet.com/slack!  And if you want to join in the fun of the live show, head on over to podfeet.com/live on Sunday nights at 5pm Pacific Time and join the friendly and enthusiastic NosillaCastaways.   Thanks for listening, and stay subscribed.