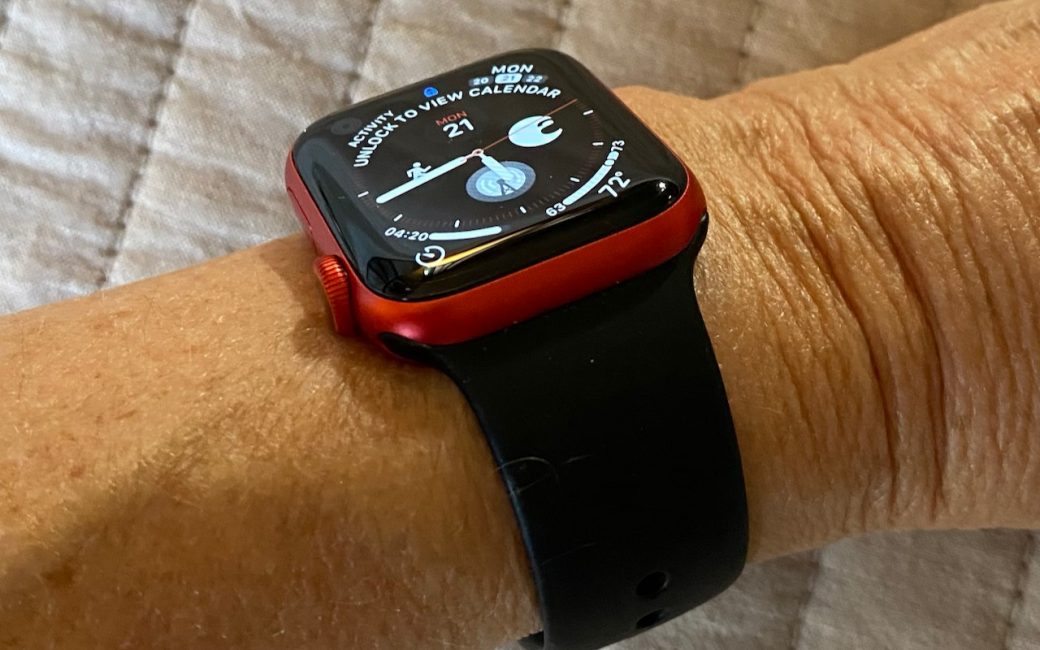 When the Series 5 came out, I bought that one too. The big wow feature was the Always On display. Sure it had a compass and noise detection, but it was that Always On display that was the big attraction. And I could not have been more disappointed to find out that having the screen Always On meant having a dead watch by 8 pm. I do two workouts a day, adding up to anywhere from 1.5 to 2 hours. Evidently Apple assumed people wouldn’t work out with their Apple Watches, or if they did work out, they’d get the 44mm watch instead of the 40mm.

I really did feel like I lit $500 on fire when I bought the Apple Watch Series 5. This battery problem was there from day one, and I even asked Apple for help and they had no advice other than to disable Always On, or to not enable a workout when I was working out because that used a lot of battery. Hey, why don’t I just leave it on the charger all day, it would probably have great battery life if I did that! Periodically over the last year, I’ve tried again and again to wear my watch with Always On enabled, but 100% of the time the watch died before I was ready for bed.

So what do you think I did when the Series 6 was available for pre-order? Of course I bought it. But this purchase was not a mistake.

I am delighted to say that the battery on the 40mm Apple Watch Series 6 is fantastic. I’ve only got two data points so far, but since I had a grand total of zero good data points on the Series 5, I’m declaring an early victory. I have left Always On enabled on the Series 6 for the past two days while I went about my normal workout schedule. On Tuesday I did 81 minutes of workouts and when I went to sleep I had 30% left. On Wednesday I did 132 minutes of exercise and when I went to bed I still had 25% left on my battery. This makes me giddy with joy.

There’s a reason for this great battery life. iFixit did a teardown of the Series 6 and discovered that the 40mm watch has an 8.5% increase in battery capacity (up to 1.024 W). The 44mm got a bit of a bump too but only an increase of 3.5%.

This isn’t a technical explanation but in the presentation they also said, “Because of its energy-efficient design, Series 6 has an even better Always On display.” And went on to explain that it’s 1.5 times brighter in sunlight. I’ll have to put on both the Series 5 and 6 and see if the 5 will stay alive long enough for me to observe that difference!

What’s amazing to me is that it’s also powering an ultrawideband antenna, an always-on altimeter, and taking blood oxygen levels periodically, and lasting all day. The bigger battery is of course a big part of it but the display in the Series 5 must have been pretty inefficient too.

All this technical stuff is really swell, but let’s talk about the best part about my new Apple Watch Series 6. I bought it in RED. I seriously think that over time that’s what will make me happiest about this watch. My Series 5 looked exactly like my Series 4 and I never loved it. My iPhone XS looked nearly identical to my iPhone X, and I thought that purchase was a waste of good money too. Even my 16″ MacBook Pro bored me quickly because I bought it in the same space grey of my 15″ from 3 years earlier. Color matters.

When I rushed to buy the Apple Watch Series 6, I really wanted to buy it with the new Solo Loop, but more specifically with the braided Solo Loop. I configured my watch but I could not get the “buy” button to light up. I exited and tried to buy on another device and again it wouldn’t let me buy it. On my third try, I noticed that the only band configuration that was actually available for preorder was the Project Red Sport Loop. I’m not a fan of the Sport Loop myself because it doesn’t dry quickly. This is a problem when I’m working out because I do work up a sweat, but I also like to keep my watch on when I shower. But, to get my precious red Apple Watch right away, I gave in and ordered it with the red sport loop.

If you listened to Chit Chat Across the Pond Lite #653 with Lory Gil, you heard her tell me that she went for the blue watch because she was afraid the red might be kind of chintzy looking. I think the red is simply gorgeous. Turns out Apple sent Lory a red Apple Watch Series 6 for review and she said the same thing.

I’ve heard people worried about buying the Product Red Apple Watch because they were afraid it would clash with some of their existing watch bands. This is a valid concern because guess what it clashes with? The red Sport Loop it ships with that I didn’t want to buy! This Sport Loop is just on the orange side of red and it does not look good at all with the deep red of the Apple Watch.

For Christmas one year, Steve indulged me with a Scarlet Modern Buckle (the leather one with the really cool clasp) and I thought, maybe that’s a deep enough red to go with the Product Red. Nope, it’s almost burgundy compared to the watch. I also have a regular Product Red Fluoroelastomer band and that one is pretty close to the color of the watch. It looks ok with it. Not amazing, but it’s fine.

I decided to put every single Apple-branded watch band I own on the Product Red Series 6 and take a photo to show you which ones look good and which ones don’t. I created a carousel of photos to show off the different bands so you can see for yourself.

I’m glad I did this, because I was rather surprised at what bands looked the best with the red Apple Watch. It’s the black and the red band. Black with red is outstanding – makes me think of my red Tesla it’s so cool looking. Might not be what most women would like but I think it’s stunning, and so does Steve. It’s hard to describe why the white with red looks so cool but the white really stands out against the red and I love it too.

Unsurprisingly, my lime green and canary yellow fluoroelastomer bands are positively garish with the red, so I’ll probably wear those when I’m mixing and matching garish colors of workout gear just to annoy Steve. A couple of other colors work well with the red, like the dusty blue and the Pride sport loop, but black and white are still my favorites.

The bottom line is that if you have a Series 5, you definitely don’t need a Series 6 but I found it to be a much bigger upgrade than I thought it would be. I’ve also decided that I will always try to change colors when I spend a lot of money on Apple gear so my brain is convinced it’s different enough to justify the cost.